WARNING: This video contains scenes from within the operating theatre. Viewer discretion is advised.

As a young man in his late 20s, Oupa Phetlhu had the world at his feet and much to look forward to, but life had other plans. Phetlhu developed a growth in his lower jaw, which slowly started eating away at the bone causing him intolerable pain.

Phetlhu told News24 he went to the dentist in 2015 to get a tooth removed, but after the procedure he began experiencing moderate pain, which worsened considerably over the next few years.

In 2017, while Phetlhu was working as a security guard in Bloemfontein, Free State, the right side of his face began to swell. 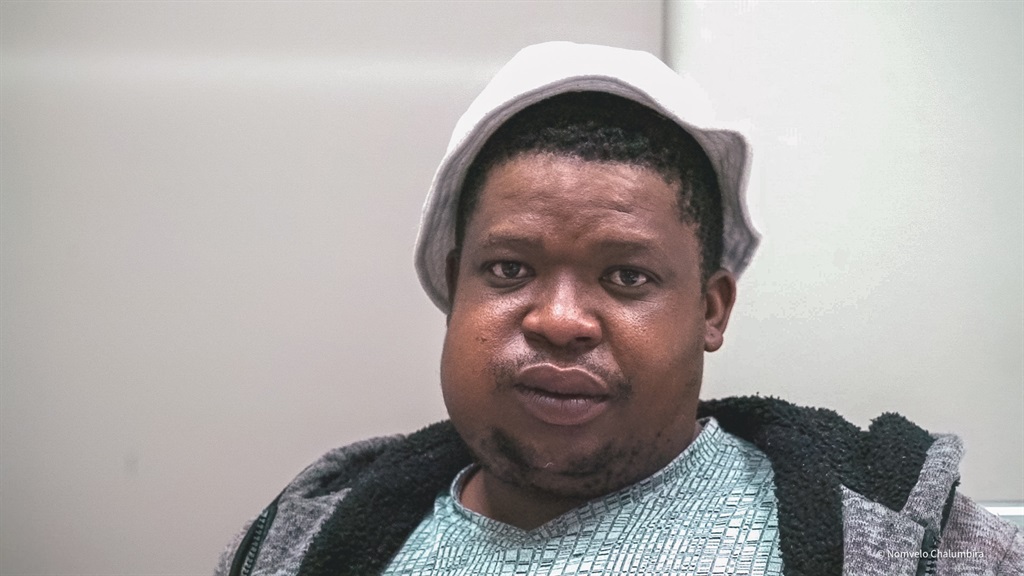 Prior to the surgery Oupa Phetlhu was in constant pain.
News24 Nomvelo Chalumbira

Frustrated by the pain and the lack of service, he went to the local hospital to try his luck. But the hospital offered him only painkillers to alleviate the pain.

"The illness wasn't treating him well. It's not nice seeing your child sick. You never want to see your child in pain," Phetlhu's mother Shobo May said.

Phetlhu stopped working and returned home. Their lives revolved around his condition.

Sometimes I couldn't speak and was in a lot of pain. So I decided to come home... When I came home, my mom could help me. She would take me to the clinic and various doctors.

After many months and various doctors' appointments, Phetlhu was diagnosed with Ameloblastoma - a rare non-cancerous (benign) tumour. It had developed on the right side of his jaw near his molars.

But he became disheartened by their prognosis: The doctors wanted to remove the tumour but offered no solution to replace the damaged bone.

"The first doctor told me that they would have to remove a part of my lower jaw bone to remove the tumour. I couldn't understand how they would do it. They didn't tell me how they would fill the missing bone and help me. I was scared and lost hope. I thought to myself, I would always have this tumour," Phetlhu said.

While he sought answers, the tumour kept growing and growing and destroying more and more of his jaw. Finally, years after his initial prognosis, Phetlhu was referred to a specialist who gave him the hope he needed. The entire surgery was carefully planned out on the computer.
News24 Nomvelo Chalumbira

Doctor Charles Van Niekerk, a Maxillofacial and oral surgeon, said he would remove the tumour and replace the damaged section of his jaw with a 3D printed titanium implant.

"He gave me hope for the first time in almost four years," Phetlhu said.

The Centre for Rapid Proto­typing and Manufacturing (CRPM) at the Central University of Technology (CUT), Free State, specialises in 3D printing medical implants and other devices.

They designed and manufactured Phetlhu's 3D printed titanium jaw implant at no cost to him.

It was manufactured layer by layer. A layer of fine bio-compatible titanium powder was placed on the platform and then infused with a laser beam and the process repeated until the implant was complete.

Prosthodontist and CRPM medical advisor, Doctor Cules van den Heever, told News24 that many of the patients he treats often wait too long to seek treatment due to their socioeconomic status and the lack of resources available in the government institutions.

These operations can be life-saving... If not treated, it can be a death sentence or very damaging to the patient's quality of life. These people end up like this because they are diagnosed late and end up with these huge defects.

"There is a huge backlog for maxillofacial surgeries and reconstruction. It's challenging for state hospitals to accommodate all the people, especially now during Covid-19. Some of these state patients or needy patients will require reconstructive surgery to better their quality of life. If you have a top jaw removed, then you can't swallow, you can't speak, you can't eat. It's crucial to remove cancer or the tumour and reconstruct to improve that quality of life. So, we must assist these patients. The need out in the community is very high," he added.

Gerrie Booysen, director of CRPM, told News24 that despite the high cost of designing and manufacturing these custom implants, it's vital for CRPM to help people in need. Some medical aids do not cover the treatments and the state cannot afford to step in.

"We want to make a change and improve the quality of life. We are sponsoring a lot of our time and the expenses of the machines," Booysen said.

CRPM and Selective Surgical collaborated and planned Phetlhu's surgery virtually using medical image data on a computer. His treatment started with a CT scan of the infected area. Once they had collected the data CRPM manufactured a nylon 3D printed pre-operative model and the 3D printed titanium plate which would replace a section of Phetlhu's jaw. 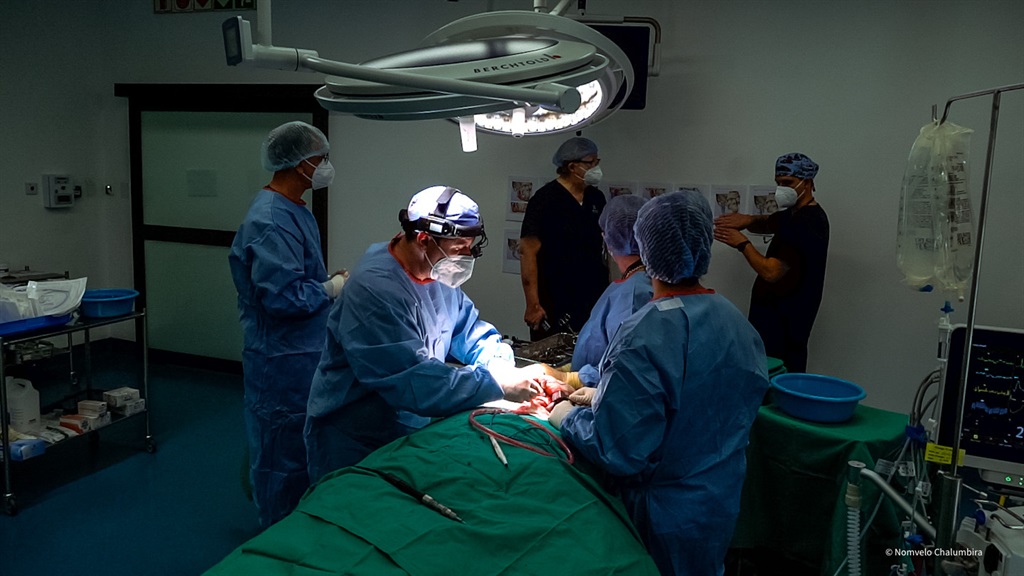 Oupa Phetlhu during the surgery at the EmoyaMed hospital in Bloemfontein. The operation was done pro-bono.
News24 Nomvelo Chalumbira

"The whole operation is planned on the computer. Your planning and CT scan better be accurate. The planning of these cases are vital, and we go to a lot of trouble to make sure that everything fits," Van den Heever said.

Selective Surgical provided the screws for the 3D titanium implant. Since it was a tricky surgery, CRPM also manufactured cutting guides for the surgeon - to show them exactly where to make incisions. In addition, a positioning guide was created to stabilise the fragments before the titanium jaw implant was placed once the surgeon removed the tumour.

The evening before the surgery, sitting in his hospital room enjoying his last meal before the big operation, Phetlhu told News24 he was feeling excited.

I am happy because I trust my doctor. I'm going to be Oupa again.

He said he was happy that the doctors would finally remove the tumour, and the pain would disappear.

On 29 June, the 33-year-old had his surgery done pro-bono at the newly built EmoyaMed hospital in Bloemfontein. 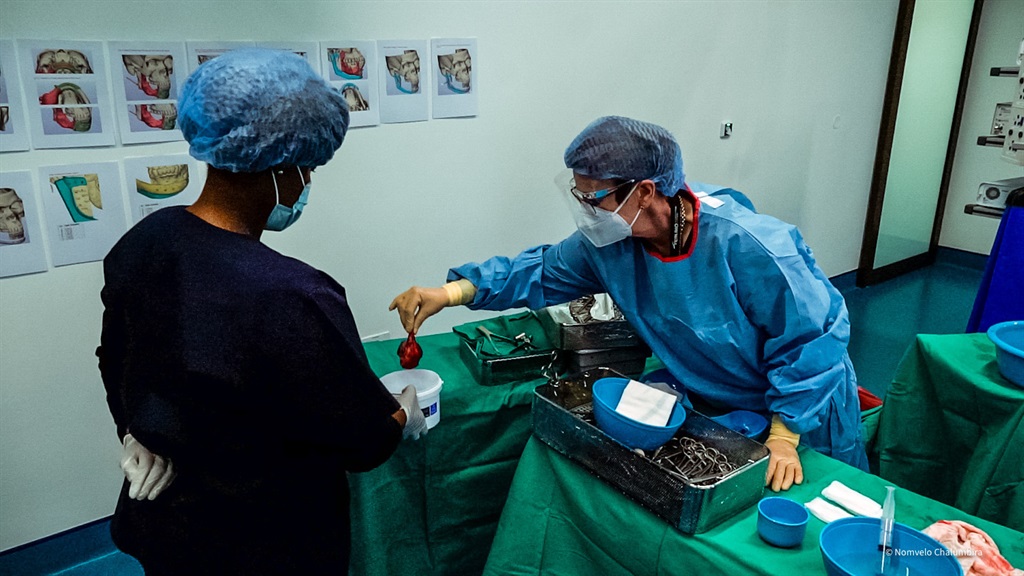 The benign tumour after it was removed from Oupa Phetlhu's face. 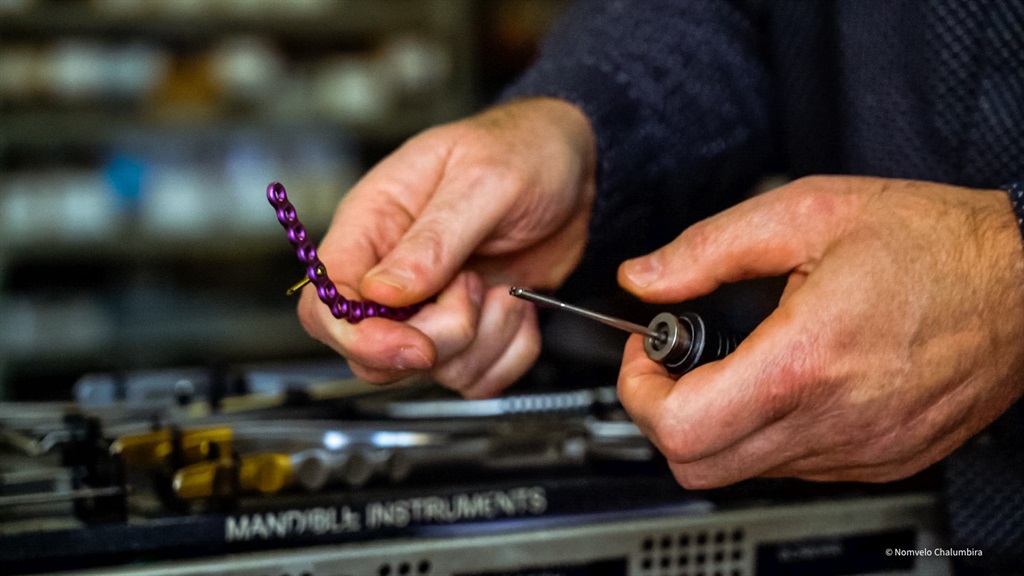 Selective Surgical manufactured cutting guides for the surgeon - to show them exactly where to make incisions.

Once home, Phetlhu's family threw him a party to celebrate the operation's success. They were thrilled to see remnants of the old Phetlhu after the surgery.

When News24 met Phetlhu a few weeks after the operation, he said he'd started living a full life again without any pain or shame because of the way he looked. All that remains is a scar that's barely visible beneath his beard.

"I don't have any pain anymore. I will go back to work because I wasted lots of years at home not working," he said.