WATCH: Pedestrian mowed down by taxi driving in the wrong lane 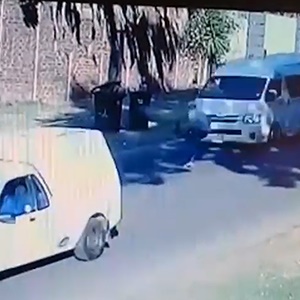 Pedestrain knocked down by taxi in Joburg north.

A taxi driving on the wrong side of the road knocked over a pedestrian in morning traffic in Sharonlea, Johannesburg on Monday.

The pedestrian survived the incident and was taken to hospital.

According to Sector 1 Community Policing Forum chairperson Desigan Pillay, the pedestrian was knocked over just after 07:00.

"The pedestrian was crossing the road when he was hit by a taxi driving [in] the oncoming lane," Pillay told News24.

"The driver of the taxi stopped and waited for police."

Johannesburg Metro Police Department (JMPD) spokesperson Wayne Minnaar said police were still investigating the incident and a case of reckless and negligent driving would be opened at the Sandton police station.

Pillay said the forum joined forces with the JMPD to tackle unlawful driving in the area.

We live in a world where facts and fiction get blurred
In times of uncertainty you need journalism you can trust. For 14 free days, you can have access to a world of in-depth analyses, investigative journalism, top opinions and a range of features. Journalism strengthens democracy. Invest in the future today. Thereafter you will be billed R75 per month. You can cancel anytime and if you cancel within 14 days you won't be billed.
Subscribe to News24
Related Links
WATCH: Bus torched in Khayelitsha ahead of taxi strike
Next on News24
WATCH | Tipping the scales: Cape Town woman pulls snake out from car with bare hands