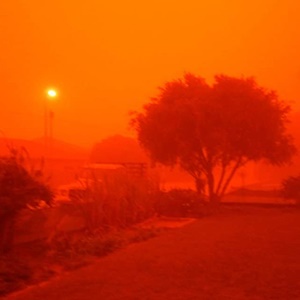 Apocalypse? Not just yet. But some may have believed it was the end of the world when Alexander Bay in the Northern Cape was hit by a red dust storm on Sunday morning.

The South African Weather Service had issued a warning of strong gale force winds over the weekend along the West Coast.

Forecaster Stella Nake said the storm was caused by "very strong offshore winds" and the red dust was due to the type of soil in the area.

"The wind averaged between 48 and 56km/h on Sunday morning for Alexander Bay with gust between 68 and 75km/h," she told News24.

She said storms such as this one were not usual except when weather conditions are favourable.

We live in a world where facts and fiction get blurred
In times of uncertainty you need journalism you can trust. For 14 free days, you can have access to a world of in-depth analyses, investigative journalism, top opinions and a range of features. Journalism strengthens democracy. Invest in the future today. Thereafter you will be billed R75 per month. You can cancel anytime and if you cancel within 14 days you won't be billed.
Subscribe to News24
Related Links
WATCH: Weekend hail leaves parts of Pretoria covered in ice
Next on News24
PODCAST | The Story: How one incident at Stellenbosch University sheds light on deeper issues