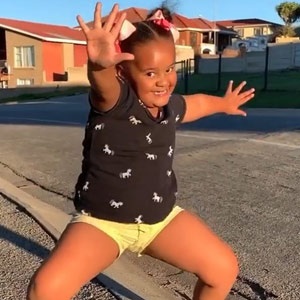 Ivanah Campbell's dance moves have stolen the hearts of international celebrities like Chris Evans and Will Smith.

The six-year-old dancer from Port Elizabeth has also made a name for herself locally with a Facebook following of almost 40 000.

News24 caught up with her ballet teacher Portia Appolis.

"What a bubbly and gorgeous child," Appolis said.

"She's just one of those kids that you know is going to be a star."

In one video, Ivanah is seen dancing to American singer Lizzo's "Juice".

Lizzo shared the footage online, commenting: "Rare footage of me as a child."

That video has been watched more than 42 000 times since it was posted on Facebook on Friday.

Commenting on the viral videos, Appolis said: "At her age, wow, I can't believe it!"

"She has the x-factor… You give her something and she adds a little extra," she told News24.

Attempts to reach out to the Campbell family for their comment on little Ivanah's new-found international fame has so far proved unsuccessful.

We live in a world where facts and fiction get blurred
In times of uncertainty you need journalism you can trust. For 14 free days, you can have access to a world of in-depth analyses, investigative journalism, top opinions and a range of features. Journalism strengthens democracy. Invest in the future today. Thereafter you will be billed R75 per month. You can cancel anytime and if you cancel within 14 days you won't be billed.
Subscribe to News24
Related Links
5 ways to raise a genius child: "Talent is made, not born"
Videos of Tiger Woods golfing as a kid show he's always been destined for greatness
Next on News24
WATCH | John Steenhuisen delivers DA's take on 'State of the Nation' address