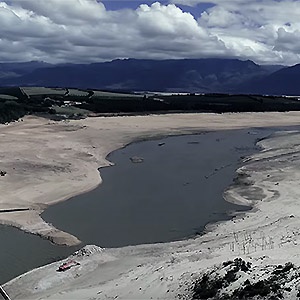 Aerial footage of the Theewaterskloof Dam captures the different stages of the Cape's three-year drought from November 2016 to March 2018.

The footage was filmed by Aerial Events, whose pilot Stephan Myburgh was among those who flew over the dam.

Myburgh describes the last two years as especially "overwhelming in a sad and also scary way..."

"Having aerial views of the dam gives a clear perspective of what reality is," he adds.

We live in a world where facts and fiction get blurred
In times of uncertainty you need journalism you can trust. For only R75 per month, you have access to a world of in-depth analyses, investigative journalism, top opinions and a range of features. Journalism strengthens democracy. Invest in the future today.
Subscribe to News24
Related Links
WATCH: Overjoyed Khayelitsha pupils cheer new borehole
WATCH: Waterfront desalination plant set to come online by month end - CT deputy mayor
WATCH: Special Report - Steenbras aquifer drilling too risky, ecologists warn
Next on News24
WATCH | Editors' Table: Zuma's day of reckoning - will he finally go on trial?