WATCH: Waitress who bagged R18K tip for 'amazing service' wants to use it to finish matric 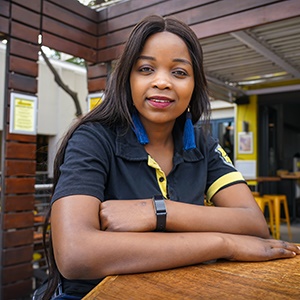 Waitress Ayanda Ndlovu sits outside BeerhouseFourways where she received a R18 000 tip from an anonymous customer. (Chanté Schatz, News24)

A Beerhouse Fourways waitress, who walked away with an R18 680 tip for her "amazing service", says she'll use the money to complete her matric. After that, she has her sights set on a career in emergency medical services.

Thirty-year-old Ayanda Ndlovu said that she was close to tears when she realised the money was left for her.

In a post on Beerhouse's official Facebook page, the initial bill came to R1 320, but the female patron decided to make a R20 000 payment.

The patron said the tip was due to Ndlovu's "amazing service".

"She asked me what I wanted to do and I told her I wanted to be a paramedic but I don't have the money," said Ndlovu.

Ndlovu, who has been working at the establishment for just over two years, told News24 that she was unable to finish her matric due to financial constraints.

"I had to leave school early and find work because me and my family were struggling. So I never got an opportunity to follow my dreams."

The generous patron - who wishes to remain anonymous - insisted the money be given to Ndlovu to pursue her studies.

"I have no want to reverse this, no second thoughts about it and I was of sound mind when deciding to leave this tip," the mystery benefactor said in a private WhatsApp message to Randolf Jorberg, the Beerhouse owner.

Ndlovu says her main goal now is to complete her studies and become a paramedic.

"We come across so many deaths everyday due to accidents. I just want to be that person who will be able to help people and save lives." Waitress Ayanda Ndlovu sits outside BeerhouseFourways where she received a R18 000 tip from an anonymous customer. (Chanté Schatz, News24)

Beerhouse general manager Fanent Zimba, told News24 that his first reaction was to reverse the transaction and pay the money back to the customer.

"I just thought about the incident where a customer tipped R20 000 at a restaurant that was later reclaimed the next day," he said.

A month ago, a waitress at a Paarl pub was also given a tip of almost R20 000 – until the tipper's wife asked for a refund the next morning.

Zimba notified head office about the tip and after discussions with the owner, the money was transferred into Ndlovu's account.

"I had to make sure that the customer was of sound mind and that she was sure she knew what she was doing."

Zimba, who has never encountered such a big tip before, said he hoped Ndlovu would use the money to follow her dreams.

We live in a world where facts and fiction get blurred
In times of uncertainty you need journalism you can trust. For 14 free days, you can have access to a world of in-depth analyses, investigative journalism, top opinions and a range of features. Journalism strengthens democracy. Invest in the future today. Thereafter you will be billed R75 per month. You can cancel anytime and if you cancel within 14 days you won't be billed.
Subscribe to News24
Next on News24
WATCH | It wasn't the crocodile's fault, says KZN wrangler who was bitten during live show