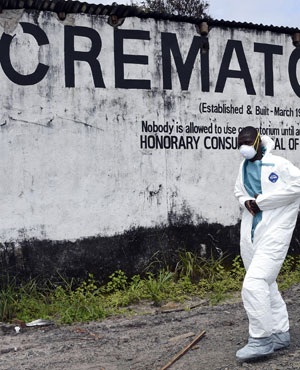 A medical staff member wearing a protective suit walks past the crematorium where victims of Ebola are burned, in Monrovia. (Pascal Guyot, AFP)

Geneva - The number of people with Ebola is set to hit 10 000 in West Africa, the World Health Organisation said, as the scramble to find a cure gathered pace.

The UN's public health body said 9 936 people in Guinea, Liberia and Sierra Leone - the three countries at the epicentre of the world's worst-ever Ebola epidemic - have contracted the disease. In total, 4 877 people have so far died.

With experts warning the rate of infections could reach 10 000 a week by early December, researchers around the world are scrambling to beat the tropical fever, for which there is currently no licensed treatment or vaccine.

The figures were released as the WHO in Geneva on Wednesday held its third round of emergency talks on Ebola, discussing efforts to combat the tropical fever. A press conference will be held on Thursday following the end of the talks.

The talks are expected to last two days.

Meanwhile doses of the experimental rVSV vaccine against Ebola arrived at the Geneva University Hospital from Canada.

The WHO is to co-ordinate trials of the vaccine in Geneva alongside those already under way in Germany, Gabon and Kenya.

The vaccine, developed at the National Microbiology Laboratory in Winnipeg, is one of two experimental Ebola vaccines identified by the WHO as having shown promising results when tested on monkeys.

WHO assistant director general Marie-Paule Kieny said the goal was to be able to ship initial supplies to Africa by early 2015, though mass vaccination campaigns are not yet on the cards.

"There is a very strong movement now from governments of many countries to push as quickly as possible these vaccines into real-world use," she said.

A key aim is to help guard health workers against Ebola - some 240 have died so far as they strive to care for desperate patients.

At the same time, the American Institute of Health announced it they had begun a clinical trial of a vaccine trialling it on 39 people. However, even if successful, the vaccine would not be available until next year.

Also Wednesday US pharmaceutical giant Johnson & Johnson announced it would spend $200m to accelerate an Ebola vaccine programme that is in development.

It plans tests on volunteers in January.

The Red Cross said it would be at least four months before the epidemic is contained, but only if all necessary steps are taken.

"It will be possible, as it was possible in the past, to contain this epidemic within four to six months" if the response is adequate, said Elhadj As Sy, chief of the International Federation of Red Cross and Red Crescent Societies (IFRC).

The latest death toll was announced on the same day as the United States tightened up its screening process for people entering the country from Guinea, Liberia and Sierra Leone, announcing that travellers from the three countries would undergo "active monitoring" for signs of the virus for 21 days.

The system aims to "further protect Americans against Ebola" by monitoring travellers for the entirety of the virus's incubation period, the US Centres for Disease Control and Prevention director Tom Frieden said.

The travellers will be asked to carry out daily self-checks for fever and provide contact details of friends or family in case follow-up is needed, he said.

The new measures came a day after the US Department of Homeland Security announced that all passengers from the affected region would have to fly into one of five airports that have additional screening measures in place.

At the same time, officials at Liberia's international airport began using databases to match relatives against lists of Ebola patients, in order to stop any boarding, even if they showed no symptoms and were not contagious, Binyah Kessely, the Liberian Airport Authority chairperson told AFP.

"We want to avoid being embarrassed whenever someone leaves Liberia to go to another country," he said, referring to two Liberian citizens who carried the virus into Nigeria in July and the United States in September.

In Sierra Leone, two people died in a riot which erupted on Tuesday when health workers tried to take a blood sample from a 90-year-old woman suspected of having Ebola.

A machete-wielding mob clashed with security personnel in the eastern town of Koidu and then went on a rampage, doctors told AFP. Several buildings were attacked and gangs of youths roamed the streets shouting "No more Ebola!"

In neighbouring Liberia, WHO found the number of cases had been underestimated, especially in the capital Monrovia.

But a member of the Doctors Without Borders team, working in the northern town of Foya told President Ellen Johnson Sirleaf, who was visiting, that the town could "soon be declared" Ebola free, after no new cases had been reported in three weeks.

Meanwhile, the latest contingent of 83 Cuban nurses and doctors headed to Liberia and Guinea on Wednesday bringing the total number of Cuban health workers in west Africa to at least 248.

In the US, a Texas nurse infected with Ebola after caring for a Liberian man who died from the disease no longer has the virus, her family said.

On Thursday, EU heads of government meet in Brussels and are expected to boost efforts in the fight against Ebola.

Here are your Lotto and Lotto Plus results
Full list of lottery results
Lockdown For
DAYS
HRS
MINS
Voting Booth
When assisting your child , did you:
Please select an option Oops! Something went wrong, please try again later.
Follow the school's comprehensive sexuality education (CSE) curriculum?
13% - 110 votes
Adjust the CSE curriculum to suit the family's morals?
24% - 197 votes
Ignore the schools CSE programme and do your own teaching?
63% - 514 votes
Previous Results
Podcasts
PODCAST | POLITICS UNMUTED: Turning the spotlight on the media