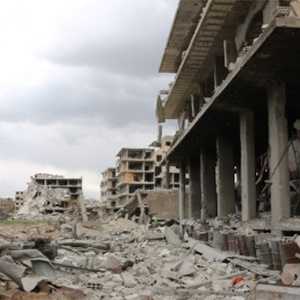 Destruction is seen in the former rebel-held town on the outskirts of the Syrian capital Damascus. (Screengrab)

Beirut — Syrian government and Russian warplanes on Saturday targeted the southern edge of Idlib province with the "most intense" airstrikes in weeks, according to activists and a war monitoring group, ratcheting up military pressure on the densely populated rebel-held bastion.

More than 60 air raids killed at least four civilians in southern Idlib, according to the Syrian Observatory for Human Rights and rescue workers. The bombings also included indiscriminate barrel bombs, dropped from choppers, invariably blamed on the government.

The bombings, including shelling from government areas, came a day after Iran and Russia backed a military campaign in the rebel-held area despite Turkey's pleas for a cease-fire. Turkey has troops and 12 observations points that circle Idlib.

But the government and Russian raids targeted a wide swath of rebel-held area in the southern edge of the rebel-held enclave that includes most of Idlib province and northern Hama province. More than 3 million people live in the area, nearly half of them already displaced from fighting elsewhere in Syria.

The Britain-based Syrian Observatory for Human Rights reported 68 air raids and 19 barrel bombs dropped Saturday on several of towns and villages in southwestern Idlib and Hama province. The area targeted over the past few days overlooks government-controlled areas.

The Observatory described the attacks on the rebel-held areas as the "most intense" since August and said they killed four in Abdeen, west of Khan Sheikhoun town, including two children and a woman.

The raids forced schools to close in Khan Sheikhoun, a town under attack, according to the Observatory.

The White Helmets, a team of first responders, also reported on the four people killed in Abdeen. The rescuers said another was killed in Halba, a village farther north. The group said one of its already damaged centers had been hit in the wave of airstrikes.

The local council of Morek, a town that serves as a crossing between Hama and Idlib, sent an urgent appeal, asking Turkey to intervene. "We need a quick solution or our town will burn!" the official pleaded in an audio recording shared on social media platforms.

Separately, clashes broke out in eastern Syria in Qamishli, a town close to the border with Turkey, between government and Kurdish security members. The Observatory said the clashes left 10 government security personnel and seven Kurdish fighters dead.

The town is run by Kurdish-led administrators and forces, but Syrian government troops hold pockets of territory there, including the airport. Occasional clashes erupt there over turf control and authority, reflecting deepening political tension between the uneasy partners.

Kurdish security forces, known as Asayish, said in a statement that a government patrol entered the areas controlled by the Kurdish militia in Qamishli and began arresting civilians, then shot at a Kurdish checkpoint sparking the gun battle. The Asayish said seven of its members and 11 government personnel were killed.

A journalist and area resident, Arin Sheikmos, said the government security troops carried out an arrest campaign in Kurdish-controlled areas, detaining people it accused of dodging military conscription. This prompted the clashes that lasted no more than 20 minutes, Sheikmos said.

There was no immediate comment on the clashes by the government.

The U.S.-backed Kurdish administration has recently begun talking with the Syrian government, seeking government recognition of its self-rule areas. But in recent days, the Damascus government announced that it will be holding local administration elections, including in Kurdish-ruled areas, undermining the negotiations with the Kurds and their proposal for self-rule.

The Kurdish-led administration control nearly 30% of Syria, mostly in the northeastern part of the country, including some of Syria's largest oil fields. They seized the territories, with the backing of the US-led coalition, after driving out Islamic State militants.

We live in a world where facts and fiction get blurred
In times of uncertainty you need journalism you can trust. For only R75 per month, you have access to a world of in-depth analyses, investigative journalism, top opinions and a range of features. Journalism strengthens democracy. Invest in the future today.
Subscribe to News24
Related Links
Counting Islamic State members, an impossible task
US to act 'very strongly' if Syria uses chemical arms: Bolton
Up to 30 000 Islamic State members in Iraq, Syria - UN report
Next on News24
WATCH | Latest news videos from around the world