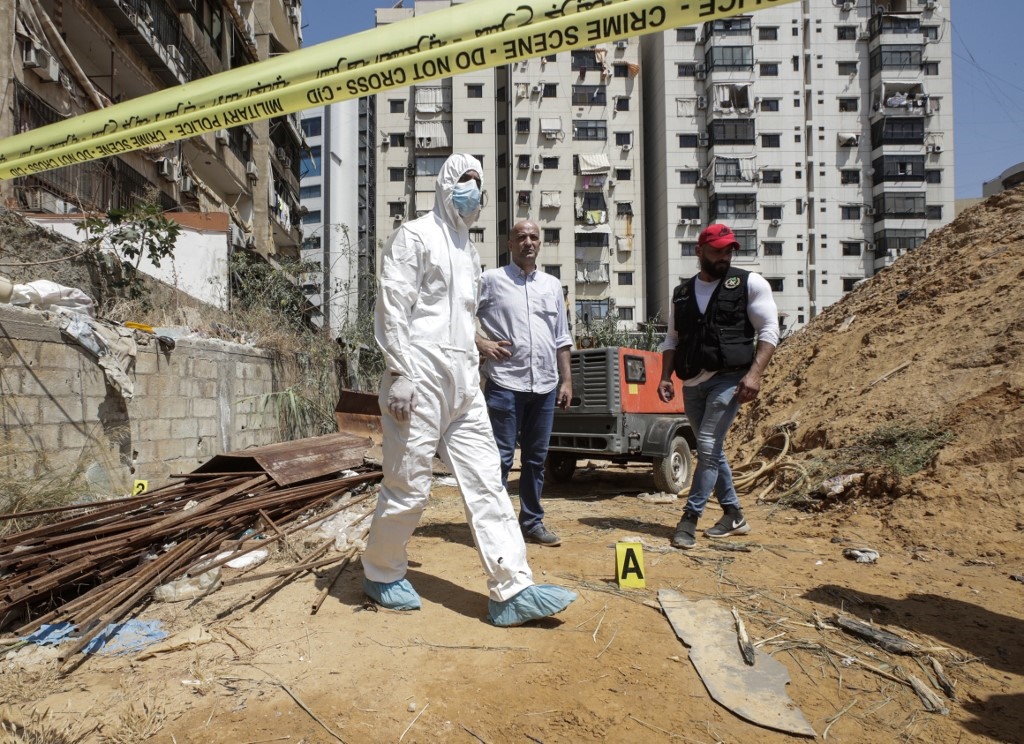 Forensic investigators of Lebanon's military intelligence inspecting the scene where two drones came down in the vicinity of a media centre of the Shiite Hezbollah movement earlier in the day in the south of the capital Beirut on August 25, 2019.
ANWAR AMRO / AFP

Lebanese Shiite group Hezbollah on Sunday said one of two drones that came down over its Beirut stronghold was rigged with explosives and caused damage to its media centre.

"The first drone fell without causing damage while the second one was laden with explosives and exploded causing huge damage to the media centre," Hezbollah spokesman Mohamed Afif said.

The early morning incident came hours after Israel launched air strikes in neighbouring Syria, but Hezbollah officials could not confirm if the drones deployed in Lebanon were Israeli.

"Hezbollah did not shoot down any drone," Afif said, in remarks carried by Lebanon's National News Agency.

"The first drone did not explode and it is now in the possession of Hezbollah which is analysing it," he added.

Another Hezbollah source told AFP the Iran-backed Shiite militant group -- a major political player in Lebanon with representatives in parliament and the government -- has not determined if the drones were Israeli.

Hezbollah head Hassan Nasrallah is due to give a speech later in the day at a pre-scheduled group event.

"Hezbollah will give a staunch response during (Nasrallah's) speech," Afif said.

Lebanon and Israel are technically still at war, and Beirut regularly accuses its neighbour of violating its airspace with planes and drones.

Hezbollah -- considered a terrorist organisation by Israel and the United States -- has fought several conflicts with the Jewish state.

In recent years those hostilities have spilled over into Syria, where Hezbollah -- like Israeli's arch-foe Iran -- is fighting on the side of the regime of Bashar al-Assad.

On Saturday night Israeli jets carried out strikes in Syria to prevent an Iranian force from launching an attack on the Jewish state with drones armed with explosives, Israel's army said.

We live in a world where facts and fiction get blurred
In times of uncertainty you need journalism you can trust. For only R75 per month, you have access to a world of in-depth analyses, investigative journalism, top opinions and a range of features. Journalism strengthens democracy. Invest in the future today.
Subscribe to News24
Related Links
Lebanon newspaper goes black to raise alarm over political crisis
Family of Palestinian boy wounded in head wants answers from Israel
Israeli warplanes hit Gaza after Palestinian rocket attack
Next on News24
WRAP | The US elections 2020

Every day ke payday for Daily Lotto players
Full list of lottery results
Lockdown For
DAYS
HRS
MINS
Voting Booth
When planning for the Black Friday sales do you:
Please select an option Oops! Something went wrong, please try again later.
Save, research and plan ahead, preparing to make the most of it?
7% - 988 votes
Wait and see what looks like a good deal on the day?
14% - 1878 votes
Have no interest in spending more money this year?
79% - 10538 votes
Previous Results
Podcasts
PODCAST | POLITICS UNMUTED: When prophets and politics collide