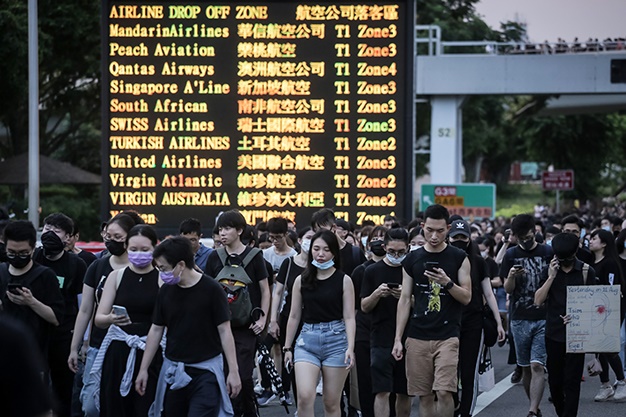 Protesters walk on a highway near Hong Kong's international airport following a protest against the police brutality and the controversial extradition bill on August 12, 2019. - Hong Kong airport authorities cancelled all remaining departing and arriving flights at the major travel hub on August 12, after thousands of protesters entered the arrivals hall to stage a demonstration. (Photo by VIVEK PRAKASH / AFP)

Hong Kong has announced a two-week ban on incoming flights from eight countries and tightened coronavirus restrictions after detecting cases of the Omicron variant.

Carrie Lam, the chief executive of Hong Kong, told reporters on Wednesday that incoming flights from Australia, Canada, France, India, Pakistan, the Philippines, the United Kingdom and the United States, including interchanges, would be banned from January 8 to January 21.

The government will ban indoor dining after 6pm from Friday, she said, and close swimming pools, sports centres, bars and clubs, museums and other venues for at least two weeks.

All cruises have also been cancelled, she said. Earlier on Wednesday, a ship carrying 3 700 passengers and crew was ordered to cut short its "cruise to nowhere" and return to port for mass testing after nine people were traced as close contacts of an Omicron case.

"We're yet to see a fifth wave yet, but we're on the verge," said Lam.

Like mainland China, Hong Kong has pursued a zero-Covid-19 strategy and maintained some of the world's harshest measures throughout the pandemic, including virtually closed borders, weeks-long quarantines, targeted lockdowns and mass testing.

This has kept cases low, with the territory of 7.4 million people reporting just over 12 000 cases and 213 deaths since the pandemic began. But the strict measures have left residents cut off from the rest of the world.

On December 31, a streak of three months without community cases ended with the first local transmission of the Omicron variant.

Since then, authorities have scrambled to track down and test hundreds of people who had been in contact with a handful of Omicron patients.

One patient, however, had no known links, raising fears of a large outbreak.

"We are worried there may be silent transmission chains in the community," Lam said. "Some confirmed cases had a lot of activities before being aware they got infected."

Lam said the government would not suspend classes for the time being "for the benefit of children".

The latest contact tracing campaign was sparked by a patient who danced with some 20 friends in a central park on New Year's Eve. Two of the fellow dancers, one of whom was a domestic helper, came up positive in preliminary tests.

READ | Boycotts, Covid and controversy as Beijing Olympics draw near

The helper's employer and eight of her other close contacts then went on a cruise on January 2.

As part of its coronavirus restrictions, Hong Kong has restricted cruises to short trips in nearby waters, with ships asked to operate at reduced capacity and to only allow vaccinated passengers who test negative for the virus.

The Royal Caribbean's Spectrum of the Seas ship, which returned a day early, had about 2 500 passengers and 1 200 staff on board. The nine close contact passengers were isolated from the rest of the people on board and preliminary tests taken during the journey returned negative results, authorities said.

"Spectrum of the Seas is taking appropriate measures under guidelines by the Department of Health," Royal Caribbean told the Reuters news agency in a statement.

READ | Omicron may be milder because it has a less effective way of attacking lung cells, studies say

The nine close contacts were sent to a quarantine centre, while the rest of the passengers and staff will have to undergo several tests, the government said.

Additionally, people who have been to dozens of places across Hong Kong around the same time as the close contacts of recent patients have been issued compulsory testing notices, the government said in a separate statement.

Here are the Daily Lotto numbers
Full list of lottery results
Voting Booth
Have you and your family been counted in Census 2022?
Please select an option Oops! Something went wrong, please try again later.
Yes
47% - 3214 votes
No
53% - 3573 votes
Previous Results
Podcasts
PODCAST | The Story: How one incident at Stellenbosch University sheds light on deeper issues