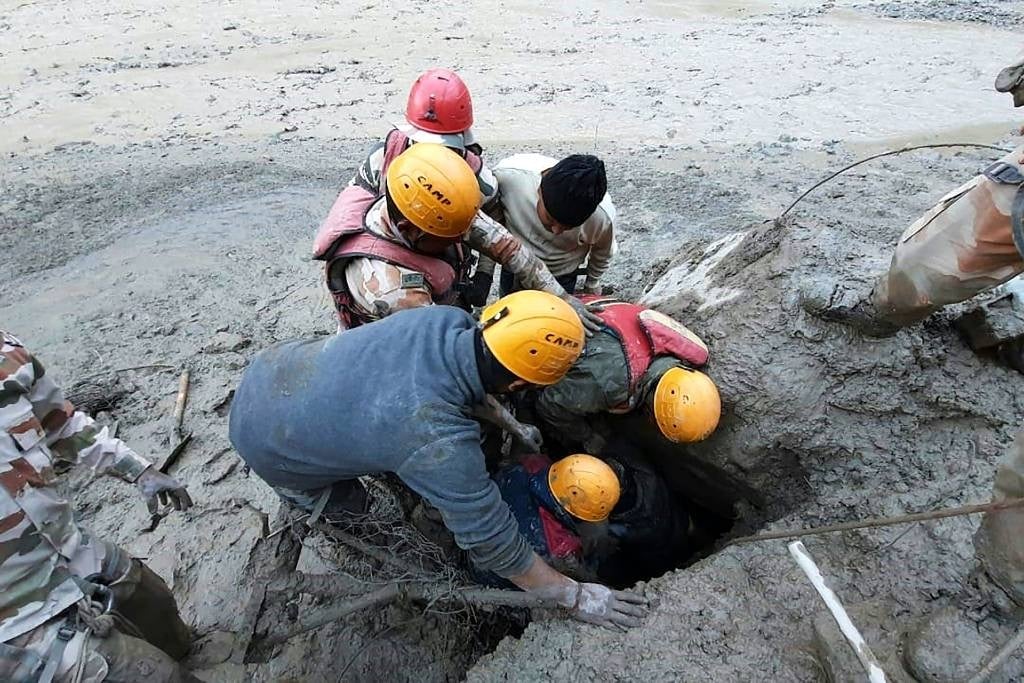 Emergency workers in India on Monday raced against time to dig through mud and rocks choking a Himalayan tunnel after a devastating flash flood - thought to have been caused by a chunk of glacier breaking off - killed at least 26 people.

More than 170 others were listed as missing after a wall of water and debris barrelled down a tight valley in India's north early Sunday, destroying bridges, roads and hitting two hydroelectric power plants.

Uttarakhand Director General of Police Ashok Kumar said late Monday that 26 bodies had been recovered, and 171 people remained unaccounted for.

Most of those missing were workers at the two power plants, with some trapped in a U-shaped 2.7-kilometre tunnel in Tapovan that filled with mud and rocks when the flood hit.

Twelve people were rescued from one side of the tunnel on Sunday but another 34 were still trapped at the other end, the Indo Tibetan Border Police's Banudutt Nair, who is in charge of the rescue operation, told AFP.

The semi-liquid debris was estimated to be around 180 metres deep, but rescuers believed there were air pockets in the tunnel, Nair added.

"Approximately 80 metres inside the tunnel is cleared and accessible," said Vivek Kumar Pandey, another disaster official.

With the main road washed away, paramilitary rescuers had been forced to scale down a hillside on ropes to reach the entrance. Emergency workers were using heavy machinery to remove tonnes of rocks.

Around 1 000 rescuers - including from the military, police and national disaster personnel -aided the search operation on Monday.

"If this incident happened in the evening, after work hours, the situation wouldn't have been this bad as labourers and workers in and around the sites would have been at home," Uttarakhand Chief Minister Trivendra Singh Rawat told reporters.

Giant floodlights lit up one entrance of the tunnel late Monday as a huge excavator slowly worked its way through the sludge, carrying huge piles out and depositing it beside a river so rescuers could carefully search the debris for survivors or remains.

A short distance ahead, workers used an excavator to try to remove giant boulders from the road blocking the way to the second under-construction power plant.

The Rishi Ganga facility was destroyed and turned into a flattened wasteland covered with brown and grey slush, with a nearby concrete bridge that connects to China border swept away by the raging torrent of water.

At least 35 workers and locals are missing from the site.

Scores of social media users captured the disaster, with footage showing water tearing through the narrow valley with terrifying force.

"We were 300 metres inside the tunnel working. Suddenly there was whistling and shouting telling us to get out," said survivor Rajesh Kumar, 28.

"We started running out but the water gushed in. It was like scenes from a Hollywood movie. We thought we wouldn't make it," he told AFP.

Deepak Kumar, whose brother Bharminer was still trapped inside the tunnel, said six workers came from his village in Lakhimpur Kheri in Uttar Pradesh state.

"The moment that we heard that our brother is trapped inside the tunnel, we jumped into the car" and drove around 400 kilometres, Kumar told AFP outside the tunnel.

Authorities said initially the cause was a chunk of glacier breaking off into a river, but the trigger may instead have been a phenomenon called a glacial lake outburst flood (GLOF).

This is when the boundaries of a glacial lake - formed when a glacier retreats - are breached, releasing large amounts of water downstream.

It is possible this was caused by an avalanche. The incident may also have been triggered by water pockets inside a glacier bursting.

Glaciers in the region have been shrinking rapidly in recent years because of global warming, but experts say the construction of hydroelectric plants could also be a factor.

Floods in 2013 killed 6 000 people and led to calls for a review of projects in Uttarakhand, a state of 10 million people bordering Tibet and Nepal.

Vimlendhu Jha, the founder of Swechha, an environmental NGO, said the disaster was a "grim reminder" of the effects of climate change and the "haphazard development of roads, railways and power plants in ecologically sensitive areas".

Glaciers in the region are a critical source of water for hundreds of millions of people.

Do you want to know more about this topic? Sign up for one of News24's 33 newsletters to receive the information you want in your inbox. Special newsletters are available to subscribers.
We live in a world where facts and fiction get blurred
In times of uncertainty you need journalism you can trust. For only R75 per month, you have access to a world of in-depth analyses, investigative journalism, top opinions and a range of features. Journalism strengthens democracy. Invest in the future today.
Subscribe to News24
Related Links
18 dead, 200 missing after Indian glacier disaster
At least 12 dead, 170 missing in wake of India glacier avalanche
Himalayan glacier bursts in India, 100-150 feared dead
Next on News24
'How many dead bodies?' asked Myanmar protester killed on bloodiest day