Understaffed and underfunded clinics stand half-empty in parts of the Chinese countryside even as hospitals in major cities heave under an unprecedented Covid-19 wave - an illustration of the stark disparities in the country's healthcare system.

Visits by AFP journalists in the past two weeks have revealed sharp differences in demand for urban and rural hospitals in parts of northern China as many in the countryside head to big cities for a quality of care they simply can't get closer to home.

In one of the world's most unequal economies, China's centralised healthcare system drives money and resources toward urban hospitals at the expense of rural ones, a disparity that has become all the more intense as cases surge.

In the capital Beijing and the northern megacity of Tianjin, emergency wards have been so overwhelmed that dozens of mostly elderly patients have been accommodated on gurneys in public areas.

Crammed shoulder to shoulder and gasping for breath, many were hooked up to intravenous drips or oxygen tanks while machines monitored their vital signs. A few appeared unconscious or unresponsive.

Yet in the neglected rural town of Xin'an, the sparsely equipped local hospital was operating at well below full capacity. 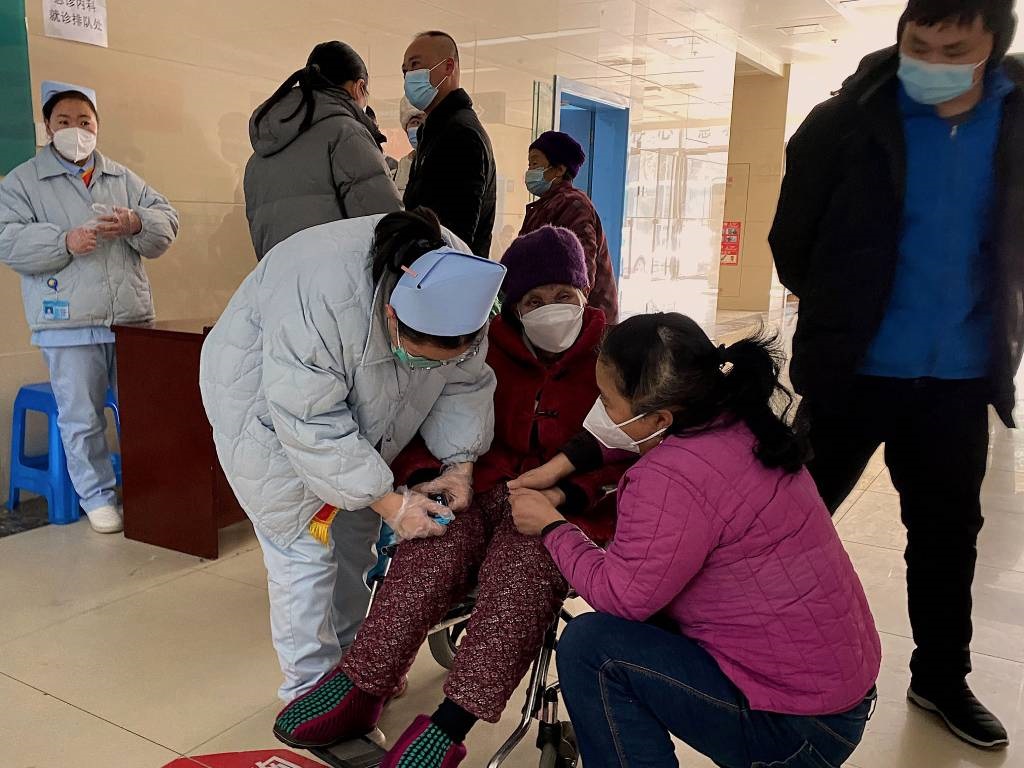 In a poorly heated room near reception, around half a dozen elderly people huddled in thick overcoats, drips protruding from their arms.

But most of the seats were unoccupied, and the pressure on staff appeared far lower than their municipal counterparts.

"What we are seeing in rural China epitomises the lack of progress in China's healthcare reform," said Yanzhong Huang, senior fellow for global health at the Council of Foreign Relations, a nonpartisan US think tank.

People dissatisfied with the poor quality of rural healthcare will bypass (local providers) to seek care in urban hospitals.

As the initial wave starts to ebb, the pressure on some facilities may be receding - even as the seriously sick continue to flock to municipal institutions.

Many rural residents, meanwhile, struggle for nearby access to doctors and medicines, and public health literacy is often patchy.

A local shopkeeper in Xin'an said a Covid outbreak had swept through the settlement of around 30 000 people in December, but "the worst of it has passed".

And hospital staff and local residents there said those requiring treatment for severe illness usually made the 90-minute journey up the highway to Tianjin or pushed on to Baoding, a city some 200km away where a recent outbreak overwhelmed hospitals.

Medical services in mid-size municipalities also appear to be less stretched than in China's megacities.

In Tangshan - a smaller industrial city of 7.7 million people - the scene was calmer than that in Tianjin about two hours away.

Around two dozen patients of advanced age filled the resuscitation ward of a central hospital, with one nurse saying they had "all tested positive" for Covid-19.

Only three or four patients occupied makeshift beds in the corridors outside.

Chinese authorities have said in recent days that the first wave of infections has hit a peak in cities including Beijing and Tianjin.

But the end is far from near, with officials warning of a multi-pronged outbreak in the coming weeks as city workers return to their rural hometowns during the winter travel season.

"To some extent, rural patients may have put extra strains on urban healthcare institutes," said Xi Chen, an associate professor at the Yale School of Public Health.

"However, unlike in urban areas, this wave of the Omicron outbreak has not reached its peak in rural China," he added.

"Things may get significantly worse as migrants start to return to rural communities."