Look at terror attacks in US, Europe, and their perpetrators 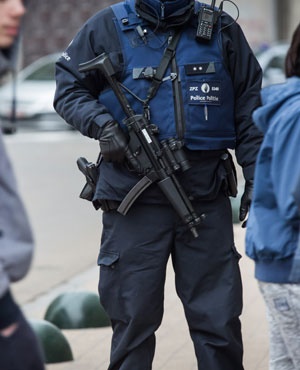 Post-9/11 strikes on US soil have been perpetrated overwhelmingly by people who've been radicalised in America. But some of the deadliest attacks in Europe have been carried out by asylum seekers or people posing as refugees, which the US president says he is trying to prevent in America.

The New America think tank says jihadists have killed 94 people inside the US since 9/11, with attacks escalating in the past two years.

A look at some of the most serious incidents in the US in the past 16 years, and deadly attacks in Europe:

December 2001: British national Richard Reid unsuccessfully tries to detonate explosives packed into his shoes on an American Airlines flight from Paris to Miami. Reid had reportedly travelled to Pakistan and Afghanistan and trained with al-Qaeda.

July 2008: Naveed Afzal Haq, a US citizen of Pakistani descent, shoots six women at Seattle's Jewish Federation offices, killing one. Haq told authorities he was angered by the war in Iraq and US military cooperation with Israel.

June 2009: Abdulhakim Mujahid Muhammad, a US citizen, shoots dead one US soldier and wounds another at a military recruiting station in Little Rock, Arkansas. He had travelled to Yemen, where he reportedly trained with al-Qaeda-linked militants.

November 2009: US citizen Maj. Nidal Malik Hasan, a US Army Medical Corps psychiatrist, kills 13 people at a military base in Fort Hood, Texas. Hasan launched the attack three weeks before he was due to deploy to Afghanistan. He had previously sent emails to a radical US-born Islamic cleric, Anwar al-Awlaki, who was killed by a drone strike in Yemen in 2011.

December 2009: Umar Farouk Abdulmutallab, a Nigerian recruit to al-Qaeda's Yemen branch, tries unsuccessfully to blow up a Detroit-bound airliner on Christmas Day with explosives in his underwear. Authorities say he trained under al-Awlaki.

May 2010: Faisal Shahzad, a Pakistan-born US citizen, ignites a bomb he'd placed in a vehicle parked in New York's Times Square. It fails to explode. Shahzad had reportedly trained with militants in Pakistan.

April 2013: Tamerlan and Dhozkar Tsarnaev, US citizens born in Kyrgyzstan, set off two bombs at the 2013 Boston marathon, killing three and injuring over 260 people. The ethnic Chechen brothers appear to have self-radicalised long after coming to the US a decade earlier. Authorities say Tamerlan, the older brother, became radicalised in the last few years of his life, including during a six-month trip to Dagestan and Chechnya in 2012.

October 2014: US citizen Zale Thompson attacks police officers with a hatchet in Queens, New York, seriously injuring one. Police said there was some evidence Thompson was influenced by extremist Muslim rhetoric on the internet. But he also had contact with a black activist about fighting racism at home.

July 2015: Kuwait-born US citizen Muhammad Youssef Abdulazeez opens fire at a recruiting center and another US military site a few miles apart in Chattanooga, Tennessee, killing four Marines and a sailor. Investigators said Abdulazeez was a homegrown violent extremist but his motive remains unclear. Relatives said he had a history of mental illness.

December 2015: Syed Farook, a US citizen of Pakistani descent, and his wife, Tashfeen Malik, a Pakistani permanent US resident, kill 14 people and injured 22 at an office party in San Bernardino, California. The FBI concluded they were "homegrown violent extremists."

June 2016: Omar Mateen, a US citizen born to Afghan parents, opens fire at a gay nightclub in Orlando, Florida, killing 49 and seriously injuring 53 — the deadliest jihadist attack in America since 9/11. Authorities said Mateen had read and absorbed extremist propaganda on the internet. He pledged allegiance to IS leader Abu Bakr al-Baghdadi in a call from the nightclub during the attack.

September 2016: Ahmad Khan Rahami, an Afghanistan-born US citizen, sets off bombs in New York and New Jersey, injuring 31 people. There are signs he was radicalised abroad by Islamic extremists, though any ties to IS are tenuous.

November 2016: Abdul Razak Ali Artan, a Somali refugee with permanent US residency, carries out a car and knife attack on fellow students at Ohio State University campus, injuring 11 people. Artan had spent seven years in a refugee camp in Pakistan before moving to America in 2014. He ranted in social media about US interference in Muslim lands.

July 2005: Four Al-Qaeda-inspired bombers blow themselves up on three subway trains and a bus in London, killing 52. Three of the bombers are British-born, all of Pakistani descent; the other emigrated from Jamaica.

January 2015: Two Paris-born brothers of Algerian descent storm the office of satirical newspaper Charlie Hebdo in January 2015, shooting a dozen people dead. Two days later, a friend of the brothers, born in France and from a Malian immigrant, kills four Jews at a kosher supermarket.

November 2015: Islamic State-linked extremists attack the Bataclan concert hall and other sites across Paris, killing 130 people. The attackers are believed to have included French, Belgians and Iraqis who entered Europe by posing as refugees.

March 2016: Suicide attackers kill 32 and injure hundreds at the Brussels airport and subway. The perpetrators were closely linked to the group that carried out the attacks in Paris. They included four Belgians of Moroccan descent and a Swede from a family that emigrated from Syria.

July 2016: A Tunisian living in France drives a truck into Bastille Day revelers in the southern French city of Nice, killing 86 people. IS claims responsibility.

December 2016: A Tunisian asylum seeker drives a truck into a Christmas market in Berlin killing 12 people. IS claims responsibility.

We live in a world where facts and fiction get blurred
In times of uncertainty you need journalism you can trust. For only R75 per month, you have access to a world of in-depth analyses, investigative journalism, top opinions and a range of features. Journalism strengthens democracy. Invest in the future today.
Subscribe to News24
Related Links
Trump draft order seeks review on terror interrogations
Trump staff, properties face terror risk with presidency
Istanbul police detain 8 suspects over nightclub attack
Next on News24
WRAP | The US elections 2020

R500k for one Daily Lotto player!
Full list of lottery results
Lockdown For
DAYS
HRS
MINS
Voting Booth
When planning for the Black Friday sales do you:
Please select an option Oops! Something went wrong, please try again later.
Save, research and plan ahead, preparing to make the most of it?
8% - 945 votes
Wait and see what looks like a good deal on the day?
14% - 1784 votes
Have no interest in spending more money this year?
78% - 9814 votes
Previous Results
Podcasts
PODCAST | POLITICS UNMUTED: When prophets and politics collide