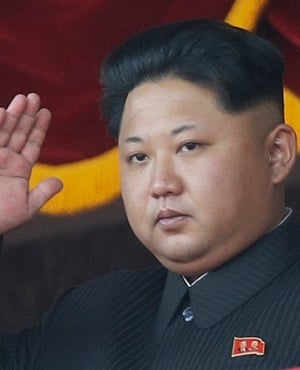 Seoul – North Korean leader Kim Jong Un looked on Monday to milk his country's recent nuclear test as a propaganda victory, praising his scientists and vowing more nuclear bombs a day after the US flew a powerful nuclear-capable warplane close to the North in a show of force.

A standoff between the rival Koreas has deepened since last week's test, the North's fourth. Seoul on Monday continued anti-Pyongyang propaganda broadcasts across the border and announced that it will further limit the entry of South Koreans to a jointly run factory park in North Korea.

Outside North Korea, Kim faces widespread condemnation and threats of heavy sanctions over the North's disputed claim of a hydrogen bomb test. Internally, however, Kim's massive propaganda apparatus has looked to link the test to Kim's leadership so as to glorify him and portray the test as necessary to combat a US-led attempt to topple the North's authoritarian system.

On Monday, Kim took photos with nuclear scientists and technicians involved in the test and praised them for "having glorified" his two predecessors, his late father, Kim Jong Il, and his grandfather, state founder Kim Il Sung, according to the state-run Korean Central news Agency.

Kim earlier called the explosion "a self-defensive step" meant to protect the region "from the danger of nuclear war caused by the US-led imperialists," a separate KCNA dispatch said.

The comments provide insight into North Korea's long-running argument that it is the presence of tens of thousands of US troops in South Korea and Japan and a "hostile" US policy that justify its pursuit of nuclear weapons and long-range missiles.

On Sunday, a US B-52 bomber flew low over areas near Seoul, the South Korean capital city only about an hour's drive from the border with the North, a fly-over that North Korea will see as a threat. The B-52 was joined by South Korean F-15 and US F-16 fighters and returned to its base in Guam after the flight, the US military said.

White House chief of staff Denis McDonough said the B-52 flight was intended to underscore to South Korean allies "the deep and enduring alliance that we have with them." Interviewed on CNN, McDonough said the United States would work with South Korea, Japan, China and Russia "to deeply isolate the North Koreans" and "squeeze" them until they live up to prior commitments to get rid of their nuclear weapons.

World powers are looking for ways to punish the North over its disputed bomb test, which, even if not of a hydrogen bomb, still likely pushes Pyongyang closer to its goal of a nuclear-armed missile that can reach the US mainland. Many outside governments and experts question whether the blast was in fact a powerful hydrogen test.

In the wake of the test on Wednesday, the two Koreas have settled into the kind of Cold War-era standoff that has defined their relationship over the past seven decades. Since Friday, South Korea has been blasting anti-Pyongyang propaganda from huge speakers along the border, and the North is using speakers of its own to send messages, although Seoul says they are too weak to be heard clearly on the South Korean side.

A top North Korean ruling party official's warning that the South's broadcasts have pushed the Korean Peninsula "toward the brink of war" is typical of Pyongyang's over-the-top rhetoric. But it is also indicative of the real fury that the broadcasts, which criticise the country's revered dictatorship, cause in the North.

While the South's broadcasts also include news and pop music, much of the programming challenges North Korea's government more directly.

The South Korean measures on Monday on the jointly run factory park in the North will take effect on Tuesday. They seek to limit the daily number of South Korean nationals at the complex to about 650, from the current 800, according to Seoul's Unification Ministry.

The park, the last major remaining symbol of inter-Korean cooperation, is considered a rare legitimate source of hard currency for the impoverished North.

Last week, South Korea began barring those with no direct relations to the park's operations, such as clients and potential buyers.

Responding to the North's bomb test, US Secretary of State John Kerry has urged China, the North's only major ally and biggest aid provider, to end "business as usual" with North Korea.

Diplomats at a UN Security Council emergency session pledged to swiftly pursue new sanctions. For current sanctions and any new penalties to work, better cooperation and stronger implementation from China is seen as key.

It may take weeks or longer to confirm or refute the North's claim that it successfully tested a hydrogen bomb, which would mark a major and unanticipated advance for its still-limited nuclear arsenal.

We live in a world where facts and fiction get blurred
In times of uncertainty you need journalism you can trust. For only R75 per month, you have access to a world of in-depth analyses, investigative journalism, top opinions and a range of features. Journalism strengthens democracy. Invest in the future today.
Subscribe to News24
Related Links
US bomber flies over South Korea as show of force against North
Kim visits military as Koreas slide into Cold War standoff
Koreas slide into Cold War standoff after nuke test by North
Next on News24
Race against the clock to build Trump's border wall