PICS | US elections: Protests flare up as vote counting drags on Protestors and members of Anonymous march near the White House during the Million Mask March.
Al Drago/Getty Images

A second day of sometimes dueling demonstrations over the integrity of the US presidential election started early on Thursday in Philadelphia and other cities as ballot counting dragged on in a handful of states that will decide the outcome.

Supporters of Joe Biden have rallied around the slogan to "count every vote," believing a complete tally would show the Democratic former vice president had beaten Republican President Donald Trump. Ardent Trump backers have countered with cries to "protect the vote" in support of his campaign's efforts to have some categories of ballots, including some votes submitted by mail, discarded.

Both factions appeared outside a vote-counting center in Philadelphia on Thursday morning, where election staff steadily worked through a mountain of still-uncounted mail-in ballots that will determine whether Biden or Trump will take Pennsylvania's crucial 20 Electoral College votes. 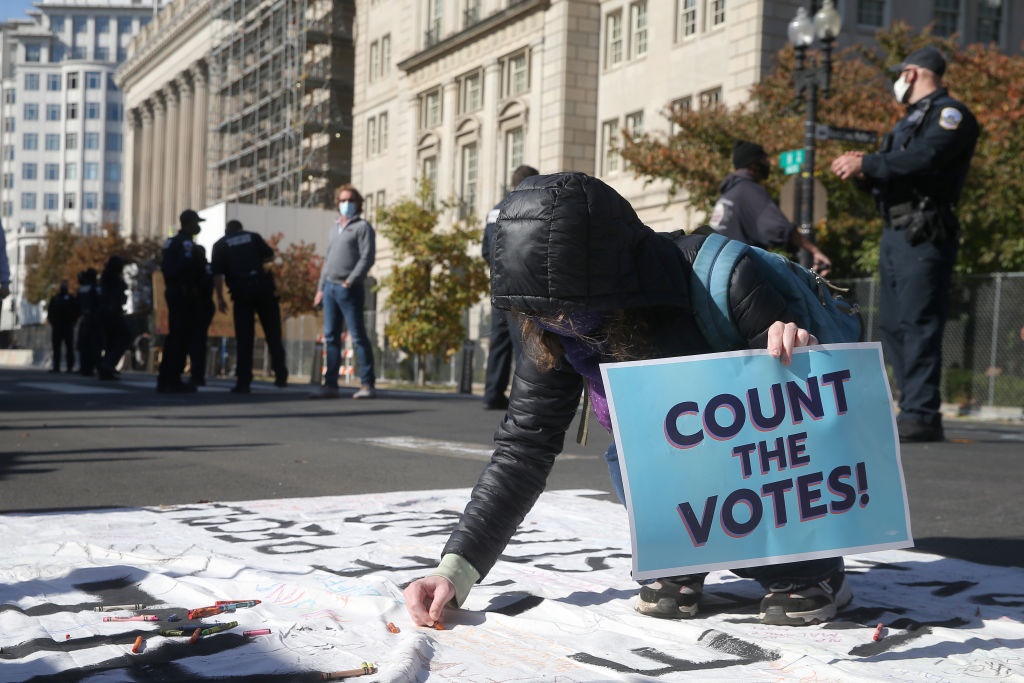 A group of Trump supporters held Trump-Pence flags and signs saying: "Vote stops on Election Day" and "Sorry, polls are closed." Across the street were Biden supporters, who danced to music behind a barricade. Similar rallies were planned later in the day in Harrisburg, Pennsylvania's capital.

"We can't allow the ballot counters to be intimidated," said Bob Posuney, a 70-year-old Biden-supporting retired social worker with a "count every vote" T-shirt, speaking as the sounds of Marvin Gaye's song "What's Going On" filled the air.

A group calling itself Bikers for Trump rallied outside the Philadelphia convention center.

"I think voter fraud is systemic," said Chris Cox, one of the bikers. Multiple studies have concluded that illegitimate ballots are vanishingly rare in the United States.

Although counting was already completed in Michigan, which news outlets projected Biden had won, a few dozen Trump supporters waved flags and signs outside a Detroit counting center. At one point, a Black Trump supporter got into a yelling match with a Black Democrat over Trump's record on Black issues as police looked on. Protestors and members of Anonymous march near the White House during the Million Mask March.
Getty Images l Drago/Getty Images

Elizabeth Fohey, a 74-year-old retired dental hygienist from Troy, Michigan, said she was skeptical that election officials were counting all conservative votes. She complained that Republican poll challengers were not allowed into a Detroit counting center, which is untrue.

"My message is to have the vote done correctly," she said, dressed in a U.S.-flag-themed windbreaker. "I'm working for my country, to keep my country free and safe." 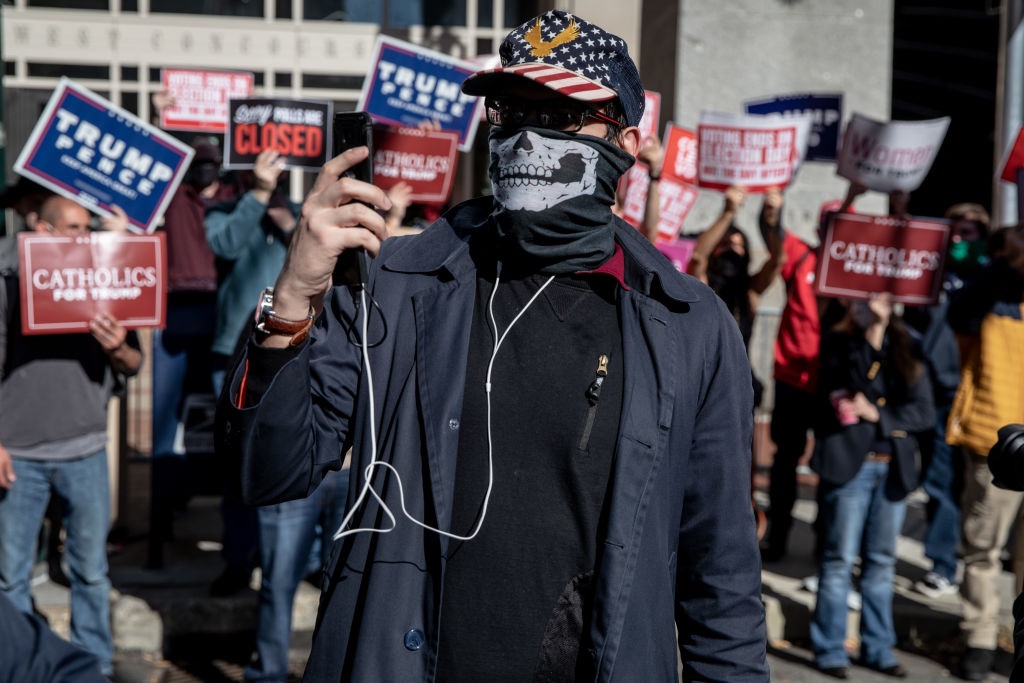 In Wisconsin, Bobbie Dunlap, an information technology worker who lives in Genoa City, complained that she voted in person for Trump on Election Day but her vote still not been marked as processed on Wisconsin's website, though counting remains underway in the state.

"We are organizing a peaceful march on the capital to ask for a full audit of the election here in Wisconsin," she said. Trump's campaign has called for a recount in the state.

In Washington, a procession of cars and bicycles, sponsored by activists from a group called Shutdown DC, paraded slowly through the streets of the capital to protest "an attack on the democratic process" by Trump and his "enablers," according to its website.

Most demonstrations in cities around the country have been peaceful and small — sometimes amounting only to a few dozen people with signs standing in a city center — as Biden's path to victory looks a bit more assured than Trump's, even though either outcome remains possible.

On Wednesday, a few demonstrations led to clashes with police. The demonstrations were triggered in part by Trump's comments following Tuesday's Election Day in which he demanded that vote counting stop and made unsubstantiated, conspiratorial claims about voter fraud. A police officer stands in front of supporters of US president Donald Trump during a protest outside the Philadelphia Convention center as votes continue to be counted.
Getty Images Chris McGrath/Getty Images

Police in New York City, Denver, Minneapolis and Portland, Oregon, all reported they had arrested some protesters, often on charges of blocking traffic or similar misdemeanors.

Some Republican and Democratic ballot-counting watchers took notes as officials sorted each batch of 400 ballots one by one, ensuring signatures matched between envelopes and ballots.

The counting in Atlanta was far calmer than in Phoenix where a crowd of Trump supporters, some armed with rifles and handguns, gathered outside a counting center on Wednesday after unsubstantiated rumors that Trump votes were deliberately not being counted.

We live in a world where facts and fiction get blurred
In times of uncertainty you need journalism you can trust. For only R75 per month, you have access to a world of in-depth analyses, investigative journalism, top opinions and a range of features. Journalism strengthens democracy. Invest in the future today.
Subscribe to News24
Related Links
WATCH | Timelapse of sunrise over the White House as tense ballot counting continues
Gareth Cliff on Instagram flagging his US election post: 'I have no respect for fact-checkers'
Iran's supreme leader Ayatollah Ali Khamenei mocks US democracy
Next on News24
WRAP | The US elections 2020