Madrid - Spanish police say an autopsy will be held on the badly decomposed body of a seven-year-old boy that was found in the house of his American parents in the northeastern city of Girona.

A police spokesperson said the autopsy would be carried out later on Thursday but the results would not be made public.

She said the parents were arrested on suspicion of reckless homicide and would be brought before a city court on Friday.

The couple, whose names were not released, was arrested on Tuesday at the apartment where they lived with their three children.

Police say they don't know where in the United States the family came from or how long they had been living in Spain.

We live in a world where facts and fiction get blurred
In times of uncertainty you need journalism you can trust. For only R75 per month, you have access to a world of in-depth analyses, investigative journalism, top opinions and a range of features. Journalism strengthens democracy. Invest in the future today.
Subscribe to News24
Related Links
Couple arrested in Spain after body of child found
'Dead toddler was lying there like a person sleeping quietly'
Toddler dies after 8-storey plunge
Next on News24
Britain expects "very significant" week for Brexit talks as clock ticks down 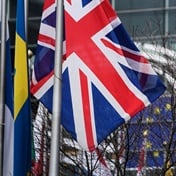