The Taliban said on Sunday that their militants have entered multiple districts in the Afghan capital Kabul, while sources said they had also taken over the presidential palace, hours after leader Ashraf Ghani fled the country.

There was no confirmation from the Afghan government about the Taliban's claim. Government officials were not immediately contactable, Reuters reported.

The Taliban were earlier on the brink of total victory in Afghanistan , with their fighters ordered to wait on the outskirts of the capital and the government conceding it was preparing for a "transfer of power".

The Taliban's militants surrounded Kabul following an astonishingly quick rout of government forces, who proved incapable of holding onto territory without US military support.

The fall of Kabul will see the hardline Islamic group take back power two decades after US-led forces toppled it in the wake of the 11 September 2001 attacks.

"The Islamic Emirate instructs all its forces to stand at the gates of Kabul, not to try to enter the city," a spokesperson for the Taliban tweeted earlier as residents reported insurgents on the outskirts of the city.

"Until the completion of the transition process, the responsibility for the security of Kabul is with the other side (the Afghan government)". The Taliban is advancing in seizing complete control of Afghanistan.
Xinhua/Saifurhaman Safi via Getty Images

President Ashraf Ghani - who most expect to resign in days, if not hours - conceded as much, and in a video message released to media urged what remains of his security forces to maintain law and order.

There are fears of a security vacuum in the capital as thousands of police and other armed services members have abandoned their posts, uniforms and even weapons.

"It is our responsibility and we will do it in the best possible manner," Ghani said, hours after the Taliban seized two nearby prisons and released thousands of inmates.

The government signalled earlier there were negotiations underway to avoid bloodshed in Kabul, and to hand power to the Taliban.

The Afghan people should not worry... there will be no attack on the city and there will be a peaceful transfer of power to the transitional government.

A Taliban spokesperson in Qatar later said the group wanted to take control imminently, as he ought to reassure foreigners about the type of government the militants would lead.

"In next few days, we want a peaceful transfer," Suhail Shaheen, based in Qatar as part of the group's negotiating team, told the BBC.

The Taliban's imminent takeover triggered fear and panic in Kabul among residents fearful of the group's hardline brand of Islam.

President Joe Biden also ordered the deployment of an additional 1 000 US troops to help secure the emergency evacuation from Kabul of embassy employees and thousands of Afghans who worked for American forces and now fear Taliban reprisals.

That was on top of the 3 000 American soldiers deployed in recent days, and 1 000 left in-country after Biden announced in May that the final withdrawal of the US military presence in Afghanistan would be completed by 11 September. Afghan security forces patrol in the Afghan capital of Kabul city, Afghanistan, on August 15, 2021. In a statement, the Taliban said they do not intend to enter Kabul by force or war, but to negotiate with the other side to enter peacefully. (Photo by Haroon Sabawoon/Anadolu Agency via Getty Images)

That decision has come under increased scrutiny given the collapse of the Afghan armed forces, but he insisted Saturday there was no choice.

"I was the fourth president to preside over an American troop presence in Afghanistan - two Republicans, two Democrats. I would not, and will not, pass this war onto a fifth," Biden said.

The scale and speed of the insurgents' advance have shocked Afghans and the US-led alliance that poured billions into the country over the past two decades.

Ghani's government was left completely isolated on Sunday after the insurgents overran the anti-Taliban northern stronghold of Mazar-i-Sharif and the eastern city of Jalalabad.

Like with most of the other captured cities, the seizure of power came after government forces surrendered or retreated. 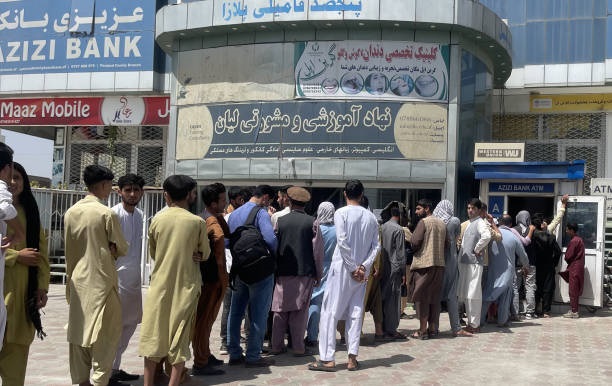 Afghan people line up outside AZIZI Bank to take out cash as the Bank suffers amid money crises in Kabul, Afghanistan, on August 15, 2021. In a statement, the Taliban said they do not intend to enter Kabul "by force or war, but to negotiate with the other side to enter peacefully." (Photo by Haroon Sabawoon/Anadolu Agency via Getty Images)

Most of the fighters appeared young, suggesting they were most likely infants or unborn when the Taliban was toppled from power in 2001.

As the Taliban closed in on the capital, panicked residents swarmed banks for a second straight day, hoping to withdraw their savings.

Many were already resigned to the Taliban taking power.

My only wish is that their return leads to peace. That is all we want.

There were also signs people were already resigned to changing their lives to accommodate the resurgent regime.

A worker was seen Sunday whitewashing advertising billboards on a beauty parlour featuring a glamorous bride.

For the tens of thousands who have sought refuge in Kabul in recent weeks, the overwhelming mood was one of apprehension and fear.

One doctor who arrived in the capital with his 35-strong family from Kunduz said he planned to return today.

"I am worried there will be a lot of fighting here. I would rather return home, where I know it has stopped," he told AFP, asking not to be named.