‘They are so young’: Corpses pile up in Mykolaiv morgue 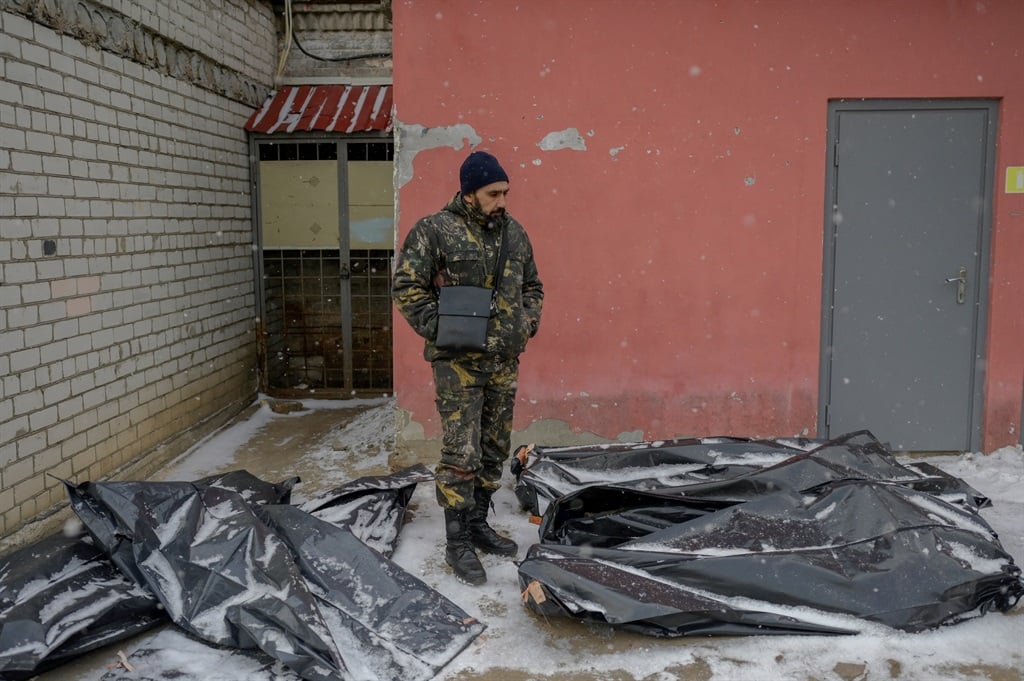 A man stands over corpses outside a morgue in Mykolaiv.
BULENT KILIC / AFP

The corpse lies with its hands clasped, as if in prayer.

In fact, says the morgue employee, he was throwing Molotov cocktails when the Russians caught him. They tied his hands and executed him.

Such are the chilling images from the morgue in Mykolaiv, a city on the shores of the Black Sea that has been under Russian attack for days.

Outside, in the courtyard of the forensic institute where the morgue is located, the snow is constantly falling on corpses wrapped in grey plastic body bags, waiting to be evacuated.

In the dilapidated building, bodies are placed on the floor for lack of space. The insidious smell of death, mixed with disinfectant, is everywhere.

Doctors perform autopsies in questionable hygienic conditions. Naked bodies lie in the way of the cold store, where the fatalities from a bombardment a few days earlier in nearby Ochakiv are piled up.

Vladimir, a morgue employee who gave only his first name, lights cigarette after cigarette.

"I've never seen such a thing. We thought the worst thing that could happen to us here was car accidents," he says, shaking his head.

Crossing the courtyard again, Vladimir opens a door onto a nightmarish spectacle.

About 30 corpses are placed on the ground. Two soldiers in fatigues, one disembowelled, are stacked on top of each other. There appear to be civilians, too.

They are so young, younger than my nephew.

At the back of the room, there is also a Russian soldier. Two men carry a corpse in a body bag to lay it next to others in a snow covered yard in Mykolaiv, a city on the shores of the Black Sea that has been under Russian attack for days on March 11, 2022. Mykolaiv and its region have seen heavy fighting, but the Ukrainians are resisting and retook the local airport a few days ago. As the last major town before the great port city of Odessa, it is a vital strategic position.
AFP BULENT KILIC / AFP

"We keep them separated."

Mykolaiv and its region have seen heavy fighting, but the Ukrainians are resisting and retook the local airport a few days ago.

As the last main town before the major port city of Odesa, it is a vital strategic position.

"Since the beginning of the war, we have received 120 bodies, including 80 soldiers and 30 civilians," says the director of the forensic institute, Olga Dierugina, wearing a woollen vest over her medical coat and a pom-pom hat on her head to keep off the cold.

Among the civilian victims, the youngest was a three-year-old child and the oldest in their seventies, she adds with an exhausted look.

Some bodies are difficult to identify, especially among the 19 that arrived from Ochakiv two days ago. DNA samples are taken, experts note tattoos and jewellery.

The bodies of the soldiers are repatriated to their region of origin. "They are all very young, born in 1990, in 2000," says Dierugina.

There is silence when asked how she feels. Then her face suddenly sags: "Fear. We all have children."

Trying not to break down, she wipes away tears.

Here in Mykolaiv, it’s still fine, but my parents are in Chernihiv [in the north], they can’t evacuate.

Fifteen of her colleagues have fled west, but there are about 60 personnel still working at the forensic hospital, including 20 in the morgue.

"I can never thank them enough," says Dierugina.

The situation is still under control in Mykolaiv, she adds, but "we are heading straight for a humanitarian disaster if this continues".

Outside the morgue, several families wait in silence under the falling snow.