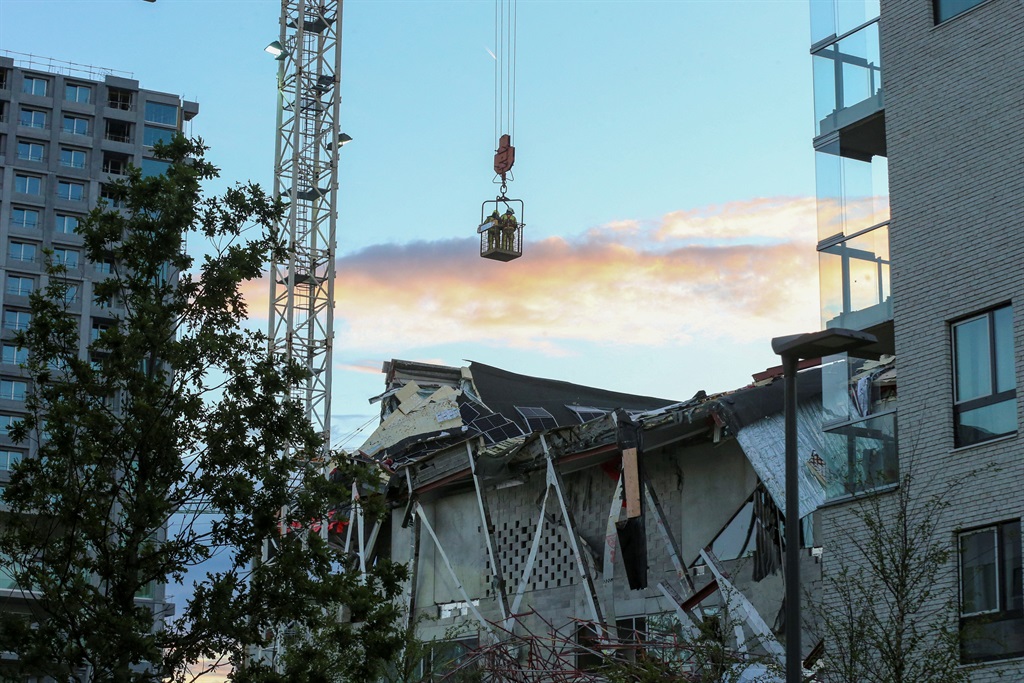 Rescuers inspect the rubble on 18 June 2021 at the site where a building that was under construction collapsed in the Jos Smolderenstraat in Antwerp's Nieuw Zuid district, leaving at least one victim and 20 injured people.
Nicolas Maeterlinck / AFP

Three construction workers were confirmed dead and two still missing on Saturday, a day after a school construction site partially collapsed in the Belgian city of Antwerp.

The city's fire department tweeted that three bodies had been found under the rubble.

"Despite this terrible toll, the rescue work continues unabated until we are also able to free the two remaining missing persons," it said.

Two of the dead were from Portugal and Romania, police told local media.

The nationality of the third dead worker was not clear. Rescuers had said when three people were still missing that they were looking for two more Portuguese and one Russian.

Nine others were injured in the incident on Friday afternoon. The school was still under construction so no students were present.

The cause of the collapse was not known.

King Philippe of Belgium was expected to visit the scene on Saturday.

Did you know you can comment on this article? Subscribe to News24 and add your voice to the conversation.
We live in a world where facts and fiction get blurred
In times of uncertainty you need journalism you can trust. For only R75 per month, you have access to a world of in-depth analyses, investigative journalism, top opinions and a range of features. Journalism strengthens democracy. Invest in the future today.
Subscribe to News24
Next on News24
Greece suffering worst heatwave for three decades - PM

Perfect start to the month for 1 Daily Lotto player!
Full list of lottery results
Lockdown For
DAYS
HRS
MINS
Voting Booth
Should Covid-19 vaccinations be mandatory for employees in workplaces?
Please select an option Oops! Something went wrong, please try again later.
Yes, it is the responsible thing to do
47% - 5110 votes
No, vaccination should be an individual choice
43% - 4704 votes
No, but those who are unvaccinated should have to work from home
11% - 1155 votes
Previous Results
Podcasts
PODCAST | The Story: Surviving Covid-19 and unrest: - will our economy ever recover?