A US teen disqualified after winning a swim meet over a school-approved bathing suit that bared too much of her buttocks has been reinstated following an uproar.

Organisers stripped the high school swimmer of victory in one of four races in Alaska last Friday because of a "uniform violation".

The referee who made the decision argued it was justified as she could see "butt cheek touching butt cheek".

The ruling outraged a local coach who challenged the decision in a blog post that accused the referee of singling out the 17-year-old student because of her race and for being curvy and full-figured.

"These young swimmers aren't being punished for wearing their suits in scandalous or provocative ways, but rather, because their ample hips, full chests, and dark complexions look different than their willowy, thin, and mostly pallid teammates," Lauren Langford wrote in her post.

She said the student stripped of victory was wearing the same suit issued to every girl on the team and yet she was the only athlete sanctioned.

"The incident... comes after more than a year of tensions over the fit of suits worn by athletes at youth swim meets in the state of Alaska," Langford wrote.

Outrage over the decision prompted the Anchorage School District to overturn the disqualification on Tuesday following a review that found the ruling "was heavy-handed an unnecessary".

In a statement, the district said the swimmer was "targeted based solely on how a standard, school-issued uniform happened to fit the shape of her body".

Related Links
US teen to get high school, Harvard diplomas in 1 month
Teen wins battle in US 'toilet wars'
US judge sides with transgender teen, declines to dismiss suit
Share
Next on News24
UK has 100 000 modern slaves but most go undetected, study says 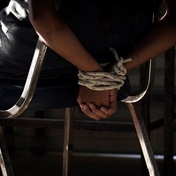 Here are your Lotto and Lotto Plus results
Full list of lottery results
Lockdown For
DAYS
HRS
MINS
Voting Booth
A few positive Covid-19 cases have been confirmed at two SA rugby franchises.. Should teams proceed with return to training protocols?
Please select an option Oops! Something went wrong, please try again later.
Yes, SA rugby is already behind the eight ball compared to New Zealand and Australia
14% - 184 votes
It’s too dangerous, the country is only now heading into the Covid-19 storm!
41% - 557 votes
Get the ball rolling, Covid-19 is here to stay as the 'new normal'
45% - 614 votes
Previous Results
Podcasts
PODCAST | THE STORY: What next for Gauteng as it overtakes Western Cape as SA's Covid-19 hotspot