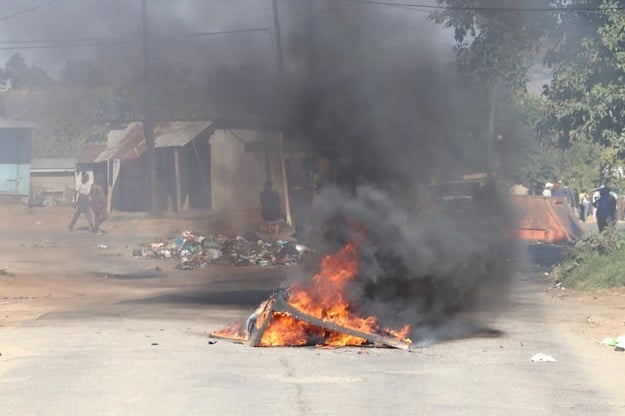 A barricade in the road that is on fire is seen in Mbabane, Eswatini, amid protests.
AFP

Police shot a man dead during clashes with a group of commuter bus operators protesting for political reform in the small kingdom of Eswatini on Wednesday, an AFP correspondent witnessed.

It was latest protest in Africa's last absolute monarchy, formerly known as Swaziland, where school students have been boycotting classes and staging low-key demonstrations for the past month, prompting the deployment of soldiers and police.

The clashes on Wednesday occurred in the small town of Malkerns, 20 kilometres west of the country's largest city Manzini, the police said.

A man was shot at Malkerns after a group of protesters stopped a truck carrying sand and used it to block (a) road.

"Officers came with guns and tried to reason with them, but they retaliated by throwing stones at them and that is when one of them was shot dead," he told reporters.

The private commuter bus operators had pulled their vehicles off the roads to demonstrate.

The protests across Eswatini have mainly been calling for the release of two lawmakers arrested during pro-democracy protests earlier this year.

At least 27 people died as police clashed with protesters in some of the worst unrest in the southern African country's history.