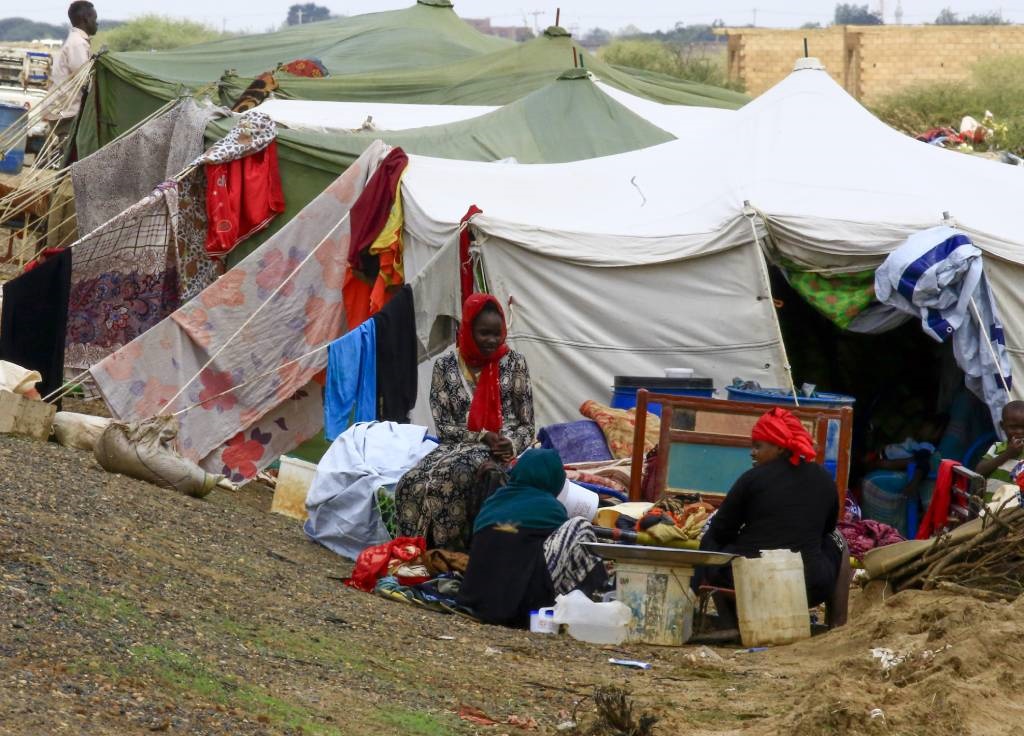 Sudanese, displaced due to floods and torrential rains, are pictured outside their temporary shelters on the side of a road in the town of Osaylat.
Ashraf Shazly, AFP

On Sudan's Tuti Island, where the Blue and White Nile meet, the highest river waters since records began have left people struggling to hold back the rising floods.

Wedged between the twin cities of Khartoum and Omdurman, people on Tuti fill bags with sand and small stones in an often futile bid to stop the lapping water from swamping their homes.

The world's longest river is life-giving, but the Nile also brings misfortune and misery to many.

"Three days ago the water invaded my house around midnight," said Swakin Ahmad, dressed in a red headscarf.

"We were knee-deep in it. My husband and I, with our five children, fled... carrying a few things in our hands."

Every year during the rainy season the river floods, and the people of the island expect the waters to rise.

But nothing in the past compares to the floods of today, residents say.

"In previous years, we would leave our house for two months to live with friends," Ahmad said.

"But this year that was impossible, because water had entered their homes too."

Civil defence officials say that seasonal floods have killed 94 people, injured 46 and destroyed or damaged over 60 000 homes across Sudan during the current season.

The level of the Blue Nile has risen to 17.57m, the ministry of water and irrigation said this week, breaking all records since measurements began more than a century ago.

But many fear the worst is yet to come.

Heavy rains are forecast to continue through September, both in Sudan and upstream in neighbouring Ethiopia, the source of the Blue Nile.

"Young people tried to rescue things from my house," Ahmad said. "But it was hopeless, because they had water up to their necks and could not see anything."

Residents have thrown up makeshift barrages in the path of the water, but their efforts have been engulfed by the rising river.

Iqbal Mohamed Abbas, who welcomed many of those forced from their homes at her educational centre, described "the courage with which young people tried with simple means to slow down the flood".

She recalled previous occasions when the island was flooded, remembering a tune her grandparents sang decades ago.

"I am proud of these young people who came to try to stop the Nile with their bodies," Abbas said, reciting the lyrics.

But this time it appears much worse.

Sudan's water ministry predicts that this year's flood is larger than that of 1998, which destroyed tens of thousands of homes in several states and displaced more than a million people.

The United Nations Office for the Coordination of Humanitarian Affairs (OCHA) estimates that more than 380 000 people have already been affected across the country.

The floods come despite the controversial construction upstream of a 145m tall hydroelectric dam across the Blue Nile, and the vast reservoir behind that Ethiopia has begun filling.

Both Sudan and Egypt view the mega dam as a threat to their water supplies, but heavy rainfall in the Ethiopian highlands has eased fears of water shortages in the short term.

But some experts, such as the US-based research and campaign group International Rivers, have warned that changing weather patterns due to climate change could result in irregular episodes of flooding and drought in the Blue Nile's drainage basin.

For the people of Tuti, the reason behind the record floods matters little - it is the loss of their homes that is the tragedy.

"I had to convince them to leave their homes - it was heart-breaking," Sharaf said. "There was nothing to be done, the water was pouring in everywhere."

People's homes were washed away.

"I told them it is possible to rebuild your homes, but we wouldn't be able to revive souls that fly away upon drowning," Sharaf said.

As residents piled up more sand bags, the army arrived to help.

For Sudan, where military dictator Omar al-Bashir was toppled last year, the appearance of soldiers bringing in aid seems like a change from the past.

"I saw their eyes red from a lack of sleep," said Hisham Kamal, an army general, who led a convoy of 90 trucks carrying food, and sand to stop the waters.

We live in a world where facts and fiction get blurred
In times of uncertainty you need journalism you can trust. For only R75 per month, you have access to a world of in-depth analyses, investigative journalism, top opinions and a range of features. Journalism strengthens democracy. Invest in the future today.
Subscribe to News24
Related Links
US suspends aid to Ethiopia over Blue Nile dam dispute
Pope calls for dialogue between Egypt, Ethiopia and Sudan over Nile dam
Sudan rains and floods claim 20 more lives
Next on News24
Central African Republic constitutional court confirms Touadera re-election