'Nigeria will deal with this': High alert after coronavirus case

Health authorities in Nigeria are ramping up efforts to detect and contain the new coronavirus after Africa's most populous country confirmed its first case, calling on citizens to avoid panicking or spreading unverified information about the disease.

An Italian citizen working in Nigeria tested positive for the virus on Thursday after falling ill following his arrival in the commercial hub of Lagos from Milan in northern Italy, an area that has emerged as Europe's coronavirus hotspot.

The man, who has since been isolated at a hospital in Yaba, is "clinically stable" and has not developed serious symptoms, according to health officials.

"We have already started working to identify all the contacts of the patient since he entered Nigeria," Osagie Ehanire, Nigeria's health minister, told reporters in the capital, Abuja. "We have continued to beef our own security. The level of preparedness continues to improve of Nigeria every day."

Public health professionals who spoke to Al Jazeera expressed confidence in the West African country's ability to contain the spread of the virus. They pointed to key lessons from its successful response to an Ebola outbreak more than five years ago, as well as a series of measures already put in place before the arrival of the coronavirus.

Along with heightening screening at points of entry, particularly at airports, authorities have established testing capacity in four laboratories and expanded surveillance to follow up with travellers from countries affected by the infectious disease - officially known as COVID-19 - within 14 days of arriving in Nigeria. 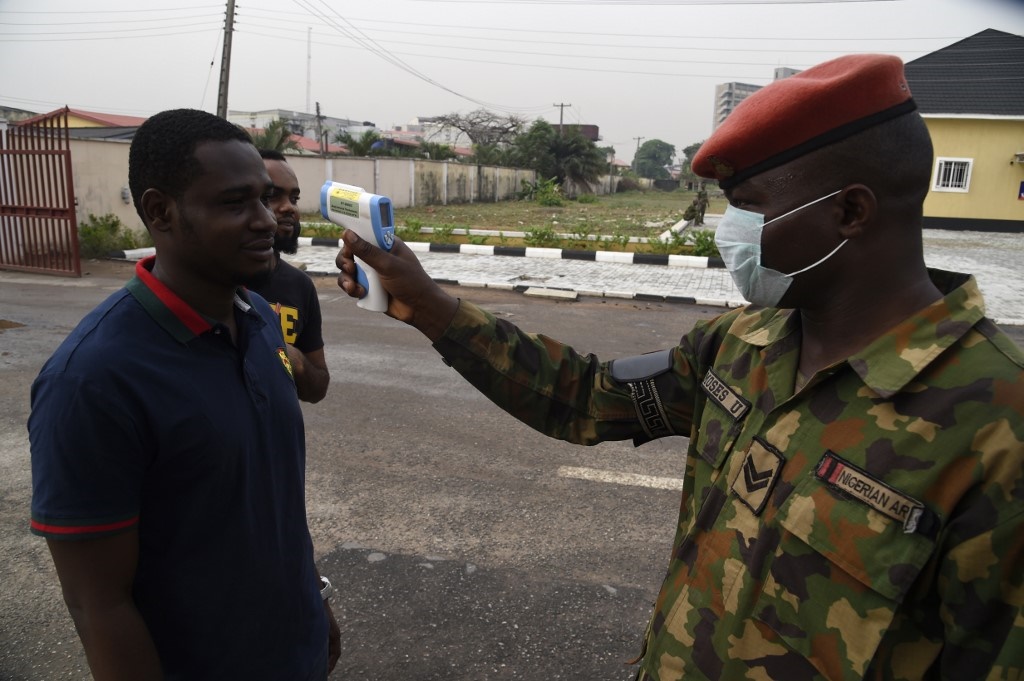 A soldier checks the body temperature of a visitor to the 68 Nigerian Army Reference Hospital at Yaba in Lagos. (Pius Utomi Ekpei / AFP)

The Nigeria Centre for Disease Control (NCDC) has also supported the activation of emergency operation centres to serve as coordination platforms, while its Coronavirus Preparedness Group meets daily to review the situation and manage the response efforts.

The agency has meanwhile issued a public health advisory to inform Nigerians about symptoms and preventive measures, and has provided a toll-free number for guidance.

May Ubeku, a public health practitioner and epidemiologist, said Nigerian health authorities were "fully prepared" to contain the spread of the coronavirus, citing the series of measures introduced since January.

Nigeria is sub-Saharan Africa's first country to register a case of the virus, which has killed some 2,900 people and infected more than 86,000 worldwide, the vast majority in China where it originated late last year.

Medical experts had long expected the arrival of the deadly virus in sub-Saharan Africa, pointing to the deep trade and travel ties between China and a number of countries on the continent.

Parts of West Africa already share a painful experience of trying to tackle the major Ebola outbreak that ravaged the region between 2013 and 2016 and killed more than 11,000 people.

In Nigeria, the first case of Ebola was detected in July 2014 following the arrival of an infected Liberian man at the Lagos international airport. The man, who died in hospital, set off a chain of transmission that killed seven people out of a total of 19 infections. But months later, the country was declared Ebola-free, with the World Health Organization (WHO) hailing a "spectacular success story" and commending authorities for their "effective coordination of the response".

'Nigeria will deal with it'

Ifeanyi Nsofor, who graduated from Atlantic Fellows for Health Equity programme at George Washington University in 2019, cited Nigeria's experience in stamping out Ebola, as well as polio, as promising signs in the fight to contain the spread of the new coronavirus.

In August last year, Nigeria went three years without a case of wild poliovirus and is due to receive a wild polio-free status in June 2020 - a gigantic shift from 2012 when it accounted for more than half of all polio cases worldwide. "The structures are still in place," Nsofor said, adding that Nigeria can count on the "massive" network of health workers who were deployed to tackle polio and Ebola.

"Nigeria will deal with this [coronavirus]."

Still, Nsofor, CEO of EpiAFRIC, an Abuja-based public health consultancy, expressed concern that much of the coronavirus containment effort seems to be concentrated on airports in big cities.

"Our weakest link is our land borders, [which] are porous," he explained, urging health authorities to intensify surveillance.

The confirmation of the first case of COVID-19 comes at a time when Nigeria is still battling an outbreak of Lassa fever, which has caused 118 deaths since the beginning of the year.

Lassa fever is endemic in Nigeria and some parts of West Africa and is predominantly transmitted via food or household items contaminated by rodent urine or faeces.

Ukam Edadi, founder and director of Lagos-based Citizens Health Initiative Nigeria, a group campaigning for citizens' right to accessible and quality healthcare, called for continuous training of the health workforce involved in tackling epidemics alongside an "aggressive and intensive health education on respiratory hygiene in the media, schools, hospitals, churches and mosques" to prevent the spread of COVID-19. A soldier checks the body temperature of a visitor to the 68 Nigerian Army Reference Hospital at Yaba in Lagos. (Pius Utomi Ekpei / AFP)

Meanwhile, the arrival of coronavirus in Lagos, an overcrowded megacity of some 20 million people, has sparked fears among residents amid reports of people scrambling to buy hygiene products. On Saturday, two locals told Al Jazeera that they visited pharmacies and stores but did not find any protective masks and hand sanitisers to buy.

"People are scared, people are panicking but the most important thing that people will do is to get appropriate and credible information" from credible organisations and authorities such as the NCDC, the health ministry and the WHO, explained Nsofor.

Health officials and public health professionals have also expressed concerns that online platforms could trigger the rise of myths and misinformation about the disease.

"Citizens must not abuse social media and indulge in spreading misinformation that causes fear and panic," Nigeria's health ministry said in a statement earlier this week.

We live in a world where facts and fiction get blurred
In times of uncertainty you need journalism you can trust. For only R75 per month, you have access to a world of in-depth analyses, investigative journalism, top opinions and a range of features. Journalism strengthens democracy. Invest in the future today.
Subscribe to News24
Related Links
Covid19: SA citizens in Wuhan heading back home - how ready is SA?
Coronavirus: 121 in SA tested thus far and still no cases, assures Mkhize
Nigeria relocates Italian coronavirus patient for better health care
Next on News24
eSwatini youth stage rare rural protest against monarchy