A satellite image obtained shows a view of northwestern Ethiopia that focuses on the status of the Grand Ethiopian Renaissance Dam and the Blue Nile River.
Handout / Satellite image ©2020 Maxar Technologies

In a statement, Ethiopian Prime Minister Abiy Ahmed said the GERD should serve as a model of regional integration.

"While perceived negative factors have been made more visible in the GERD discourse, the positive attributes rather outweigh the opposing rhetoric and downplay the potential for cooperation to mitigate negative factors if such factors exist.

"It is time for our three countries of Ethiopia, Egypt and Sudan to nurture the narrative towards building peace, cooperation, mutual co-existence and development of all our people without harming one another," he said.

However, Ahmed did not address Egypt's main concerns. Last year Egypt threatened military action to destroy the project because, during the duration of filling the GERD's reservoir with water, which takes between five  and 12 years, it would decrease Egypt's share of the Nile River.

This meant farming would be affected as thousands of jobs would be lost as Egypt slides into food insecurity. Ahmed argued that the project would help Sudan alleviate its water crisis and improve its hydroelectricity generation, while Egypt would benefit from water conservation.

"In Sudan for example, the GERD provides ample protection against devastating floods and the effects of water shortage during drought and dry periods. It will help Sudanese water infrastructure to be operated optimally as they receive regular flow."

"Egypt also benefits from water conservation at the GERD instead of wastage of billions of cubic meters of water to evaporation and in downstream flood plains," he said. 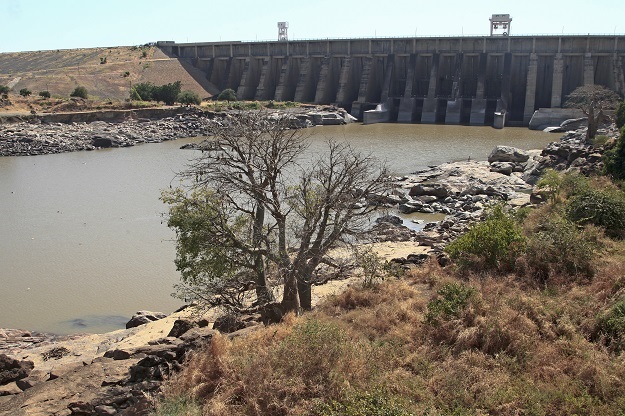 A picture shows a view of the Roseires Dam on the Blue Nile river at al-Damazin in southeastern Sudan. The Roseires hydropower complex is located 105 kilometres east of the Grand Ethiopian Renaissance Dam.
AFP Ebrahim HAMID / AFP

The project, according to the prime minister, would see Ethiopia creating a modern economy based on agriculture, manufacturing and industry. The dam will also result in over 60 million people having access to electricity.

"Electricity is a basic infrastructure lacking in Ethiopia and over 53% of my fellow citizens or about 60 million people do not have access. With no electricity, no country has ever managed to defeat poverty," he said.

The GERD, which was now 80% complete 11 years after construction started, sits on the Blue Nile River, one of the three main tributaries to the Nile River along with the White Nile and the Atbara.

The Nile River, the longest in Africa, runs through Egypt and or along the border of Burundi, Tanzania, Rwanda, the Democratic Republic of the Congo, Kenya, Uganda, Sudan, Ethiopia, and South Sudan.