After six campaigns and years spent as a political outsider, Hakainde Hichilema was sworn in as Zambia’s president on Tuesday.

Wearing a mask and white gloves, Hichilema was sworn in as the country’s seventh president since independence. He took the oath of office at Heroes Stadium in the capital Lusaka, in front of an invitation-only audience. The crowd was limited due to Covid-19 regulations.

The 59-year-old, who won a landslide victory by about a million votes - unseating the incumbent Edgar Lungu - thanked Zambians for putting their "trust in a simple village boy".

Mutale Nalumango, Zambia’s second woman vice president, was sworn in alongside him. The first, Inonga Wina, served with Lungu.

As a brass band played the national anthem and various hymns, thousands watched from home. In between the live broadcasts, Zambia’s state television ran advertisements by various companies – from ceramics to forestry — congratulating Hichilema and Nalumango and promising to work with the new administration to build the country.

In the stadium, one corner of the grandstand was awash in red, the official colours of Hichilema’s United Party for National Development.

President Cyril Ramaphosa was among the heads of state attending the ceremony, along with Democratic Republic of Congo Presient Felix Tshisekedi and Zimbabwe’s Emmerson Mnangagwa.

The crowd roared as Lungu handed over the symbolic instruments of power to his former rival. 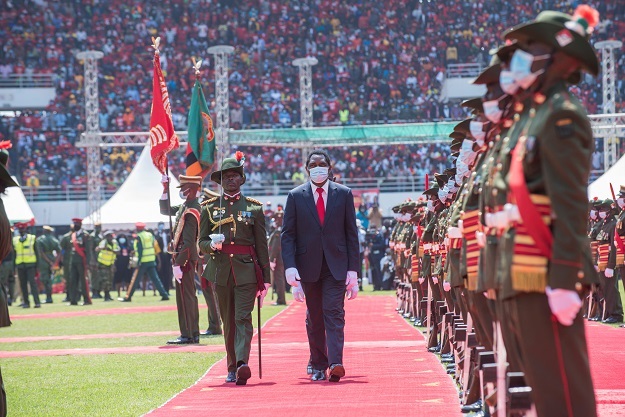 As Lungu conceded defeat last week, the two leaders met in a casual photo opportunity, with both men smiling. It was a far cry from the animosity that has characterised their relationship.

"We choose not to call it 'transfer of power' because power belongs to the people," Hichilema said in his inaugural speech.

"We must put aside our election-related and other differences and pull in on direction as a country," he added.

A focus on the economy

Much of Hichilema’s first address as president focused on the country’s economy, a consistent message he carried throughout his campaign. “Going forward, you will see rationality, prudence and effectiveness from our side,” he said. it was perhaps a veiled dig at his predecessor, whose economic policies were criticised for over-spending on large but ultimately frustrating infrastructure projects.

Hichilema promised to restore "macro-economic stability", by bringing down national debt and restoring investor confidence. The businessman-turned-politician outlined what he described as an "ambitious economic and social transformation agenda" that would see the country reach middle-income status.

Drawing on his own experience as a businessman who became one of Zambia’s wealthiest men, he promised to diversify the economy and encourage entrepreneurship and innovation in a country that has been criticised for its over-reliance on natural resources.

Hichilema’s mention of unity, good governance and foreign policy all returned to development and creating opportunities, ultimately foregrounding the economy. He also focused on the importance of a free press in a democratic country, after an election campaign that deepened the partisanship of Zambia’s media.