According to the state-owned Herald newspaper, Grace said this in her first public statement since she left South Africa following allegations that she assaulted a young model at a Johannesburg hotel.

Grace told journalists while touring various stands, including the Adult Rape Clinic, at the just ended Zimbabwe Agricultural Show in Harare on Friday that there was need to inculcate a culture of respect for women among young men. 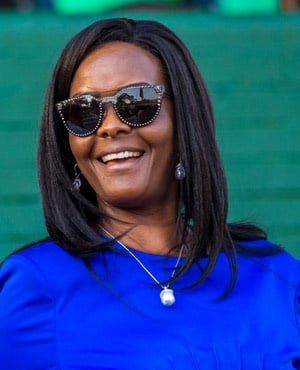 'Some say I'm a witch... but how many did I kill?,' Mugabe asks as he dismisses VP poisoning claims

Harare – President Robert Mugabe has reportedly dismissed claims that Vice President Emmerson Mnangagwa was bewitched after he suffered what was believed to be food poisoning early this month.

Mnangagwa was flown to South Africa for emergency medical care two weeks ago after he started vomiting and had severe diarrhoea.

The deputy president, who was seen as a favourite to succeed Mugabe, fell ill at a rally where the president was speaking on August 12.

According to The Standard, some Zanu-PF bigwigs alleged that Mnangagwa ate poisoned ice-cream from the first family's Gushungo Holdings. Motsoaledi lashes out at 'Africa's health tourist' leaders, among them Buhari, Mugabe

According to NewsDay, Motsoaledi made the remarks during his address at the ongoing World Health Organisation (WHO) regional conference in Victoria Falls, Zimbabwe.

Motsoaledi said Africa was the only continent where the leaders travelled abroad for health reasons.

Nairobi - Kenya's opposition says the country's electoral commission has declined to give it access to its servers even after an order to do so from the Supreme Court.

The leader of the opposition coalition, Raila Odinga, is challenging the re-election this month of President Uhuru Kenyatta, arguing that 54% of the vote he received is fraudulent.

Odinga's spokesperson Dennis Onyango said on Tuesday that its information technology experts had been denied "read only" access to the electoral commission servers and to the equipment that transmitted the results from polling centres to tallying stations.

Kigali - Residents in Rwanda's capital say seven people have been killed by crocodiles on the banks of Nyabarongo River this month.

Donata Mukanyana, a mother of six children, said her husband was taken last week by a crocodile while trying to draw water from Nyabarongo River in Kigali's Nyarugenge district.

Amid a prolonged dry spell, residents from Nyarugenge and Kamonyi districts are increasingly depending on Nyabarongo waters for domestic use. Nairobi - Kenya's electoral commission has declined to give the opposition access to its computer servers even after the Supreme Court ordered it to do so, the opposition said on Tuesday as it continues to challenge the results of this month's presidential vote.

Opposition coalition leader Raila Odinga has claimed that President Uhuru Kenyatta's win with 54% of the vote was fraudulent.

Odinga has claimed that hackers infiltrated the electoral commission's servers and manipulated results in Kenyatta's favor.

We live in a world where facts and fiction get blurred
In times of uncertainty you need journalism you can trust. For only R75 per month, you have access to a world of in-depth analyses, investigative journalism, top opinions and a range of features. Journalism strengthens democracy. Invest in the future today.
Subscribe to News24
Related Links
'Respect women,' Grace Mugabe says in first public statement after SA assault saga
Motsoaledi lashes out at 'Africa's health tourist' leaders, among them Buhari, Mugabe
'Some say I'm a witch... but how many did I kill?,' Mugabe asks as he dismisses VP poisoning claims
Next on News24
Mbeki: Kaunda 'was the kind of African leader we need’

3 scoop the Daily Lotto jackpot
Full list of lottery results
Lockdown For
DAYS
HRS
MINS
Voting Booth
When and why would you have your or your partner's sperm count checked?
Please select an option Oops! Something went wrong, please try again later.
That's an unnecessary procedure
17% - 868 votes
As soon as we decide to start a family
7% - 387 votes
Only if we're struggling to conceive
76% - 3973 votes
Previous Results
Podcasts
News24's 'Exodus' series awarded best global podcast of the year