Just how powerful is Grace Mugabe?

Cape Town - So Grace Mugabe, who is  accused of assault in South Africa, is back home in Zimbabwe after she was granted diplomatic immunity by the Department of International Relations and Cooperation (Dirco) over the weekend.

Grace was in the media the whole of last week after she allegedly assaulted a South African model, Gabriella Engels, using an extension cord while her bodyguards looked on. This was after she allegedly found Gabriella with one of her sons, Bellarmine Chatunga at a hotel in the leafy suburb of Sandton.

Grace was granted diplomatic immunity despite calls by a South African legal group, Afriforum, and protesters for her not to be allowed to leave the country.

Harare – Tourism Minister Walter Mzembi has reportedly called on the media to help him market the country to the international community, as Zimbabwe continues to have a tainted image due to its history of "bad governance".

According to New Zimbabwe.com, Mzembi said this last week while speaking to editors in Harare on his "Brand Zimbabwe" initiative.

Mzembi said that the media in the country should help him rebuild the southern African country's image globally through publicising that there was no "dictatorship in the country".

Freetown - It has been a week since mudslides buried large areas of Sierra Leone's capital, Freetown, and hundreds of people are still missing.

The number of confirmed deaths is soon expected to exceed 500 as recovery efforts continue in the West African nation.

Pretoria - Influential women from across Africa converged for a conference in Pretoria last week, as they called for greater land ownership rights.

The conference, hosted by the Habitat for Humanity’s Solid Ground Campaign in association with the Urban CSO Cluster of the Global Land Tool Network (GLTN) of UN-Habitat, focused on land governance and management in Africa.

In a statement, Tamzin Hudson, advocacy specialist for Habitat for Humanity International, said that the event was an opportunity for all those who were involved in land issues to meet in one place to talk about their challenges

Geneva - Unicef is reporting a four-fold increase in use of children as "human bombs" by the radical Boko Haram group in northeastern Nigeria already this year compared to all of 2016.

Unicef spokesperson Marixie Mercado says she has no explanation for the increase to 83 such "human bomb" children, two-thirds of them girls, compared to 19 total children last year.

She said Boko Haram does not always claim responsibility for such attacks typically against civilian targets, but no other groups are known to use the tactic.

Lagos - Nigerian President Muhammadu Buhari will work from home after rodents damaged his official office during a more than 100-day overseas medical absence, a presidential spokesperson told AFP on Tuesday.

The animals damaged furniture and air conditioning fittings in the president's official Abuja office while he was in London receiving treatment, his media adviser Garba Shehu confirmed.

"These are also general works and it is not uncommon for Nigerian presidents to also work from the presidential villa. He has used the residential office for many years," said Shehu. 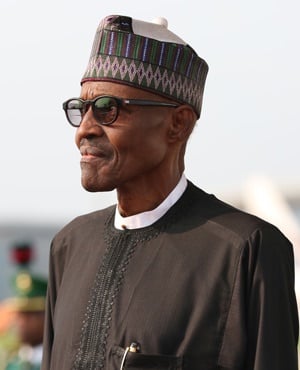