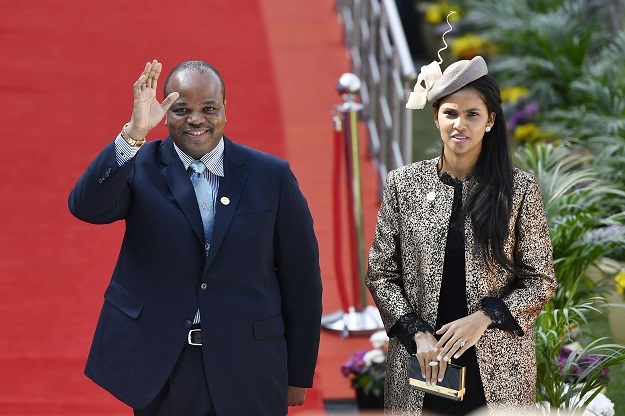 King Mswati III and his wife pictured during the inauguration of SA President Cyril Ramaphosa in 2019.
Gallo Images/Lefty Shivambu

The kingdom of eSwatini saw waves of protests and looting overnight, attributed to a campaign targeting King Mswati III amid calls for his removal.

Protesters looted trucks carting goods from South Africa, blocked roads with burning barricades and set supermarkets on fire, according to witnesses and images circulated via social media and WhatsApp groups.

A night of heavy protests continued into the daytime. In images shared from the scenes, protesters set fire to a statue outside a conference centre in Manzini. In Mbabane, groups of a few dozen protesters marched down a road in the commercial business district, where some shops remained closed.

n a statement, the People United Democratic Movement accused the government of using military forces to crack down on civilians. The group claimed at least five people were critically injured, and a dozen were arrested.

The eSwatini acting Prime Minister Themba Masuku is set to hold a press conference on Tuesday.

Reports of the king fleeing

Demonstrators and political parties claimed King Mswati III and members of the royal family fled to South Africa amid protests.

"The reports about [the] King fleeing are completely untrue and fake. His majesty is in the country," government spokesperson Sabelo Dlaimini told News24.

Protest leaders, dubbed the Kungahlwa Kwenile campaign, called on citizens to burn property and businesses associated with the king. The campaign, whose leaders sought to remain anonymous, published their messages via social media and the Swaziland News, a newspaper critical of the government and published from South Africa.

"As we launch the 'Kungahlwa Kwenile' campaign we want the whole country to be on fire starting from Tuesday. People must target King Mswati's properties and businesses like Montigny forests, Game Reserves, properties of MPs who don't corporate [sic] and government properties among others. All roads must be blocked across the country on Tuesday night," the campaign said.

The protests were in response to a government decree banning citizens from demonstrating and delivering petitions to government officials. In the past weeks, students and youth groups had marched to various state authorities, demanding police reform and democratic freedoms.

Last week, protests spread to rural parts of the country, demanding multi-party democracy in regions traditionally loyal to the king. Police responded with stun grenades, with reports that live ammunition was also fired.

"Government fittingly pointed out that the petition delivery gatherings were degenerating into disorder and becoming epicentres of violence," the national commissioner of police said in a statement, adding that police were "geared up and fully committed" to enforce order.

Observers said this statement was interpreted as a "war cry", further fuelling anger.

The Kungahlwa Kwenile campaign said Tuesday's protests were the first "phase" of demonstrations, adding "this is just a warning that will run for two weeks". If the eSwatini government does not begin negotiations with citizens, the campaign will target schools next.

"eSwatini is burning. There is growing protests action with calls for reform," said Bheki Makhubu, editor of The Nation newspaper in eSwatini. "The disparaging reference to the king is quite unprecedented. I don't know where this is going but riots seem to be growing."