The illegal wildlife trade is one of the highest value illicit trade sectors globally, threatening both human well-being and biodiversity. A prominent example is ivory poaching, leading to an estimated 30% decline in African elephant populations between 2007 and 2014 and costing African states an estimated US$25 million annually in lost tourism revenues.

Rangers are the foundation of action to combat poaching, a job that is incredibly challenging. A recent survey of 7 100 rangers across 28 countries showed 50% lack access to clean water, 34% contracted malaria in the preceding year, only 18% are able to live with their families, and 81% believe their jobs are dangerous.

Globally and daily, hundreds of thousands of wildlife rangers patrol wide areas, encountering all manner of plants, animals and signs of poaching like bushmeat snares or elephant carcasses. The data rangers collect, and their intimate knowledge of the protected areas they patrol, constitute a treasure trove of valuable information that can guide the management of biodiversity.

In our recently published analysis, we collaborated with scientists from the Zimbabwe Parks and Wildlife Management Authority to predict hotspots of elephant poaching in the Zambezi Valley. The real champions, however, were the rangers who both collected the data on which our analysis was based and helped us build our statistical models.

Three rangers working in the Zambezi Valley, Zimbabwe. Our work shows that rangers are far more than the people who take on poachers at the frontline of conservation; they are also ecologists with a deep understanding of the areas they patrol. (Timothy Kuiper, used with permission of each ranger)

The experience underscored for us that statistical models and the knowledge of on-the-ground practitioners are valuable and complementary sources of evidence for biodiversity conservation. Each one alone tells only part of the story.

Our study area, Chewore Safari Area, is part of the Mana-Sapi-Chewore World Heritage Site in Zimbabwe. Between 2000 and 2017, rangers recorded 201 dead poached elephants in Chewore. We wanted to see whether poaching hotspots existed and if so, which areas of the park were most vulnerable.

To answer this question, you can’t just look at where elephant carcasses are found because not every carcass is detected. Carcasses can only be found, by definition, where rangers have patrolled, which might depend on how difficult the terrain is. We corrected the data set of ranger observations to take these biasing factors into account.

Our main finding was that poaching was most likely near permanent water sources, where elephants could predictably be found by poachers. As one ranger said: Poachers don’t go where there are no animals. Elephants don’t move very far from water.

It’s perhaps unsurprising that poaching is most likely where target species are most abundant. Similar results have been found for elephant poaching in Tanzania and large animal poaching in Uganda.

By targeting sites of high elephant abundance, poachers are able to maximise success while minimising the time and resources spent in the park, thus reducing the chances of being found by rangers.

Most other spatial predictors (like tree cover and distance to community land) had only weak predictive power. This suggests that poaching is somewhat random across space, making it difficult to know where poachers might target next.

Our results help reveal how poachers operate, and may guide future patrols to deter them. Our predictions are all the more interesting because rangers in our study area already do routinely patrol near waterholes. Yet the data still show that poachers routinely kill elephants in such areas. This may reflect low manpower: rangers can’t be everywhere all the time. Knowing which exact waterhole poachers might target next is a bit of a gamble.

Over and above these immediate results, we believe that the real value of our research lies in what it has taught us about the deep knowledge which rangers have of their areas, the wildlife within them, and how poachers work.

We used various statistical bias-correction methods to try and tease apart real poaching patterns from those driven by ranger patrol bias. This is where engaging rangers as participatory modellers was crucial.

Before building our models, we individually interviewed several rangers and protected area managers to help us better understand the behaviour of three key agents: poachers, elephants, and the rangers themselves. This helped us select sensible variables to include in our models (like distance to water or to the community lands), and appropriate bias-correction methods.

But the various methods we tested produced model scenarios with quite different results: how were we to know which ones were closest to the truth? 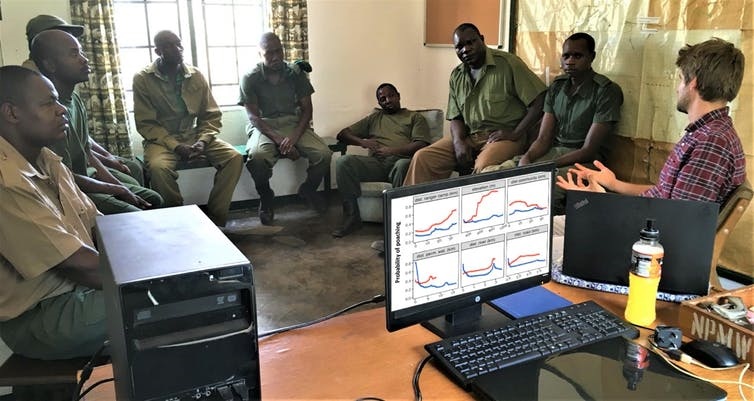 Wildlife rangers discussing the results of our elephant poaching models at a ranger station in the Zambezi Valley, Zimbabwe. (Timothy Kuiper and used with permission of the rangers)

Ranger insights really shone when we re-visited Chewore after running our models and asked rangers to interrogate the results. We conducted two focus groups with 7-8 rangers each, presenting graphs of key model predictions and asking rangers to give us their thoughts.

It emerged after lively discussion that some model scenarios produced results that simply didn’t make sense in light of what the rangers knew. This forced us to reflect on our models and ultimately led us to recognise the poor assumptions we made in one of our bias-correction scenarios.

This also meant that we were more confident with our final predictions.

People’s experiences and observations might be subjective, while statistical models might be based on poor assumptions. We advocate combining these diverse sources of insight to produce more reliable knowledge in the face of uncertainty.

More importantly, our work demonstrates the value of meaningfully engaging rangers in conceptualising and tackling conservation problems, rather than seeing them as passive nodes through which conservation strategies are enacted. Our work shows that rangers are far more than the people who take on poachers at the frontline of conservation; they are also ecologists with a deep understanding of the areas they patrol.

We live in a world where facts and fiction get blurred
In times of uncertainty you need journalism you can trust. For 14 free days, you can have access to a world of in-depth analyses, investigative journalism, top opinions and a range of features. Journalism strengthens democracy. Invest in the future today. Thereafter you will be billed R75 per month. You can cancel anytime and if you cancel within 14 days you won't be billed.
Subscribe to News24
Related Links
Rare one-horned rhino killed as poaching attempts increase amid India coronavirus lockdown
Nearly 50 rhino killed in Botswana in 10 months as poaching surges
Next on News24
Mozambique detects polio case after Malawi outbreak

3 scoop the Daily Lotto prize!
Full list of lottery results
Voting Booth
As a parent, what do you struggle to find money for?
Please select an option Oops! Something went wrong, please try again later.
Nappies, they cost too much
6% - 271 votes
Formula and food, it's getting so expensive
18% - 736 votes
Creche and school fees are a struggle every month
76% - 3167 votes
Previous Results
Podcasts
PODCAST | The Story: What is behind Khayelitsha's recent mass shootings?