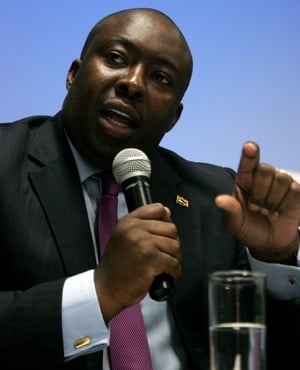 Zimbabwean former first lady Grace Mugabe's ally has reportedly been arrested on charges of criminal abuse of office during his two tenures as a minister under former president Robert Mugabe’s era.

According to the state-owned Chronicle newspaper, Saviour Kasukuwere spent a night in prison on Monday on four counts of criminal abuse of office.

He was, however, freed on $3 000 bail, coupled with some strict bail conditions on Tuesday, New Zimbabwe reported.

Harare magistrate Hosiah Mujaya ordered him to surrender his passport and title deeds to his house in Nyanga, report to police once a week and not to interfere with state witnesses, the report said.

Kasukuwere was facing three counts of criminal abuse of office during his tenure as local government minister and another count as indigenisation minister.

According to NewsDay, Kasukuwere was linked to various fraudulent land deals, among them dishing out vast tracts of land worth over $2m to Grace Mugabe's sister, Shuvai Gumbochuma, without following due process.

Gumbochuma was arrested on the same issue last week and was released on a $500 bail which was coupled with tough bail conditions.

It was  alleged that in 2014 Gumbochuma successfully applied for state land worth more than $400 000 to develop into stands for low-cost housing in Harare. She "fraudulently" acquired the land in March 2015 from the local government ministry after submitting false documents which claimed she had the capacity to develop the lands. But instead of developing the land, she allegedly sold it to another land developer for more than $2 million, a Herald report said.

"Gumbochuma profiteered from state land thereby distorting the market value of the land from a mere $424 426 to an inflated value of $2 060 000 without making any developments," the Herald said, citing state papers.

According to Daily News, as indigenisation minister, Kasukuwere once came under fire after awarding a company called  Brainworks Capital several indigenisation deals that included a $971m with Zimbabwe Platinum Mines limited.

The company also worked as a financial advisor on the indigenisation of six other top earning companies which were indigenised under ex-president Robert Mugabe’s reign.

We live in a world where facts and fiction get blurred
In times of uncertainty you need journalism you can trust. For only R75 per month, you have access to a world of in-depth analyses, investigative journalism, top opinions and a range of features. Journalism strengthens democracy. Invest in the future today.
Subscribe to News24
Related Links
Grace Mugabe ally under police 'radar' in wake of grenade attack: report
Zim court frees Grace Mugabe ally, says 'acted reasonably to save his life'
Grace Mugabe ally held for exiting Zim unlawfully – report
Next on News24
Zimbabwe nurses strike over virus equipment shortages

3 scoop the Daily Lotto jackpot
Full list of lottery results
Lockdown For
DAYS
HRS
MINS
Voting Booth
How has the delay in schools' opening impacted your life?
Please select an option Oops! Something went wrong, please try again later.
It's a disaster! We're struggling to manage work and kids at home
40% - 763 votes
It's a struggle, but we learnt lessons from last year's closures
19% - 371 votes
It's a relief, this second wave is bad and kids need to be at home
40% - 770 votes
Previous Results
Podcasts
PODCAST | MISSING MATTHEW EPISODE 3: Decades of false starts add to a family's despair