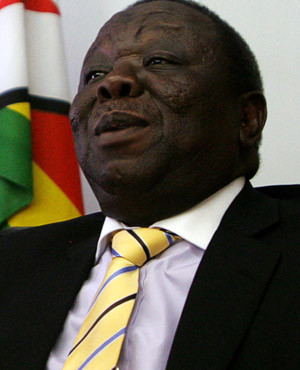 Harare - Zimbabwe's main opposition leader Morgan Tsvangirai of the Movement for Democratic Change (MDC) says "people will decide their future" if securocrats deny him the chance to lead the country - if he wins the 2018 national elections.

Tsvangirai’s remarks came at a time when insiders within opposition parties indicated that he was tipped to lead the proposed opposition coalition that will challenge President Robert Mugabe and his ruling Zanu-PF party in the forthcoming polls.

Tsvangirai has challenged Mugabe, 92, in three consecutive elections in which he has accused the veteran leader of rigging the vote.

Opposition parties were now mulling fielding a single presidential candidate who would challenge the nonagenarian. Mugabe has already been endorsed by Zanu-PF as its candidate.

"We can't go back to the 2008 situation. Power transfer is an issue that we need to deal with and it will be up to the people of Zimbabwe to decide their future if the military and other state functionaries decide to disrespect the will of the electorate," Tsvangirai told News24.

Mugabe unleashed the military and other state security agents who embarked on a terror campaign on opposition supporters, killing more than 400 of Tsvangirai's supporters ahead of the June 2008 presidential run-off. This resulted in Tsvangirai pulling out of the race. He later formed a unity government with Mugabe following the intervention of the Southern African Development Community (SADC).

Some securocrats, such as the Zimbabwe National Army's Major General Douglas Nyikayaramba, have openly declared that they would not salute a leader with no credentials of the country's war of liberation - in apparent reference to Tsvangirai who did not take part in the liberation struggle.

"We have always won elections despite Mugabe deploying soldiers and rigging elections. We are going to pressurise the government so that key democratic reforms are implemented before campaigning for the 2018 elections starts. We need to ensure that electoral laws and the Zimbabwe Electoral Commission are transformed so that the democratic will of the people of Zimbabwe prevails when elections are held," Tsvangirai said.

Meanwhile, the leader of the Zimbabwe People First, Joyce Mujuru's spokesperson Jealousy Mawarire said chances of Mugabe rigging the forthcoming plebiscite were "next to nothing", arguing that his party knew his (Mugabe's) "rigging tactics".

"We have so many people in our party who were in both Zanu-PF and government who know how the people's will was being manipulated and these people could be helpful to our proposed coalition when we go towards 2018," said Mawarire.

We live in a world where facts and fiction get blurred
In times of uncertainty you need journalism you can trust. For only R75 per month, you have access to a world of in-depth analyses, investigative journalism, top opinions and a range of features. Journalism strengthens democracy. Invest in the future today.
Subscribe to News24
Related Links
Tsvangirai NOT my hero: Zim publisher's daring claim divides Twitter
Adopt SA rand: Tsvangirai tells Mugabe
Mugabe 'a stumbling block' to Zim's economic turnaround – Tsvangirai
Next on News24
Zimbabwe nurses strike over virus equipment shortages