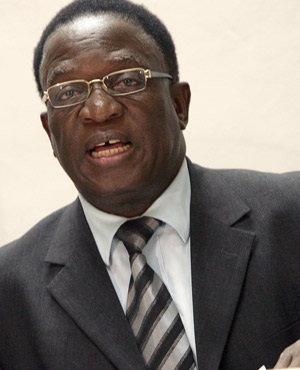 Cape Town – Zimbabwean Vice President Emmerson Mnangagwa has taken a swipe at individuals within the ruling Zanu-PF party, whom he accused of seeking to cause tension between him and his boss, President Robert Mugabe, reports said on Thursday.

This came after Mnangagwa appeared in a picture on social media, in which he held a coffee mug inscribed "I am the boss".

See the picture below.

Mnangwagwa, who was the acting president in the absence of Mugabe - currently on holiday in the Far East - was reportedly leading a Zanu-PF faction calling itself "Team Lacoste" which was angling to take over when Mugabe eventually leaves office. Another camp, made up of young Turks calling itself Generation 40 (G40), was backing First Lady Grace Mugabe to succeed her ageing husband.

The picture, apparently caused fury and controversy, with the Minister of Higher Education Jonathan Moyo, taking to Twitter to lambast the vice president.

"…Everybody knows that the Boss is Gushungo (Mugabe). One boss at a time, please! Kumhanya hakusikusvika veduwe (There is no need to rush)."

Moyo went further to link the mug to an article that appeared in a British magazine, The New Stateman, titled "The last days of Robert Mugabe".

Not to be outdone, Mutodi, a staunch supporter of Mnangagwa, also took to his Facebook page, discrediting Mugabe and heaping praise on Mnangagwa.

Mutodi warned Mugabe that he risked isolating himself if he continued to protect the G40. He cited a case in which Moyo stood accused of siphoning close to half a million dollars of public funds from the Zimbabwe Manpower Development Fund (Zimdef)

According to the state-owned Herald newspaper,  the coffee mug was part of the numerous presents that Mnangagwa received for Christmas and he "took it to his rural home unopened".

"When the acting president and his family were opening the gifts around 22:00 at night, Mutodi – who masqueraded as an MP, arrived, uninvited, and began posing for pictures which he posted on social media where they were latched onto by Prof Moyo who feverishly began tweeting to give them a sinister interpretation," the report said.

In his statement, Mangagwa slammed "elements" within Zanu-PF, whom he said sought to "drive a wedge" between him and Mugabe.

"Against the background of many utterances and activities, all of them unsolicited but claiming or seeking association with my person, my family and or my position both in Zanu-PF and in government, I want to make it clear that there elements on the loose who talk and act as if they support me and or the party, Zanu-PF, when in fact they are being being handled and managed from elsewhere by hostile forces," Mungagwa said.

He continued: These elements are against the President, are against the party and its leadership. In other instances, they have a history of disloyalty to the president, which is well documented.

"It is preposterous to claim to support or act in the same name of the party, or of individuals in Zanu-PF while at the same time attacking President Robert Gabriel Mugabe, himself the undisputed leader of our party.

"Simply put, one cannot pretend to support the party while rejecting its president, attacking its core tenets, or undermining its tried and tested ways of conducting its business."

We live in a world where facts and fiction get blurred
In times of uncertainty you need journalism you can trust. For only R75 per month, you have access to a world of in-depth analyses, investigative journalism, top opinions and a range of features. Journalism strengthens democracy. Invest in the future today.
Subscribe to News24
Related Links
Mugabe's nephew: Most people will be 'wiped out' if VP Mnangagwa becomes president
Stop legal action against my VP, Mugabe tells minister – report
Succession: Zim VP denies plotting to topple Mugabe
Next on News24
Zimbabwe shuts school after 100 students test positive for Covid-19

Here are the Powerball and Powerball Plus results
Full list of lottery results
Lockdown For
DAYS
HRS
MINS
Voting Booth
When assisting your child , did you:
Please select an option Oops! Something went wrong, please try again later.
Follow the school's comprehensive sexuality education (CSE) curriculum?
14% - 409 votes
Adjust the CSE curriculum to suit the family's morals?
24% - 713 votes
Ignore the schools CSE programme and do your own teaching?
63% - 1880 votes
Previous Results
Podcasts
PODCAST | POLITICS UNMUTED: Is government ready to deal with the second wave of infections?