ANALYSIS | Captured and constrained: Ramaphosa goes from ruthless to rudderless There’s no doubt President Cyril Ramaphosa knows precisely what the biggest threats to the national turnaround efforts are. He spelled it out on Thursday night in his address to a joint sitting of the National Assembly. But he remains captured by party dogma and constrained by indecision, writes Pieter du Toit.

When he was elected leader of the ANC, South Africa's governing party since before cellphones, email and Facebook, Cyril Ramaphosa moved swiftly to turn around the ailing Eskom and remove then-president Jacob Zuma as head of state.

Within two weeks of winning the party leadership at the ANC's elective conference at Nasrec, he used his new authority to replace the Eskom board with a new one, smartly moving to get rid of a dysfunctional and corrupted group who were in the middle of the grand project that was state capture.

But his greatest coup was in constructing a viable coalition in the fractious top leadership of the ANC to eject Zuma who had held the ANC in a vice grip for more than decade. In less than eight weeks after Ramaphosa ascended to the top position, Zuma angrily resigned as head of state, paving the way for him to start the process of recovery and restoration.

By Valentine's Day 2018, the new dawn was breaking, with Eskom on the road to recovery and Zuma out of the way. Ramaphosa seemed determined and precise in what he wanted to achieve. Eskom was his biggest crisis of governance, while Zuma was his biggest crisis - and he had dealt with them both efficiently and quickly. President Cyril Ramaphosa and his deputy, David Mabuza, in the National Assembly on Thursday. Ramaphosa seems constrained and captured by ANC dogma. (Media24)

But two years later, a ruthless Ramaphosa seems to have been replaced by a figure far more timid and reluctant, someone who, in his speech on Thursday, implored South Africans to "… not allow fear to stand in our way", but then struggled to lead. Ramaphosa remains captured by narrow party interests and constrained by organisational dogma, seemingly unable to reach beyond painfully slow and inefficient tactics of incrementalism and consensus building.

Some positives, but nothing concrete

The president, in delivering his speech, rose above the anti-democratic, violent and loutish behaviour of Julius Malema and his band of political vagabonds in the EFF, maintaining his dignity in the face of provocative but unsophisticated behaviour.

In the 90 minutes Malema and the EFF had wasted in trying to increase their Twitter following by filibustering proceedings, Ramaphosa ignored their insults and attacks, showing the statesmanship that led many to believe he will indeed be able to lead the process of national recovery.

His national call to action contained some positive announcements, chief among them that cities and towns in a healthy financial position will be allowed to buy electricity from independent power producers, something which the City of Cape Town has gone to court for in order to force the government's hand.

The state will also open a new bid window for renewable energy producers, which, it is expected, will be able to produce electricity much cheaper than the previous round of bids and certainly much cheaper than Eskom currently does.

But these announcements are all related to things that have not happened, things that still must happen. And with South African bureaucracy not only notoriously ineffective while being additionally burdened by prevailing ideologies, there is no guarantee it will be implemented either soon or efficiently.

Take Ramaphosa's announcements about police recruits: last year he said the intake would be increased from 5 000 to 7 000. Ditto this year: from 5 000 to 7 000 trainees. The same with the allocation of high-demand spectrum. In 2019, he told Parliament the licencing of spectrum would happen before the end of the year. On Thursday, he said the same thing.

Most worrying was his non-committal on the troubling question of utilising the pension money of public servants to bail out Eskom. Debate has been raging the whole week about the plan, first mooted by Cosatu, with the Public Investment Corporation clearly saying it is concerned about the idea.

But despite warnings from various quarters, Ramaphosa did not take the possibility off the table. 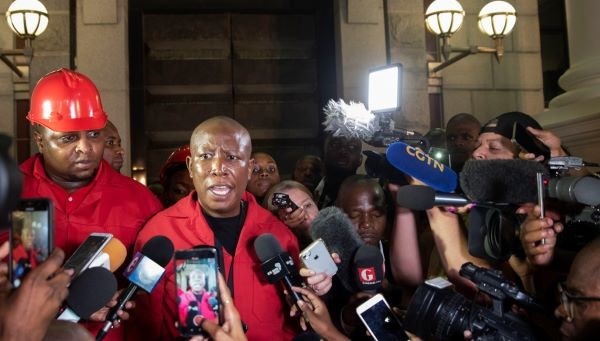 One-trick ponies ... EFF leader Julius Malema and his deputy Floyd Shivambu addressing the media outside the National Assembly after they staged another walkout. (Media24)

His statement about the issue was ambivalent, saying "social partners" agreed funding must be "mobilised" to address Eskom's financial crisis, "in a manner that does not put pensions at risk or compromise the integrity of the financial system".

Eskom can only borrow money from capital markets - at a premium - or the PIC can be forced to invest in the company's debt. Ramaphosa did not say either/or. And South Africans are none the wiser.

He did acknowledge the depth of the country's economic crisis, admitting the government "cannot solve our economic challenges alone" and it has "fallen short" and "made mistakes". He even admitted "that growth and job creation will in large measure be driven by private enterprises".

But for Ramaphosa, and the ANC, the state remains at the centre of any and all national efforts. The speech was awash with task teams, programmes, commissions, masterplans, compacts, protoype sites, initiatives, actions, working groups and models.

"We have established the Project Management Office, the Infrastructure and Investment Unit and the Policy and Research Services to address obstacles to reform and improve government delivery.

"These units are working closely with the Presidential Infrastructure Co-ordinating Commission, InvestSA and the Ease of Doing Business Task Team to remove impediments to investment and growth and ensure that the government demonstrates visible progress quickly.

"With an efficient and capable machinery now in place at the centre of the government, we will focus on the most urgent reforms and intervene where necessary to ensure implementation," Ramaphosa said. A state bank, a new university, a smart city and a sovereign wealth fund ... President Cyril Ramaphosa continues to make grand announcements while his government struggles to adhere to basic principles of governance. (Media24)

But Ramaphosa and his government insist in pushing ahead with Byzantine projects like National Health Insurance, a State Bank and a sovereign wealth fund. And it did not stop there: a smart city, adapted to the needs of the Fourth Industrial Revolution, is being constructed on the West Rand, while Ekurhuleni will be getting its own university, Ramaphosa announced.

These plans are all not only way off base, they are unaffordable, non-core vanity projects.

If Ramaphosa's plan is to take charge of consensus building and compact seeking and leave the heavy lifting to his chief lieutenants - Pravin Gordhan at public enterprises and Tito Mboweni at National Treasury - he needs to let them get on with their jobs.

Gordhan must let the business rescue process at SAA run its course and give Andre de Ruyter at Eskom political cover. And Mboweni must be left alone to lead the fiscal recovery process, including downsizing an ineffective, bloated and costly civil service.

Very few speeches in modern-day South Africa have changed the course of events. In fact, most of those that did were delivered before democracy.

Ramaphosa's address on Thursday night will not be one of those.

We live in a world where facts and fiction get blurred
In times of uncertainty you need journalism you can trust. For only R75 per month, you have access to a world of in-depth analyses, investigative journalism, top opinions and a range of features. Journalism strengthens democracy. Invest in the future today.
Subscribe to News24
Related Links
SONA 2020: Ekurhuleni mayor gets his wish as Ramaphosa announces new science and technology varsity
FULL TEXT: We will not surrender our future to doubt, despair and division - Ramaphosa in 2020...
AS IT HAPPENED | SONA 2020: Ramaphosa concludes 'economic' address, saying SA 'will fear nothing'
Next on News24
FRIDAY BRIEFING | Under the pump: Cricket’s reckoning with race and history