DA posters put up in Phoenix in the lead up to the municipal elections.
PHOTO: RAJESH JANTILAL/AFP

As the municipal elections get closer, analysis of conversations on Twitter show that it is becoming more of a talking point, however probably not in the way parties would want. This week political parties trended on Twitter for all the wrong reasons, write Ebrahim Fakir and Molebogeng Mokoka.

Campaign stunts for the upcoming local government elections left three political parties with egg on their faces this week, as they trended on social media - for all the wrong reasons.

The ANC tried to use the "power of incumbency" as the governing party to open a stadium in Lesseyton, rural Eastern Cape, and show that it is delivering development and keeping to its mandate – only to be lambasted for spending R15 million on what appears to be pitifully poor, sub-par facilities whose input and other costs would not amount to R15 million in value.

READ | Qaanitah Hunter: Politicians, why do you have to be so crass?

The DA put up campaign posters in Phoenix, Durban, that tried to exploit sensitive issues of race and identity following recent insurrectionary violence and subsequent racial profiling in the predominantly Indian suburb of Phoenix in Durban. Recently, Africans were targeted for reprisal attacks after the looting and destruction of property that characterised the insurrection. The community of Phoenix was accused of being "racist vigilantes" when 36 people were killed in unrest in the area following the insurrection. For its part, the Phoenix community members claimed to be "protecting their property, life and livelihoods" from attack. The DA put up campaign posters in the area saying "The ANC called you racists," followed by a separate poster reading ", The DA calls you heroes". Following a major public and media outcry, the DA committed to taking the posters down and issuing a statement meant to serve as an apology - but in fact stopped short of doing so.

Former DA Johannesburg Mayor Herman Mashaba and his new party, ActionSA, launched a frontal attack on the IEC after the Commission "omitted" the party's abbreviated name, or acronym, on ward ballot papers, retaining only the ward candidate's names and the ActionSA logo. Since the 2000 local government elections ballot papers have only borne the name of a ward candidate, the candidate's party acronym or abbreviation and the logo of the party. It subsequently turned out that ActionSA did not comply with the regulatory requirements when filling out the forms registering the party, which require parties to provide an abbreviation or acronym for the party – along with the other requirements. ActionSA, it appears, were simply unable to fill out a rudimentary form.

READ | In-depth: 'ActionSA may have missed a beat' - experts on party's legal action against the IEC

The Centre for Analytics and Behavioural Change (CABC), which has been tracking conversations around the elections on Twitter since July, found that controversies around the three parties contributed to an amplified volume in election conversations between 27 September and 5 October.

Fig. 1 below shows the volume of the conversation between 27 September and 5 October, as well as the unique author count.

The graph shows approximately two posts by each author engaged in the conversation about the elections. Compared to last week's report, the percentage of unique authors is higher: it is clear that many more people are joining the conversation as we draw closer to election day.

Three events contributed to the spikes in the conversation during the week. The first was on 30 September, when President Cyril Ramaphosa moved the country to disaster alert Level 1. The second spike in the conversation was driven by the images of the R15 million Lesseyton sports field going public. The third was when ActionSA attempted to continue tarnishing the IEC for its own inability to comply with the requirements for having its acronym on ward ballot papers.

Social media users expressed their suspicions that government's decision to move the country to lockdown Level 1 was influenced by the need for campaigning for the upcoming elections.

While issues like these are used tactically by opposition parties to turn voters away from the governing party, they simultaneously amplify citizens' mistrust in government, which appears to be a growing factor in the conduct - and possibly the outcome - of the elections.

CABC data confirms that distrust in government is on the increase following the release of the ANC's manifesto, which was negatively received - especially the ANC's appeal to voters to "give it another chance". If this was in any doubt, the trending topics for this week following the ANC manifesto launch were: #R15million and #Voetsekanc – see Fig 2. This negative perception of the ANC was exacerbated by allegations that ANC treasurer-general Paul Mashatile was buying votes. This took root after video footage surfaced showing him handing out money during a church service in Limpopo. Despite the denial of the allegations, the video sparked an online debate around the ethics of politicians buying votes, especially parties continuing to use their power of incumbency.

Shortly after the ANC in the Eastern Cape proudly unveiled a "state-of-the-art" stadium during election campaigning, the backlash slapped them down as opposing political parties and social media users accused the ANC of wasteful expenditure and deceiving the public.

The week's most engaged tweet criticised the ANC for failing to improve services for 27 years. Some accounts within the RET forces network also appear to be abandoning the ANC for the upcoming elections after accusing the party of mistreating former president Jacob Zuma, whose incarceration in prison led to widespread civil unrest in July. 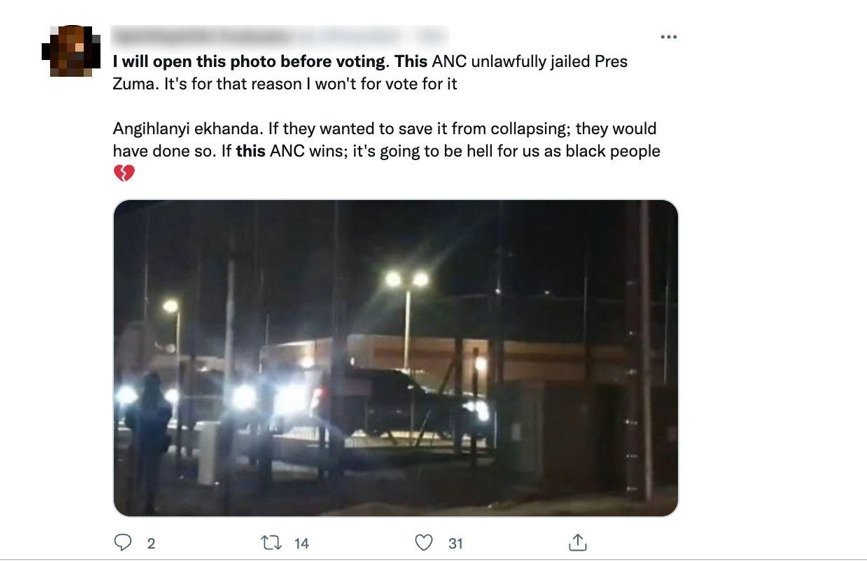 ActionSA's contrived spat with the IEC over the party's own failure to submit correct details to the IEC ensured that ActionSA made it to the top of the tweet engagement during this week. (Fig. 3) The constant spurious doubts cast over the integrity of the IEC by unscrupulous party leaders, often without much merit, appears to be continuing to fuel public mistrust in the IEC.

Among the highest volume of tweeters, this week was the Party of Action (fig.4), which has previously made headlines after alleging that ActionSA stole its logo.

The party was among the top three accounts with the highest tweet volumes, but did not gather much traction since it didn't feature among the most engaged tweets. The party seems to on a mission to promote itself as a party appealing to anti-vaxxers since a large portion of its online presence is dedicated to a Covid-19 prevention strategy that preaches a message of natural immunity and no mandatory masks or vaccines. The CABC will continue to track social media conversations on Twitter about the IEC and the elections to identify and understand the major issues of concern raised by the public, voters, political parties and other electoral stakeholders. The volume and intensity of conversations are likely to gather momentum (and controversy) as we head closer to the elections cycle. It is disturbing that political parties continue to cast unnecessary aspersions on the IEC, fueling public mistrust. It is, however, encouraging that the IEC has now emerged to communicate more forcefully and accurately and correct the fake news and false facts propagated by political parties, their leaders and supporters. It signals that a credible and well-managed election may yet be possible despite the adverse circumstances.

- Ebrahim Fakir is Director of Programmes at the Auwal Socio-Economic Research Institute (ASRI), Molebogeng Mokoka is a journalist and Euston Witbooi, a researcher at the CABC.

Disclaimer: News24 encourages freedom of speech and the expression of diverse views. The views of columnists published on News24 are therefore their own and do not necessarily represent the views of News24.
We live in a world where facts and fiction get blurred
In times of uncertainty you need journalism you can trust. For only R75 per month, you have access to a world of in-depth analyses, investigative journalism, top opinions and a range of features. Journalism strengthens democracy. Invest in the future today.
Subscribe to News24
Next on News24
Tebogo Khaas | Disinformation, protest votes, recalls: Is the IEC doing enough to educate voters?