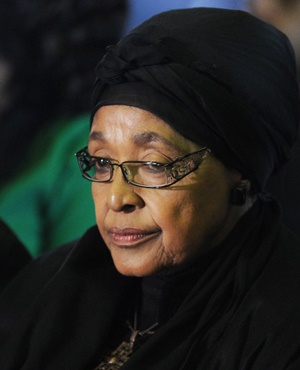 When former president Nelson Mandela wrote about Winnie Madikizela-Mandela in his autobiography, A Long Walk to Freedom, he wrote: "Her spirit, her passion … her courage, her wilfulness: I felt all of these things the moment I saw her."

His description perhaps best explains the complex character that was beloved by so many but was often followed by controversy: someone who let herself be guided by her passion and the courage of her convictions.

"She sometimes made for a controversial figure and whether one agreed with her views or not, one must admire the fact that she never lacked the courage of her convictions," UDM leader and Mandela family friend Bantu Holomisa said on Monday after her passing.

"She called a spade a shovel; and then some. She was strong, passionate, articulate and charismatic. She did not shirk confrontation, but also had a sense of humour and a light-hearted side."

For millions of South Africans Madikizela-Mandela was an icon, the mother of the nation.

Those who knew her as a politician attest to her ability to organise, her tenacity and her dislike for the rulebook. When she was banished to Brandfort in 1977 she was angry and defiant, George Bizos recalls in his book about his friendship with Nelson Mandela, 65 Years of Friendship.

He quotes Madikizela-Mandela's friend Sally Motlana, saying, "They will never succeed in building a wall around her."

"It does not matter where they banish her. This woman is so dynamic she will make the birds sing and the trees rustle wherever she goes."

Madikizela-Mandela harnessed her anger and threw herself into community work in Brandfort, setting up a nursery school, a soup kitchen for schoolchildren, a mobile clinic, and several self-help projects that ranged from growing vegetables to sewing school uniforms.

She was always enormously popular, both during the struggle, as well as later in life. She also knew how to use that popularity to gain support for her causes and rally against what she thought was wrong.

Young people loved her, seeked her out, and trusted her counsel. This was never more evident than during the #FeesMustFall campaign, when she openly supported the students in their struggle against high university fees.

Her public persona aside, close family and friends will remember her as someone with a great sense of humour and a passion for gardening who loved spending time with her grandchildren and great grandchildren.

At her 80th birthday party held in Johannesburg in 2016, her daughter, Zindzi Mandela, said, "There are many books written about her‚ documentaries produced and so on. But there are also some parts of her that people don't know about.

The same party was attended by the likes of Cape Town mayor Patricia de Lille, EFF leader Julius Malema and then deputy president Cyril Ramaphosa – a testament to the respect she demanded across the political board.

And while public opinion about her has often been divided, there can be no dispute that Madikizela-Mandela's life was characterised by the sacrifices she made for the struggle against apartheid. Her contribution came at a heavy personal price.

She reportedly spoke of how the years she spent in prison hardened her.

"Perhaps if you have been given a moment to hold back and wait for the next blow, your emotions wouldn't be blunted as they have been in my case," she said. "When it happens every day of your life; when that pain becomes a way of life, I no longer have the emotion of fear - there is no longer anything I can fear. There is nothing the government has not done to me. There isn't any pain I haven't known."

Madikizela-Mandela often said that one of her biggest regrets was being unable to raise her children in a stable home environment due to her political activities. Her disillusionment with the sacrifice she made in this regard became evident in the later years of her life, when she became increasingly critical of the ANC.

"I feel so naïve for sacrificing my life for this country," she said at the launch of her biography, 491 Days, Prisoner number 1323/69.

But as Zindzi Mandela told the SABC on Monday, "She always held her head up high, she never fell apart…" she told the SABC. "She was an example of strength to all woman."

We live in a world where facts and fiction get blurred
In times of uncertainty you need journalism you can trust. For only R75 per month, you have access to a world of in-depth analyses, investigative journalism, top opinions and a range of features. Journalism strengthens democracy. Invest in the future today.
Subscribe to News24
Related Links
'All South Africans are indebted to Mama Winnie' – Nelson Mandela Foundation
ANCWL 'devastated' over Madikizela-Mandela death
'We have lost a fighter' - Rivonia trialist Andrew Mlangeni
Next on News24
Daniel Silke | South Africa 2021: Hostage nation