Pierre van Tonder.
Foto24 / Lerato Maduna
Pierre van Tonder, the man who led Spur for 24 years, shares why it is time for him to make space for someone else, why he remains a resolute optimist despite the economic devastation caused by Covid-19, how apartheid shaped him and when Spur is planning on launching "virtual brands".

The man who has guided one of South Africa's largest restaurant groups, Spur, through several economic recessions, a transition to democracy, a race fallout and now a global pandemic believes that optimism is the only answer to survive.

And this despite Spur, with more 640 franchise restaurants in the country, facing an uncertain future, with a number of its outlets set to close due to Covid-19 and the national lockdown.

"I suppose if you've kind of delve into the subconscious, one would say: 'Jeez, this is terribly unfair.' It's not going to really help you, in any sense," Pierre van Tonder says seated in his home in Sea Point, Cape Town.

"So you can be like the ostrich sticking head in the ground, [but] it's not going to really help you. You have to be optimistic and you have to look at what's happening out there to see what opportunities are created."

"I wouldn't see it any other way."

Van Tonder was speaking to News24 just days after Spur announced he would be leaving the group after 38 years after starting as a trainee manager at Seven Spur in Cape Town in 1982 when he was 23.

Today a grey-haired 61-year-old Van Tonder says he has been thinking of stepping down as CEO - a position he has held for 24 years - even before the coronavirus pandemic, but the crisis just reminded him the group will require a "different kind of leadership" going forward and that he has run a good race.

It's now the time to pass the baton on to somebody else.

He says Spur, which also owns beloved restaurant brands Panarottis, John Dory's, RocoMamas and Hussar Grill, was completely caught off-guard by the Covid-19 pandemic, and that it would reshape the industry for years going into the future.

Since the beginning of the lockdown, businesses across South Africa, most notably PSG CEO Piet Mouton, have criticised the country's response to the coronavirus, and the shutdown of industry, which they say has destroyed the country's already fragile economy and placed millions of livelihoods at risk.

Van Tonder, however, says from a "utopian point of view" he would like all lockdown regulations to be lifted "tomorrow already", but understands the state has to achieve a fine balancing act.

"But I want us to be realistic and where's the fine balance? You know, because the pandemic in itself is not something that you can just pull your nose up at and ignore," he says, his tone softening.

He says:
The only thing that I do know is that a lot of people are losing their jobs, a lot of restaurants are going to be losing their business and so forth.

"[But] you can't blame anybody or, or start criticizing … well, we can criticise I suppose, because that seems to be the name of the game these days. But having said that, it's a very fine balance that you will go to talk about saving lives here.

"You know that and the pandemic is causing devastation so in one sense you can lift the lockdown, lift the regulations. And in the other sense, you know, you've got a pandemic out there, so you need to balance it finely." Van Tonder says he would not want President Cyril Ramaphosa's job for "all the money in the world".

He admits the lockdown itself brought a sense of "frustration" as Spur's operations were effectively brought to a standstill for two months, and there have been "inconsistencies" with the state's lockdown regulations.

"And I think frustration is probably the better word than hopelessness because I don't think anybody can have hopelessness otherwise, you know, you might as well just give the keys to somebody else and go home and we've never done that, never will be in that position."

He says:
Hopelessness is not something we like to put into our vocab.

While he assumes people will return to sit-down restaurants as lockdown regulations ease, he is almost certain there will be a shift to consumers preferring food deliveries.

Therefore, similar to competitor Kauai which launched its delivery only chicken burger chain Free Bird during the lockdown, Spur is planning to launch "virtual brands" that will only be available through food deliveries.

Today, I think with the virtual brands we are they're in a test phase. They're not an experimental phase and in the test phase.

"When the announcements do come in September, the end of September, we'll be able to disclose our overall strategy in terms of what's happening going forward."

However, he admits these brands will require patience to successfully gain market share. "It's not an overnight success that you can just rewrite the manuals and so forth." 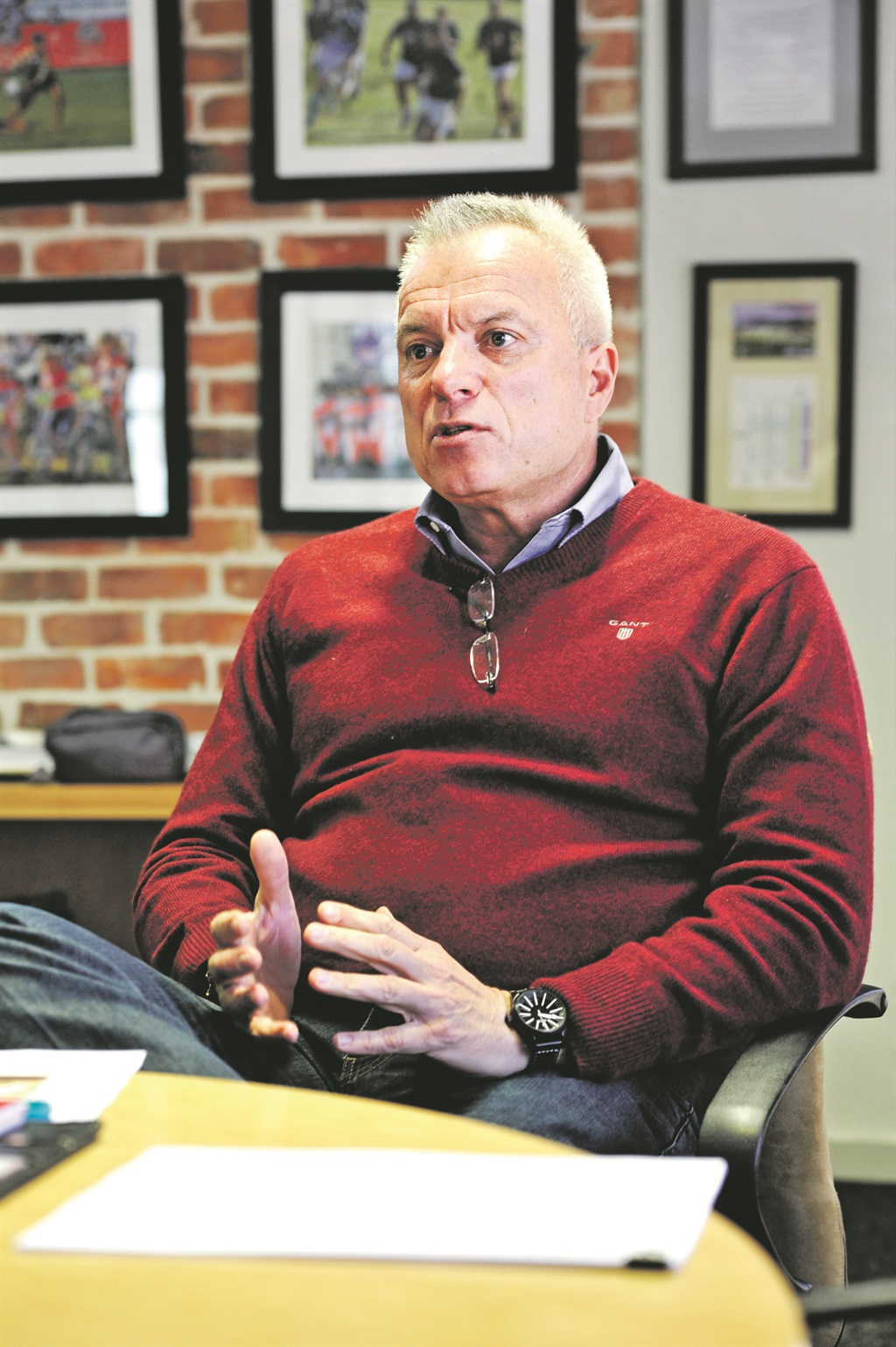 Van Tonder was born in Cape Town where he graduated from Wynberg High School before doing compulsory military service for the then-apartheid military.

He says:
I think as young South Africans, we grew up in a state of anxiety due to the system that was prevalent at that time.

"And, you know, once anxiety never went away, until the system went away."

After the military, he joined the Spur group without tertiary training under the guidance of Allen Ambor who he credits as one of the major mentors in his life.

"I've worked with him for 33 years. So yeah, he was he definitely had a big influence on my life. He's a great retailer, a great trader, great energetic guy. If you were in close proximity like I to him then it was a learning curve that you could not experience.

"And Seven Spur was the top of the pinnacle to be trained from a restaurant perspective. And we worked enormously long hours but I think if you if I go back in history, I think the training and the foundation that we received there, set me on the path to success, no question."

From there he was appointed managing director of Spur in 1996, and helped the chain adjust to a post-apartheid South Africa, and a number of successful and lesser successful international expansions such as in the UK and Australia.

The Native American inspired restaurant group, which operates on a 99% franchise basis, has since repeatedly been voted South Africa’s favourite restaurant, partly because it has dedicated play areas for children.

The arrival of democracy and rapid economic growth thereafter enabled Spur to grow into the dominant player that it is today, Van Tonder says.

By the grace of God regard that we had the changes that we had in South Africa. Things are certainly better today.

One of the biggest challenges of his career came in 2017 when a video showing a man physically threatening a woman in front of his and her children at a Spur restaurant went viral on social media, and ignited nationwide outrage.

Shortly after, Spur banned the man which sparked trade union Solidarity to launch a boycott of the group.

"We accept we made mistakes in dealing with this issue, and we have started a process to learn how to improve our response to such matters in future," Van Tonder wrote in an open letter to Solidarity’s head, Dirk Hermann, at the time.

Looking back, Van Tonder says it was a stressful time, but he learnt valuable lessons from it.

He says:
It was just unpleasant, there's nothing else I can say about it… it was just to be caught in that type of racial tension-type of thing is really unpleasant.

"But it is what it is and it was done at that particular time. And, you know, if I could turn back the clock, I don't think one would do anything any differently. One would probably handle it differently."

Despite the international conversation taking place around cultural appropriation, Van Tonder says he has not really encountered opposition to the Spur group's Native American brand identity.

"I mean, we had one or two guys write to us from wherever they are and so forth. But I think those are they're minuscule in their kind of in the rhetoric.

I think, people today are so sensitized to anything out there that could or couldn't happen. So I'll leave that one to the new guys.

Van Tonder says he has someone in mind "who he has worked with for many years" who can fill his shoes, but that is ultimately up to the board to decide.

The father of two credits his entrepreneurial spirit to his mother "who was a businesswoman in her own right" and worked in retail.

And he says his wife, who has been married to for 31 years, has been the greatest source of strength during the "high and lows".

She’s lived my Spur journey vicariously through me.

Upon leaving Spur, Van Tonder, an avid golfer, says he hopes to find other entrepreneurial opportunities as he is "too young to retire".

He says South Africa's current high unemployment rate is not sustainable, but has belief the pandemic will bring about the necessary reforms. And he has no plans to leave South Africa anytime soon.

His resolute optimism, he says, is ingrained in him by the mere fact that he is South African.

"I think South African businesspeople are resilient even If you look at the successes that some of our executives had overseas: I think their resilience and their positive attitude and the experiences they've been through in South Africa, you know, stood the test of time."

We live in a world where facts and fiction get blurred
In times of uncertainty you need journalism you can trust. For 14 free days, you can have access to a world of in-depth analyses, investigative journalism, top opinions and a range of features. Journalism strengthens democracy. Invest in the future today. Thereafter you will be billed R75 per month. You can cancel anytime and if you cancel within 14 days you won't be billed.
Subscribe to News24
Related Links
SATURDAY PROFILE | Prof Shabir Madhi: ‘I have bigger impact outside MAC than on it’
SATURDAY PROFILE | Nic Spaull: SA needed Covid-19 for social change
SATURDAY PROFILE | Gauteng Health MEC Bandile Masuku: We hopefully won't surpass 'maybe 2 000'...
Next on News24
EXPLAINER | King Misuzulu and Prince Simakade: Who is the king of the Zulu nation?