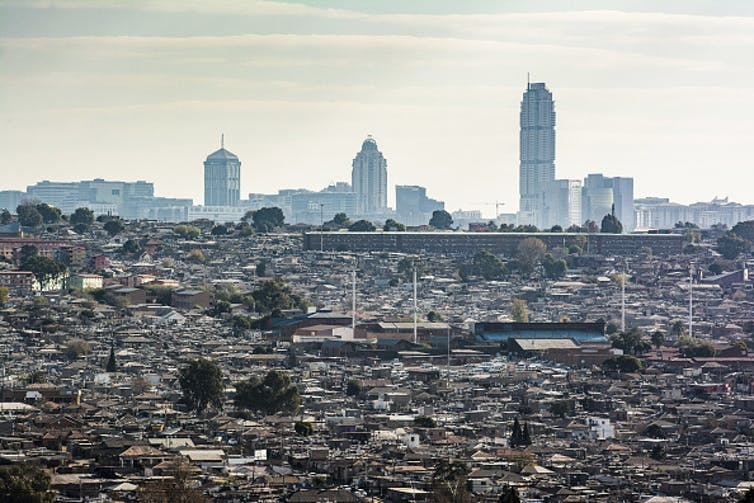 Skyscraper buildings in the Sandton area stand on the skyline beyond residential housing in the Alexandra township in Johannesburg. Photographer: (Waldo Swiegers/Bloomberg via Getty Images)

Twenty seven years after the first democratic elections, South Africa remains highly unequal and is divided between the insiders and outsiders - those who benefit from the market economy and those who don't, writes Steven Friedman.

Twenty seven years into democracy, South African politics is still for the few. And those who complain the most have the least to grumble about.

Since South Africa is highly unequal and remains divided into insiders and outsiders – those who benefit from the market economy and those who can’t – we might expect its politics to be a loud battle between those who have and those who don’t. Most commentators believe it is.

Within the governing African National Congress (ANC), a battle rages between the "radical economic transformation forces", who purport to champion the interests of the poor majority, and their market-friendly opponents.

Outside it, the third biggest party, the Economic Freedom Fighters (EFF), some in the ANC alliance and the advocates of black consciousness and pan-Africanism are assumed to speak for those who live in poverty.

There is much radical talk which creates this impression. The left-wing tradition in South Africa goes back over a century – it was injected into the mainstream of anti-apartheid politics by the alliance between the ANC and the Communist Party. But, while it is common for political activists to use left language, all politics is still, as it was before 1994, insider politics. Then the insiders were whites – now they are the minority who receive an income from the formal economy each week or month.

In the country’s insider politics, the majority who try to survive outside the formal economy are talked about, but are never heard. The "radical economic transformation forces" are people trying to gain a bigger share of what the few enjoy, not to share it with the many. The EFF’s chief concern is to challenge white privilege in the insider economy, not to open it to the outsiders. According to one survey, EFF members have, on average, higher incomes and qualifications than ANC members.

Over the past few years, the country has witnessed a furious debate over whether the government should be able to expropriate land without compensation. Only one group has been ignored – the millions of landless people who have the greatest stake in the outcome.

Since insider politics is often about insisting that you speak for the poor when you have consulted no-one who lives in poverty, both sides of the debate did their best to show that the landless were on their side. Those who wanted expropriation found a few landless people to take to official hearings. Their opponents in the media interviewed just as few landless people who were reported to not want expropriation. But no-one spoke for the people without land.

During the first year of Covid-19, a debate raged over whether lockdown measures were needed. The official opposition, the Democratic Alliance, echoed the global right-wing by demanding that all activity be allowed. The EFF insisted that nothing should be opened. The ANC claimed to adopt a “scientific” approach in which public health and the economy’s needs were balanced.

None of them spoke for – and to – the majority who were forced to travel on taxis which they knew might spread the virus, to earn incomes in ways which might infect them, and whose need was to find a way to feed their families without falling ill.

Insider politics also shapes another conflict which divides “left” and “right” – the demand for free higher education. This is a rallying cry of the left which is denounced by opponents as a Marxist assault on the market economy. But the “left” demand boils down to insisting that the children of the corporate and professional elite should be educated at public expense. This, would, of course, mean that less money would be available to address the needs of people living in poverty.

There are many other examples which underline a reality in which no-one speaks for the outsiders except some local organisations which are ignored by the mainstream debate. It is why policies aimed at ending the exclusion of the outsiders – or at least at helping them to survive – usually fail. They are products of what insider politics think the majority need, not what the outsiders want.

There is a perverse side of insider politics: it ensures that the government is routinely denounced by those whom democracy has benefited while those whom it has largely left out remain silent.

The gap between insiders and outsiders is also that between suburbs on the one hand, low-income townships – the (almost) exclusively black urban residential areas – and shack settlements on the other. The suburbs are inhabited by the more affluent insiders. Not only does the ANC enjoy little support in these areas – it and the government are targets of deep contempt there. No-one wins respect in the suburbs by saying anything good about the government.

But suburban residents enjoy full economic and political freedom. They can also ensure that they receive much higher standards of public service than others: if the power or water supply is interrupted, suburbanites quickly begin demanding that the problem is fixed. They don’t always get what they want, but their problems are addressed more quickly than the rest of the country’s. And they can rely on privately provided services to make up the slack.

In the townships and shack settlements, the ANC, despite some setbacks, still tends to win elections handily. It is often so dominant that the important conflicts happen within it. It is not uncommon for ANC activists to mobilise protest against an ANC mayor or councillor.

But people aren’t free since local power holders don’t like competition and are often able, working at times with the police, to suppress people who speak and act independently. The best-known example is the shack dweller organisation Abahlali base mjondolo, which has endured sustained violence because it threatens local power holders.

The great irony, of course, is that the areas which denounce the government can better influence it than those which support it. This speaks to an important reality: that the majority does not yet rule, even though the constitution says it should.

This ensures that South African democracy is vigorous – but only for a minority of the population. The insiders use their freedoms to engage in heated contest while the majority is forced to accept whatever they decide. Until this changes, South Africa will not deal effectively with poverty and inequality because those who need change most will remain unheard.

We live in a world where facts and fiction get blurred
In times of uncertainty you need journalism you can trust. For 14 free days, you can have access to a world of in-depth analyses, investigative journalism, top opinions and a range of features. Journalism strengthens democracy. Invest in the future today. Thereafter you will be billed R75 per month. You can cancel anytime and if you cancel within 14 days you won't be billed.
Subscribe to News24
Next on News24
SATURDAY PROFILE | Swimming star Lara van Niekerk: 'I'm finally realising I won two gold medals'