Mmusi Maimane | Choose reconciliation over the politics of race and division We must all be clear, we will not spend time defending colonial legacies. We must be clear that certain images and symbols are hurtful and their presence in the public fora is not useful to reconciliation. We must be clear that there is a difference between the racist laws of apartheid and the affirmative action policies of our democratic state.

Twenty-six years into the story of this democracy, the reconciliation project has been abandoned. Replaced on one side with the division project and on the other side with the looting project.

Our political parties are fuelled by nostalgia of the past, the anger champion in red, nostalgia in blue and corruption and patronage in black, green and gold. These without a legitimate offer of love and hope, simply reduce us to politics of division and race constituency building.

The nett effect will take us down a trajectory of American type politics. As we can see, that is a brand of divisions that produces the worst outcomes for all.

Post-apartheid administrations have had their profound failures and I have been critical of these and continue to be.

Our nation is complex, we have a history of brutal pain but no comparison to today's challenges will help our nation.

Consider for a second, The Minimum Wages Act of 1925, which led to job reservation and promoted white employment. Under this law, certain trades and higher salary scales were earmarked exclusively for whites.

Affirmative Action seeks to provide job opportunities to those previously denied such chances. Even then, candidates have to be qualified and competent.

This is redress, not a punitive measure against any group. Even under redress legislation, we have seen key positions occupied by white South Africans.

A case in point is the recent appointment of the Eskom head.

Surely black candidates had also applied for this tough job. It would have never happened under apartheid that a black candidate would be given such a serious responsibility. It is self-indulgent for anyone to juxtapose these pieces of legislation and claim conditions are worse today than under apartheid.

The One South Africa movement seeks to build and introduce a new model of non-racialism. Although the concept of non-racial South Africa is not new, it is often perverted for petty political gains (especially on Twitter – we cannot afford to give oxygen to views of division).

The principle of a non-racial South Africa doesn't require us to be blind to the racial inequalities that exist. Non-racialism requires us to be anti-racist.

It doesn't demand of the nation to forget the real and present difficulties visited upon us by apartheid. If anything else, it reminds us of the end goal for which we are striving, where the colour of my skin should not determine whether I can get access to quality education or not.

This is crucial for any citizen to understand, as it places us on the same side regardless of race, to fight a war against exclusion.

It asks us the crucial question, which is, how we repair the damage done by the periods of apartheid and colonialism while holding the national fabric together?

Our Constitution is a powerful consensus that gives all citizens equal rights. When South Africans drafted the Constitution the way we did, we were in a more hopeful time. We wanted to set an example for the world, we wanted to show that it's possible to craft a national identity which is based on diversity.

An identity which celebrates diversity and one which acknowledges the horrors of the past, but the hopes of a future. We wanted to walk in love and hope, not anger and division.

Section 29 of our Constitution makes the right to education a fundamental one to all citizens. Our reconciliation project relies on ensuring that all citizens have access to this right.

When confronted with it, rural schools which are still serving majority black citizens, are dysfunctional and are not giving proper effect to this right. If we are to create diverse spaces of work where all candidates can compete fairly for work, we have to address this right and ensure all citizens enjoy the right to equal standards of education.

We have to build a broadening economy that recognises a social labour market system similar to that of Germany. This is our project of economic reconciliation – where our industries and places of work reflect the diverse talents and people in our nation. It's time we work towards economic reconciliation in ways that bring us together, in ways that grow the pie rather than shrink the pie.

We must reform our politics, and thus the landmark judgment on the right for independents to stand for office will further broaden the pool of people entering our politics.

It will build a body of diverse candidates who will work in their constituencies truly in service to the people. When the Electoral Act is redrawn, the intention is that constituencies must never be drawn along racial or tribal lines, but give effect to the diverse nature of our society.

Whilst this is not a panacea for all our ills, it can surely ensure that we begin to build candidates who represent and speak for the interest of all citizens regardless of race. I use the mantra, you don't have to be female to fight for women's rights, you neither have to be black to fight for black people or conversely, you just have to be a citizen who believes in the freedoms and rights of all citizens.

We are on the journey to that end goal as espoused by the late Pan Africanist leader, Robert Sobukwe, when he said: "The structure of the body of man provides evidence to prove the biological unity of the human species. All scientists agree that there is no 'race' that is inferior to others." He further asserts that: "…the word race as applied to man, has no plural form."

Although Sobukwe said this in 1959, he was aware that much work would have to be done to get to that ideal. I am certain that in his grave he acknowledges that we are not yet at that point, despite kilometres travelled.

It will take time, honesty and deliberate efforts for South Africa to get to a point where we live only as one race. The human race. For now, the work includes acknowledging that the face of poverty is still black and female.

Thus, much of our efforts need to be invested in the latter for scales to be balanced.

I read somewhere that looking back will turn you into a pillar of salt. A little salt goes a long way to adding flavour to a dish, but too much salt makes it a bitter dish.

One can only imagine how an oxtail stew would taste with a full pillar of salt. We cannot build the nation we want to from a position of bitterness and resentment.

We need to move beyond arguments that seek to re-litigate apartheid. We must all be clear, it was a horrible period, a crime against humanity and one with no redeeming features.

We must all be clear, we will not spend time defending colonial legacies. We must be clear that certain images and symbols are hurtful and their presence in the public fora is not useful to reconciliation.

We must be clear that there is a difference between the racist laws of apartheid and the affirmative action policies of our democratic state. While both are race based the intention is clearly different.

Affirmative action laws are designed with a restoration and healing motive. A reconciliation motive. Redress is a constitutional and moral imperative, regardless of the capability of the state.

We can triumph together, build a reconciled nation that is focused on our shared objectives, a tomorrow upon which our politics are not determined by race, but truly by ideals.

I know personally that a new South Africa can be built and lived. I see it every day in my own house, I see it in my circles of friends. I know from my waking moment to the moment I lay down my head that we can do better than remain divided.
Mmusi Maimane

We can unite, we can reconcile. There is a lot of work we need to do. We need to make sure that the state is working and not being looted, but we need to come back to the table to talk.

We must not choose hate, we must not choose anger, we must choose love, not just for ourselves and families and tribe, but love for our neighbour. What kind of love? We are called to love one another the same way we love ourselves. That's the golden rule. I think we need to make it fashionable again.

We spoke through the TRC and more work is still needed. It's now upon us as citizens to condemn racism when we see it, to champion equal education for all, to ensure that leaders are held accountable and that our businesses, our homes, our communities, schools, places of worship, political parties are diverse so we can learn from and teach each other.

We can all join the struggle for an inclusive South Africa regardless of our backgrounds. Let's march together towards tomorrow.

- Mmusi Maimane is the lead activist of the OneSA movement.

Related Links
Court should not allow children to be sent into 'the lion's den', Maimane's lawyer argues
Mmusi Maimane: We must open our schools only when it is safe to do so
Mmusi Maimane: Let's build a new normal in South Africa, or the politics will fail us
Share
Next on News24
OPINION | Housing crisis more complex than it seems 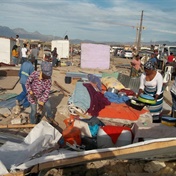