OPINION | A letter from Mogadishu: The unrest in SA should be a wake-up call - Abdi Ismail Samatar 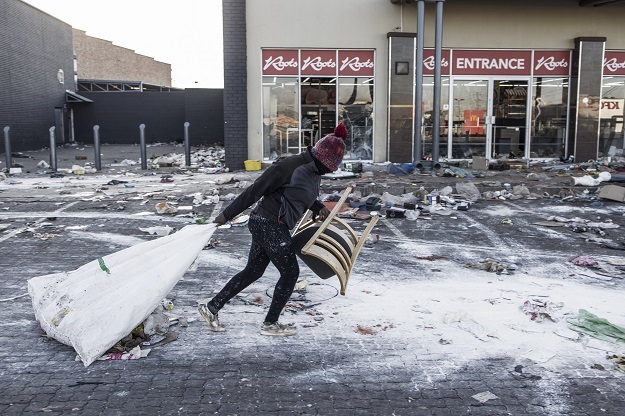 Abdi Ismail Samatar reflects in the recent unrest in South Africa and compares it to Somalia, writing that South Africa will not collapse as Somalia did, there are extraordinary parallels between the postcolonial political histories of the two countries.

Recent riots and the considerable loss of life and destruction of property in South Africa have caused alarm globally. This was also the case in Mogadishu, Somalia's war-ravaged capital. A few of Mogadishu's denizens who know that I annually spend several months at the University of Pretoria have urged me not to return there. This was surprising as I had just spent the past seven months in a city known for terrorism and violence.

The initial shock caused by such comments compelled me to reflect on the postcolonial political histories of the two countries. This retrospection convinced me that those concerns were not as bizarre as they initially appeared to be. I recollect a conversation I had with a group of South Africans in Laudium in 2009, after Zuma was elected president. Given Zuma's reputation for corruption, I told my colleagues that I hoped that South Africa's 2009 election would not replicate the 1967 Somali presidential election. They were dismissive and retorted that my feeling of disquiet was misplaced.

A beacon of hope

What my South African comrades did not know was that Somalia's postcolonial history started, just like South Africa's, as a beacon of hope and democracy after nearly a century of British colonialism and Italian fascism. Somalia's postcolonial elite was divided into two political groups: a civic camp committed to the liberation movement's democratic ideals of justice and collective advancement and their sectarian opponents who saw independence as a vehicle for self-aggrandisement and wealth accumulation. The civics held sway for the first eight years of independence and left behind an admirable record. In fact, they led the continent by being the first postcolonial leaders to leave office democratically, as noted by Zambia's first president Kaunda during a visit to Mogadishu in 1968, when he stated that "Somali democracy should be a model for other African countries'.

Besides practising democracy, those early leaders also reformed the postcolonial state and enacted the continent's first radical public service reform. They ensured the autonomy of the judiciary even when they disagreed with particular court judgements, as was demonstrated when in 1961, the Somali president and government accepted a judge's decision to free, on technical grounds, those who had plotted a coup. This was the first, and possibly the last time those who had conspired to overthrow a government on the continent had walked away free.

Africa's first democrats were defeated in 1967 by a group of sectarian politicians who were determined to use the state as their private fiefdom. They corrupted all public institutions and gutted them of their professional integrity before turning the country into a single-party state. Somalis across the country despised these pseudo-democrats, especially after the regime succeeded in rigging the last parliamentary election in 1969. Several months later, the military took over and during their twenty years' rule tribalised politics, engaged in massive corruption that led to a high level of inequality, and imposed tyrannical rule that decimated the population's social bonds, eventually leading to what we now know as the Somali catastrophe.

South Africa will not collapse as Somalia did, but there are extraordinary parallels between the postcolonial political histories of the two countries. First, the Mandela / Mbeki governments, despite some differences in their styles, were committed to the rule of law and securing the integrity of public institutions. Mandela was the only African leader who left office voluntarily after only one term, although a few others subsequently did so after two terms. Second, Mbeki accepted his party's demand to vacate the presidency despite being aware that the ANC's decision was driven by power politics rather than by the assertion that he posed a danger to the state or the country. Mbeki's stature in the country and on the continent has risen since he left office and the restoration of his dignity is similar to how Somalis now see their country's first president and his prime minister.

The remarks I had made about Zuma's presidency in 2009 haunted me during my annual visits to Pretoria—particularly as things started unravelling during his second term. He stumbled from one major political and ethical scandal to another as the state's institutional integrity and capacity began to waste away. Grand corruption became the lubricant of public affairs and the destruction of the public sector went into a higher gear despite valiant efforts by the Public Protector and the courts to prevent it. Among the most visible manifestations of the decay was the school textbook debacle in several provinces, as in Mpumalanga, elementary school children falling into pit latrines, the Gupta affair, the demise of the SAA, and the Eskom load-shedding fiasco. In addition, the politicisation of SARS and the egregious appetite of tenderpreneurs almost broke the fiscal back of the state. Fortunately, the extraordinary pressure exerted by some opposition political parties, an ANC majority, civil society actors and the courts finally tipped the balance of power and forced Zuma out in a most undignified manner.

Unfortunately, Zuma and his allies were not yet done. They fought back tenaciously from within the ANC while President Ramaphosa moved sluggishly to consolidate his legitimacy in the governing party. However, the legal dragnet—via the Zondo Commission—slowly tightened around Zuma and others like the former ANC Secretary-General, Ace Magashule, but Zuma precipitated a national crisis by refusing to testify at the Commission. Finally, the unthinkable happened as the Constitutional Court sentenced him to 15 months in jail for contempt of court.

Zuma's arrest unleashed what appears to be a planned insurrection. Fortunately, it seems that the fallout of Zuma's arrest has been contained, although the country is still on edge. It is disturbing that KZN was the epicentre of the crisis, which suggests that the legacy of political tribalism lives on and has been cultivated by the sectarian elements of the ANC elite and others.

Although South Africa is not the Somalia of the late 1980s, when tribalistic political factions brought down and cannibalised the state, there are clear and worrying signs that South Africa is heading in a misguided direction. Terrific injustice, deep and systemic inequality, high crime rates and segregation in the form of gated and guarded communities against all others are pushing the country into a political cul de sac. The Covid-19 disaster has painstakingly exposed the tyranny of injustice and inequality as South Africa increasingly resembles George Orwell's Animal Farm. Concerns expressed in places like Mogadishu do appear to have some merit and should be a wake-up call for the leadership and the civic movement in South Africa.

Lucky Sunday for 3 Daily Lotto players
Full list of lottery results
Lockdown For
DAYS
HRS
MINS
Voting Booth
Children between 12 and 17 can now be vaccinated against Covid-19. As a parent I am:
Please select an option Oops! Something went wrong, please try again later.
Relieved, it's been a long wait to this point
50% - 1768 votes
A bit hesitant, and will wait to see how it goes
22% - 775 votes
Completely against my child getting the shot
28% - 979 votes
Previous Results
Podcasts
PODCAST | My Only Story: Fiddling, sex jokes and flirting – another water polo coach exposed