OPINION | Designating Israeli policies as apartheid? It wasn't a conclusion we reached lightly 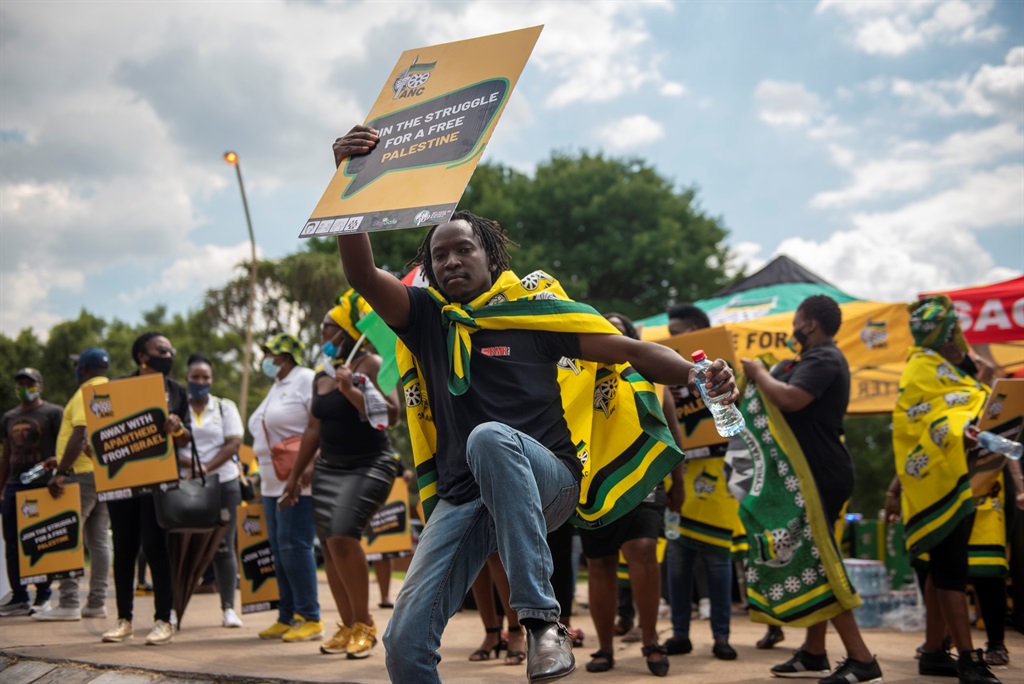 Members of the ANC and SACP protest for a free Palestine at the Israel Embassy on 19 March 2021 in Pretoria. The group protested against apartheid from Israel as part of Human Rights Day celebrations. (Photo by Gallo Images/Alet Pretorius),

The two-tiered treatment between Israelis and Palestinians was always there, writes Eric Goldstein. He argues that Israeli authorities clearly intend to maintain the system of severe discrimination into the future – an intent that constitutes the third prong of the crime of apartheid.

The equal treatment of people is fundamental to universal rights and our shared human values. Yet, millions of Palestinians face systematic discrimination. After more than two years of systematic legal analysis, Human Rights Watch, the organisation where I have spent most of my career, in a recently published report, has come to the conclusion that Israeli officials are committing the crimes of apartheid and persecution.

Based on the South African experience, the international community decided to define apartheid as a crime against humanity and establish mechanisms that would allow the world to end such a situation. Unfortunately, apartheid has again today become a reality for millions of people — this time Palestinians.

When I arrived in Jerusalem in 1989, as Human Rights Watch's first Israel-Palestine researcher, I did not imagine the word apartheid applying to the Israeli and Palestinian context.

I knew that apartheid has legal meaning beyond its origins in South Africa. Since 1973, it has been a universal legal concept, defined by international treaties, and is committed when one group systematically oppresses another group and subjects it to inhumane acts to maintain domination.

At the height of the first intifada, I documented inhumane acts in the brutal means the Israeli army used to repress the popular uprising in the occupied West Bank and Gaza Strip. And my colleagues at Human Rights Watch have also routinely documented grave human rights abuses by Hamas and the Palestinian Authority. However, it has become clear over the years that the oppression of Palestinians in the occupied territory is systematic. But the third element, the intent to maintain that system, was debatable at the time. The peace treaty between Israel and Egypt was barely a decade old. The intifada and international developments created pressure for progress on the Israeli-Palestinian front.

The 1990s brought the first-ever public face-to-face peace talks between Israelis and Palestinians and the Oslo Accords, which created limited interim self-government institutions for Palestinians and a timetable for negotiations to resolve issues of permanent status. Despite these developments, Human Rights Watch and others reported the continued use of unjustified lethal force against demonstrators, systematic torture of suspects, widespread, prolonged detention without charge, punitive home demolitions, and other abuses.

READ | Palestinian ambassador to SA: To deny health rights to Palestinians is to deny them human rights

While the Israeli government responded to our reports with angry denials, dovish Israelis, including my relatives and friends, and those in the peace camp elsewhere, responded along the lines of, "Yes, but": Yes, those terrible things continue, but they are symptoms of the festering conflict, so let's focus instead on achieving peace.

That posture was understandable then. There was a nascent Palestinian Authority, negotiations, and hope that Israeli military rule might soon end. But the hope for a breakthrough in the peace process obscured the repressive status quo and the increasingly clear intention of Israeli authorities to perpetuate a system designed to enable the flourishing of Jewish Israelis at the expense of Palestinians – that is, one of domination.

To be clear, Human Rights Watch is not calling Israel an 'apartheid state'. We are also not singling out Israel for crimes against apartheid and persecution.

However, the present-day reality is that Israeli settlements in the West Bank, including East Jerusalem, more than doubled in population – from 270 000 in 1993 to some 660 000 in 2021. The separation barrier, which Israeli officials justified to prevent suicide bombings inside Israel during the second intifada, dug deep into the West Bank in order to keep settlements, and room for their expansion, on the same side as Israel. And Benjamin Netanyahu, prime minister since 2009, proclaimed that Israel "will continue to rule the entire territory, up to the Jordan [River]".

Beyond the land grabs, authorities have entirely integrated the settlements' sewage system, communication and road networks, and electrical grids and water infrastructure with Israel proper. While settlers fill their swimming pools with subsidised water, their Palestinian neighbours often have to buy water from trucks. Settlements are not only illegal under the Fourth Geneva Convention, they dramatise the rank discrimination between Jews and Palestinians who live side-by-side.

When I arrived in 1989, Palestinians had some ability to move within the West Bank and the Gaza Strip and into Israel, despite temporary curfews and closures that Israel imposed to crush resistance. Three decades later, nearly 600 permanent checkpoints and obstacles vastly complicate the ability of Palestinians to move around. Even when West Bank Palestinians obtain rarely issued permits, soldiers at checkpoints can turn them back or delay them for hours, while cars with Israeli license plates zip past.

Israeli authorities justify these measures as necessitated by security concerns, including deadly attacks by Palestinians on Israeli troops and civilians. But even policies that have a genuine security component are implemented with little effort to balance security against the human rights of millions of Palestinians. Other policies, such as massive confiscation of land in the West Bank and the revocation of residency rights for many Palestinian Jerusalemites, have more to do with establishing Jewish Israeli control over demography and land than security. A settler can acquire residency for a foreign spouse; a Palestinian neighbour cannot.

The two-tiered treatment was always there. What's gone is the possibility of saying, with a straight face, that it is temporary. Israeli authorities today clearly intend to maintain this system of severe discrimination into the future – an intent that constitutes the third prong of the crime of apartheid.

Several other organisations have made similar determinations, including Israeli and Palestinian human rights organisations (B'Tselem, Yesh Din, Al Haq and others).

The international community, including the South African government, must address the current discriminatory reality now, instead of relying on a decades-long peace process to possibly end grave abuse in the future. That means publicly expressing concern and seeking a United Nations commission of inquiry and a UN envoy to mobilise international action to end persecution and apartheid worldwide.

To bring real change, we need to call the situation what it is: an oppressive and discriminatory system that shows no sign of going away and that meets the legal definition of apartheid. We did not reach this conclusion lightly. We have to face the facts – that is the only way to begin to change the status quo.