OPINION | German and French ambassadors: We need SA on our side to bond with Africa, Europe 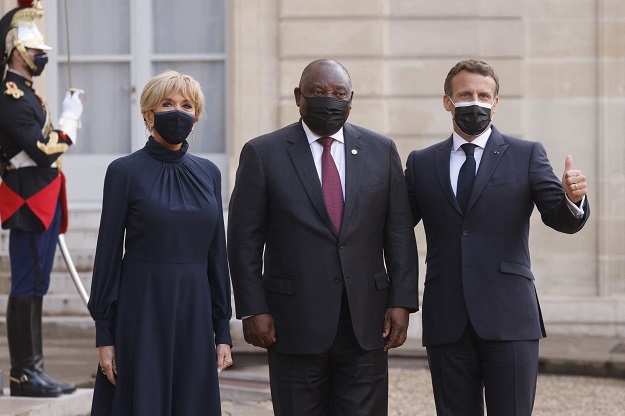 France's president Emmanuel Macron, his wife Brigitte Macron, with Cyril Ramaphosa upon his arrival for a dinner at the Elysee Presidential Palace in Paris.
Ludovic MARIN / AFP

We need South Africa on our side to rebuild the hugely important relationship between Africa and Europe and make it grow on a more solid and, therefore more equitable basis, writes Aurélien Lechevallier and Andreas Peschke .

Three years ago, France and Germany signed the Treaty of Aachen. Fifty-six years to the day after their predecessors Konrad Adenauer and Charles de Gaulle, French President Emmanuel Macron and German Chancellor Angela Merkel reaffirmed their determination to deepen and diversify the Franco-German alliance.

Since then, every year on 22 January, we celebrate our choice of solidarity and friendship.

We Germans and French know that friendship between neighbours is not a given thing. On the contrary, the natural temptation can be mistrust and rivalry, leading to confrontation and even war. France and Germany fought no less than three major wars at the end of the 19th and the beginning of the 20th centuries. Many French and Germans grew up in these times thinking of each other as "hereditary enemies".

Instead, friendship between neighbours is the result of political will, combined with the firm belief that only cooperation can lead to lasting peace and prosperity for all. Friendship then grows in the small and large communities of interests that peaceful and fraternal neighbourhoods bring out in the everyday life of thousands of binational households as well as within the major international fora.

It undoubtedly required courage from our forefathers to choose the path of interdependence. And it is now our responsibility – faced with a world of multiplying crises – to rely on courage and solidarity. The pandemic we have been fighting for the past two years will only be overcome when it is overcome for all. We must also stand united in the fight against climate change, which is exacerbating inequalities and increasing tensions over land and food. To preserve biodiversity, to end transnational organised crime that fuels violence and conflict, to fulfil the United Nations' Sustainable Development Goals, we must work together.

On all these subjects, and despite the differences that naturally sometimes exist between its member states, Europe has demonstrated that it is a determined player with constant positions, an honest interlocutor that dares to impose ambitious decisions on itself, and a reliable partner in a world made uncertain by the reversal of alliances and tensions between powers. As founding members of the European Union, France and Germany jointly strive to be a driving force. Over the decades, we have found that if France and Germany can find a common understanding on a certain subject, chances are that a compromise or solution can be found acceptable to all.

We share this sense of international responsibility with South Africa. South Africa is working on making the continent's integration a reality and ensuring that its voice is heard more globally. It is working for the pacification and resolution of conflicts, and is committed to human rights and democracy. Like France and Germany, it defends multilateralism and engages in dialogue with all, with both openness and high standards.

This is why France and Germany are convinced that, together with South Africa, we can give a new impulse to the relations between Africa and Europe. France, which will hold the Presidency of the Council of the European Union in the first half of 2022, intends to seize this opportunity to reaffirm the importance of Africa for Europe and, conversely, of Europe as Africa's main partner, and to deepen this strategic relationship even further. We are jointly looking forward to the European Union-African Union summit that will take place on February 17-18 in Brussels. Coming out of the pandemic, the summit will be a unique chance to chart the way ahead for our two continents strategically.

We need South Africa on our side to rebuild the hugely important relationship between Africa and Europe and make it grow on a more solid and, therefore more equitable basis. Not because we do not have our differences and disagreements, but because we agree on what is essential: the conviction that only mutual cooperation and dialogue can bring peace and prosperity to the world.

- Aurélien Lechevallier is the French Ambassador to South Africa, Lesotho and Malawi.

- Andreas Peschke is the German Ambassador to South Africa, Lesotho and Eswatini.

Here are the Daily Lotto numbers
Full list of lottery results
Voting Booth
Have you and your family been counted in Census 2022?
Please select an option Oops! Something went wrong, please try again later.
Yes
47% - 3602 votes
No
53% - 4020 votes
Previous Results
Podcasts
PODCAST | The Story: How one incident at Stellenbosch University sheds light on deeper issues