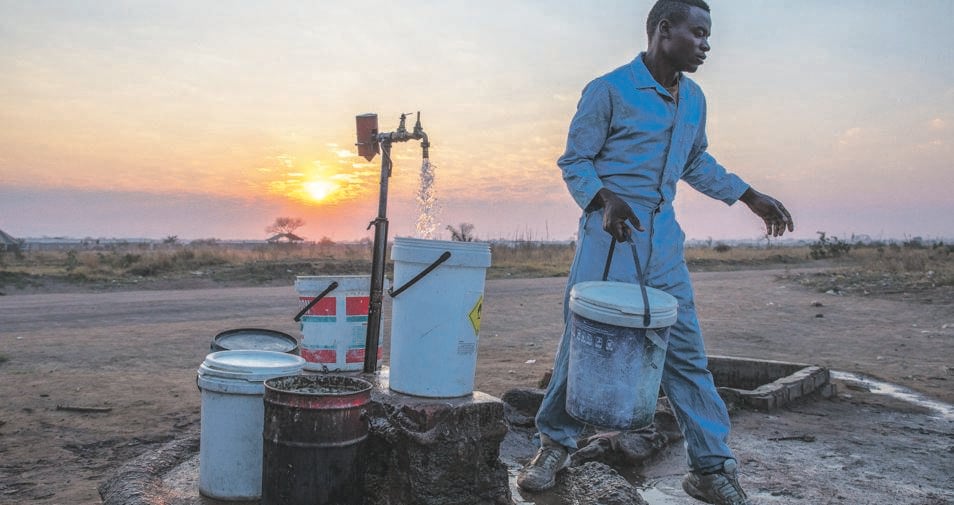 A Zimbabwean fills containers with water at a communal tap as the sun sets in Empompini in Cowdray Park, Bulawayo. (Getty images)

For the past few decades, on the African continent, people have been migrating from one country to the other for various reasons and some of these reasons include environmental issues, writes Tanaka Manungo.

Effects of climate change are being felt all over the planet albeit in an asymmetrical manner.

For a long period of time Africa has enduring climate crisis more than any other continent mainly because of its dependence on rainfall for agricultural purposes, and its history of high rates of social inequalities.

Climate change impacts on the dynamics that drive socio-economic tensions, and fuel the likelihood of violent conflict.

The African Union Transitional Justice Policy, which deals with redress and accountability for past harm done, omits to engage with the issue of climate change in a direct manner.

The African Union (AU), on 12 February 2019 adopted the African Union Transitional Justice Policy which works “as a continental guideline for AU Member States to develop their own context-specific comprehensive policies, strategies and programmes towards democratic and socio-economic transformation, and achieving sustainable peace, justice, reconciliation, social cohesion and healing".

Scholars, institutions, and organisations on the African continent that are connected under the common banner of peace and reconciliation view the AUTJ Policy as “a game changer”, in terms of providing countries with a roadmap to ensuring just, equal and inclusive societies through local, national and regional initiatives.

Nonetheless, peace and reconciliation cannot happen when environmental issues such as climate change are not addressed.

Climate change affects peace and security in Africa. Africa as a continent is highly dependent on agriculture for food production, employment, and income.

Consequently, climate change poses a sever risks to agriculture crop production and the availability of pastures for livestock.

Furthermore, climate change increases the rate of rural depopulation and rural to urban migration which as a result affects dynamics of on-going conflicts in urban areas and increases the likelihood of violent conflict.

Therefore, climate change will not only impact on human development but on peace and security in Africa in general.

Hence, it is important and imperative for the AU to pursue to mitigate the effects of climate change on the African continent.

Peace-building operations that aim to promote building fair, democratic and inclusive societies are increasingly becoming difficult, because climate change is directly affecting the dynamics of on-going conflict in today’s societies and perpetuating the likelihood of violent conflict.

This interaction has been seen in recent years.

For example, South Sudan, but can also be found in countries across the whole African continent: such as Zimbabwe, Malawi, Mozambique, Namibia, and Botswana.

The South Sudanese society has experienced decades of protracted conflicts.

Some which was caused, in part, or exacerbated by climate change, which causes scarcity of resources forcing communities to raid neighbouring communities and causes people to migrate to new areas in search of resources for their own survival, thus increasing the competition for resources with the indigenous people, which then leads to violent conflicts.

Logically, the phenomenon of, conflicts occurring after floods or drought suggests that climate change has been contributing to conflict in South Sudan.

In southern African countries such as Zimbabwe, Malawi, Botswana, and Mozambique climate change has caused catastrophic damage, and humanitarian crises that has led to political tension and conflict.

Due the climatic related change, the above mentioned countries have seen a decline in their ability to utilise natural resources to sustain their societies.

Zimbabwe’s arable land to plough crops has decreased in size, due to hot temperatures and drought. Most of the land where maize and tobacco are grown has been decimated.

Zimbabwe once known as the bread basket of Africa has been reduced to a society that is reliant on external assistance.

Like many other Southern African countries climate change has threatened human health, food and water security, and social, political and economic instability of many Zimbabweans.

A significant number of Zimbabweans have fled the country to richer countries in search of better living conditions while majority of citizens live in poverty with an unemployment rate pegged above 90%, with only 5%-10% of the population working.

Tensions are bound to worsen in the country with a precipitous increase in popular unrest. Furthermore, cross-border migration has its consequences.

For example, the influx of people from Namibia, Malawi, Zimbabwe, and Mozambique increases the misery of the host nation’s population whose lives are already disrupted by conflict.

This is evident in the xenophobic attacks on foreign nationals in South Africa.

Mozambique has been hit by floods and cyclones, notably the floods of 2000-2001, and more recently Cyclone Idai, as well as droughts over the past two decades which have led to resource scarcity, which has caused unmanageable competition between communities.

Severe drought increases the prices of basic foods, and with the absence of employment opportunities the people of Mozambique have found adaptive measures to deal with the crisis.

Some have migrated to richer countries, such as South Africa, whereas others have resorted to popular uprisings. For example, in September 2010, the uprising caused communal violence in Chimoio.

The uprising took place after the government of Mozambique announced the successive rise in price of basic commodities and public transport fares.

The government was entirely blamed for the uprising, popular unrest and collective violence.

However, one can argue that the real culprit is an extended period of climate change which is fuelling and will continue to precipitate crisis in Mozambique.

The inference is that climate change causes drought, immigration, global warming, cyclones, and flooding, which triggers tension and conflict.

Consequently, we cannot ascribe these tensions exclusively to the effects of governance, corruption and political suppression.

In Namibia, climate change is a matter of life and death. The country is highly vulnerable to disasters and natural hazards such as floods and drought.

The effects of climate change pose serious threats to socio-economic development and the livelihood of rural communities, “which makes up 70% of the total population, who are heavily dependent on subsistence agriculture (livestock and crop production)”.

Due to the increase of extreme weather phenomena, Namibians, in the short term, are found migrating from one area to the other escaping flood or drought stricken areas in search for arable land, and water to enhance their survival and livelihood causing competition over resources.

For the past few decades, on the African continent, people have been migrating from one country to the other for various reasons and some of these reasons include environmental issues.

Due to climate change there has been a significant growth in natural resource scarcity, which has caused local competition, which has become unsustainable in societies where conflict resolution institutions does not exist.

Therefore, in order to promote and sustain peace, strategies and policies that tackle climate change related issues have to be considered.

Thus it was very important for the African Union to have included climatic related change issues in the, otherwise important, African Union Transitional Justice Policy.

We live in a world where facts and fiction get blurred
In times of uncertainty you need journalism you can trust. For 14 free days, you can have access to a world of in-depth analyses, investigative journalism, top opinions and a range of features. Journalism strengthens democracy. Invest in the future today. Thereafter you will be billed R75 per month. You can cancel anytime and if you cancel within 14 days you won't be billed.
Subscribe to News24
Related Links
How climate change could make infectious diseases even more difficult to combat in the future
OPINION: Earth Day, our youth and the essential link to climate change
Climate stress and Covid-19 gang up on world’s most vulnerable
Next on News24
Mark Gevisser | How I became a victim of the Mbeki-Zuma spy-vs-spy wars

Here are the results for the Daily Lotto draw
Full list of lottery results
Voting Booth
As a parent, what do you struggle to find money for?
Please select an option Oops! Something went wrong, please try again later.
Nappies, they cost too much
6% - 153 votes
Formula and food, it's getting so expensive
18% - 451 votes
Creche and school fees are a struggle every month
75% - 1853 votes
Previous Results
Podcasts
PODCAST | The Story: What is behind Khayelitsha's recent mass shootings?