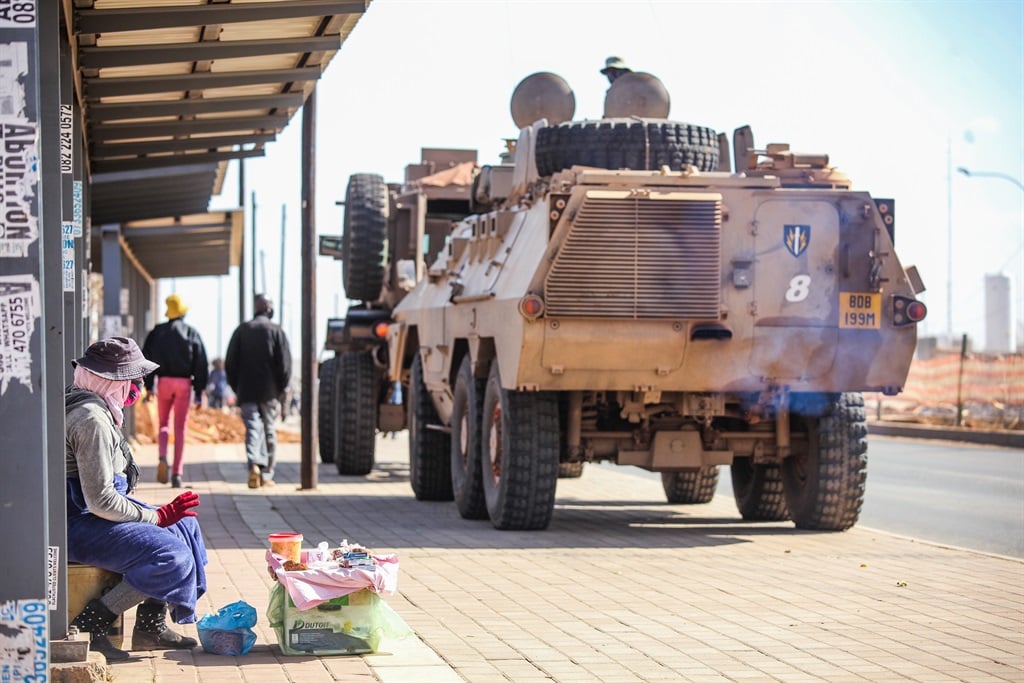 Retired Major-General Ashton Sibango says while the deployment of the SANDF following the unrest action last week should be welcomed, there are some concerning issues that should be taken note of.

South Africans have and continue to rightfully applaud the deployment of the military in support of the South African Police Service (SAPS) seemingly overwhelmed by the recent acts of public unrest and violence, which President Cyril Ramaphosa described as "failed insurrection due to lack of popular support".

The deployment of the military boots on the ground, has not only assisted in stabilising the situation and stopped the carnage, but also served as deterrence.

Some of the masterminds behind the recent public disorder and who may still be undetected will probably think twice before they re-engage on their acts of sabotage. But this should not, in any way, suggest any signs of naivety and atmosphere of over satisfaction on the part of National Executive and Security Cluster as history always repeats itself.

Having said this, there are a few troubling issues, including the Defence Force leadership approach to military posture and practice, which suggests, somehow, an element of losing sight of the standard operational practice as informed, by and large, by military doctrine and guided by defence strategy.

From as early as 2000, an analytical and review process was commissoned aimed at redesigning the defence force and its posture with the view to guiding its approaches to the conduct of its core business. Based on the scarcity of national resources, optimal use of available security resources, conforming to the current trends in the military approach to operations, among others thematic issues, three strategies were designed and adopted as the outcome of the said process, namely, Force Preparation, Joint Force Employment and Joint Force Support.

We are witnessing with this current military deployment the unilateral deployment of the South African Army outside the approved force design and strategy, therefore rendering a designated, established, funded and mandated structure of Joint Operations Division inactive and useless.

READ | Could the unrest have been avoided if a 2018 SSA report had been implemented? We speak to Jane Duncan

The important question is: Has the Defence Force leadership mandated to change the course? If so, has the National Assembly, and National Executive approved of and sanctioned these new developments? If not, the Defence Force leadership owes the nation an answer. Notwithstanding the fact that it is opening its flanks for legal investigative processes should operations deliver undesirable outcomes.

The second observation with the military deployment is the employment of hardcore prime mission equipment, the armoured vehicles in the form of tanks, which is meant to respond against the threat of conventional war setting.

Did the recent failed insurrection events from 12 July suggested any conventional threat against the country to warrant the operational use of these vehicles? Apart from being heavy in fuel and operational costs, could this not be an act of intimidation rather than an act of deterrence? The prevailing situational threat is far from being categorised, equated and deduced as conventional. What informs the employment of these types of vehicles? Do military commanders realise they have other less than lethal weapons in their inventory, which is more user friendly and effective than intimidating hard prime mission equipment.

This is also a golden opportunity to develop better doctrine in support of SAPS during emergencies requiring the enforcement of state authority, rather than being toothless with no bite.

The last issue to raise and which calls for the public to be educated is the flag hoisting parade performed by the military at the Jean Crossing Mall. This sends out mixed messages and opens up a variety of interpretations with inferences to suggest the military is in control. The country is neither under state of emergency nor under martial law usually imposed by military administration.

In this respect, what informs these military impositions on the democratic, civilian and public discourse? In Isixhosa, it is said, “Inqayi ingena ngentlontlo” (meaning that major incidents have insignificant beginnings).

If the Defence Force leadership is allowed to do official business as it pleases, on the one hand, and, on the other hand, military commanders allow unusual military attitudes and behavioural tendencies to raise their ugly heads in the conduct of official business, it will be to our national peril. This is perceived as an unqualified military activity seeking to, subtly, subjugate the whole public under unusual and abnormal life conditions and can also be seen as tantamount to militarisation of the entire citizenry.

- Ashton Sibango is a retired Major-General.