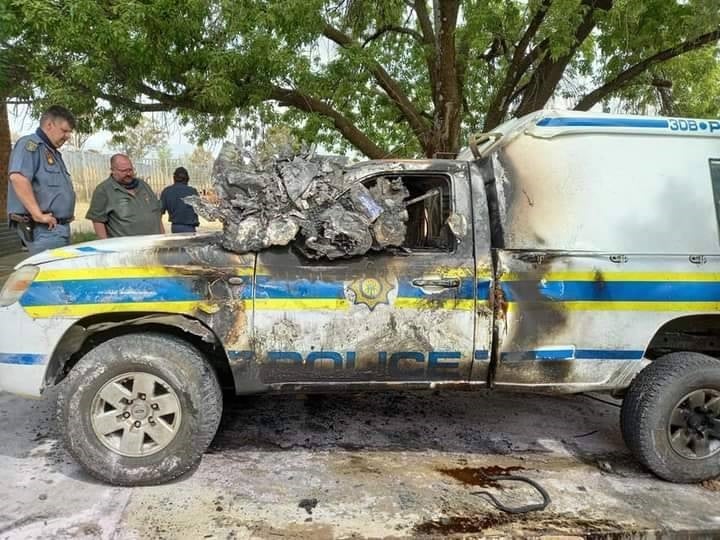 If you look at the three characteristics of culture, South Africa does indeed have a history of violence, writes Theodore Petrus.

The recent events in Senekal, the eastern Free State, have, for the umpteenth time, thrust the related issues of farm murders, racial tension, violent crime, and the responses of political leaders to these issues on the national agenda.

The latest outrage was sparked by the murder of farm manager Brendin Horner.

On Tuesday 6 October, demonstrators - mostly white farmers - embarked on a violent protest at the Senekal Magistrate's Court following the appearance of two suspects for allegedly murdering Horner. According to reports, a gunshot was fired, and a police vehicle was set on fire.

In response, EFF leader Julius Malema called on his "ground forces" to attend the Senekal trial of the murder accused, scheduled for 16 October, to "defend" state property and democracy. This response has generated a polarised reaction from the public, with some supporting the call, while others criticised Malema for inciting violence and racial division.

This drama is playing out while the country is still reeling from continuing incidents of gender-based violence and violence against children.

This begs the question: Do we have a culture of violence in South Africa?

The concept of culture is often used (and misused) to refer to a range of different things. For some, culture refers to the observable distinctive traits of a particular group or collective, such as dress, food, or technology. For others, it refers to more abstract traits such as language, beliefs, or customs and traditions. For still others, culture refers to an appreciation for human expression in the form of art and music. Culture is all of these things, but it is also more than this.

Anthropologically, culture is a central concept that helps us to make sense of human social dynamics and behaviour across all times and locations. As such, culture is seen as a complex system that both shapes, and is shaped by, humans within specific contexts. Culture thus has three key characteristics that concern us here. First, culture is shared. Second, culture is learned. Third, culture is symbolic.

A culture survives over time because it is learned by successive generations. Values, beliefs, customs, practices, language, and many other symbols of culture are transferred from generation to generation through enculturation or socialisation. Experiences of violence, whether as perpetrators or victims or both, are inherited by successive generations. This is why we see many examples of history repeating itself in, for example, violent protests, or excessive force by the police, or perceived violence-inciting rhetoric. None of these are new, as there are various examples throughout our history as a country.

Does violence have any symbolic significance?

What does violence mean in South African society? What is its symbolic value? Violence has become like a language. It is a form of communicating or expressing a range of negative emotions and attitudes, including anger, frustration, fear, anxiety, intolerance, and disrespect for basic human rights. It is still perceived by many as a valid symbol of resistance and may be justified on this basis.

How often do we hear people involved in violent protests saying "violence is the only language the government understands". Thus, violence certainly has symbolic value in the South African historical and contemporary context.

From the above, it could well be argued that, in terms of the three characteristics of culture, there indeed exists a culture of violence in South Africa.

Addressing the culture of violence

But what can we do about it?

Cultural values are more easily shaped and adopted by the youth than by older generations who tend to be more rooted and set in their ways of thinking and behaving.

If we want to change the culture of violence, we need to start changing the values, attitudes, and traits that may engender violence among the youth. These changing values then need to be enculturated among the youth in the hope that it will be internalised sufficiently to promote new ways of thinking and behaving.

How do we achieve this?

By demonstrating proper leadership and by being the examples that we want our youth to become.

READ | Cyril Ramaphosa: Brendin Horner murder: Whether you are black or white, crime is a collective problem

We cannot expect to dismantle the culture of violence if we have leaders who, whether intentional or not, are perceived to be promoting the very values that encourage violence and anarchy.

We need to demonstrate a willingness to use more productive and constructive ways to resolve differences or conflict, other than resorting to destruction of property or harming others.

Lastly, it is imperative that we address the structural violence of an enduring social and economic system that continues to victimise and marginalise many. Culture and environment are interlinked. In order to change the culture of violence, we need to change the environment of violence.

- Theodore Petrus is an associate professor of anthropology at the University of the Free State and is also an academic and business coach.

We live in a world where facts and fiction get blurred
In times of uncertainty you need journalism you can trust. For only R75 per month, you have access to a world of in-depth analyses, investigative journalism, top opinions and a range of features. Journalism strengthens democracy. Invest in the future today.
Subscribe to News24
Related Links
Malema adamant EFF will be at Senekal court on Friday when Brendin Horner suspects appear again
Senekal: Police give assurance that they will take charge when accused appear again on Friday
Senekal: As man returns to court for 'inciting violence', Cele visits family of Brendin Horner
Next on News24
Siya Khumalo | The Civil Union Amendment Bill: Questions for religious conscientious objectors

7 win the Daily Lotto prize
Full list of lottery results
Lockdown For
DAYS
HRS
MINS
Voting Booth
Who do you think is going to win the 2020 US election?
Please select an option Oops! Something went wrong, please try again later.
Biden is going to take it
47% - 8506 votes
It's four more years for Trump
53% - 9659 votes
Previous Results
Podcasts
PODCAST | POLITICS UNMUTED: Money for nothing, but how do we correct the corruption ship?