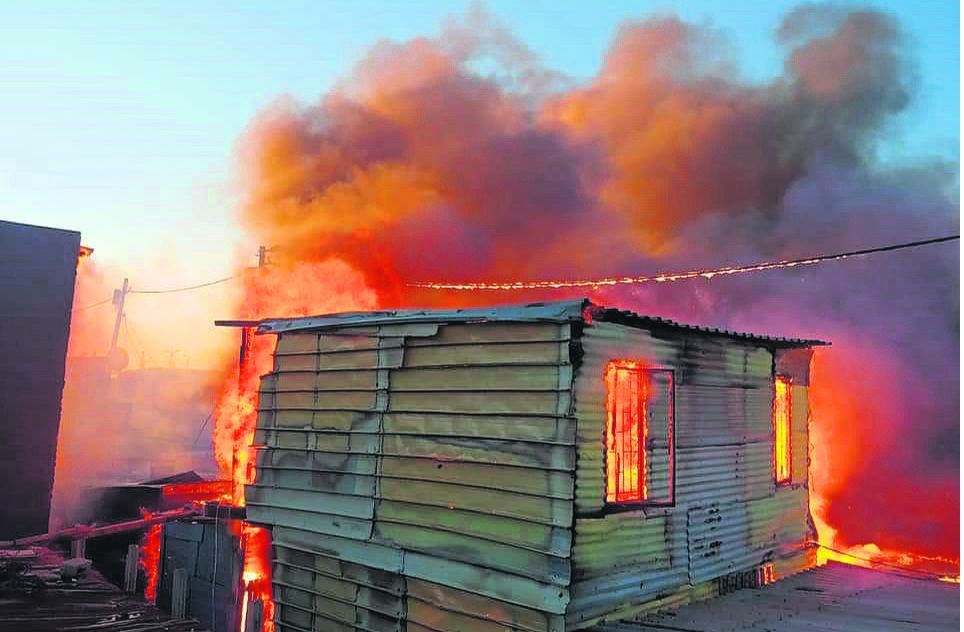 A fire which broke out on 17 December last year in Masiphumelele affected more than 1 000 informal homes.PHOTO: Banda Jr

Authorities need to go back to the drawing board in assisting the community of Masiphumelele, or residents should return to the Public Protector and the SA Human Rights Commission, writes Paul Hoffman.

It was originally known as “Site Five” but the majority (around 60%) Xhosa-speaking residents gave it the indigenous and more dignified name which means “let us succeed” in their home language. Dignity and success have so far eluded Masi, as it is generally known to the locals.

First informally settled in the 1980s, today Masi has two distinct sections, one for the formally housed and “backyarders” in the area nearest Kommetjie Road and the other for the informally housed who have come to occupy nearly all of the land between the formal houses, flats, school, clinic, shops, and churches of the formal part of Masi, and the Noordhoek wetland toward the sea.

A sprawling shackland, more cheek in jowl than cheek by jowl, grows exponentially at a rate that is directly proportional to the rate of decline of the Eastern Cape administration. Many former residents of the Ciskei homeland have come to Masi to seek work, decent education for their children in the good schools of the area and healthcare for their vulnerable: the elderly and young, who do not receive an acceptable standard of care in the Eastern Cape.

RDP houses in the Eastern Cape are abandoned in favour of an informal self-built dwelling that is too hot in summer, too cold and sometimes wet in winter. The entire informally settled area is vulnerable to massive fires (of which there have been many over the years) and to flooding in the rainy season.

Life in the informal part of Masi is tough. About 40% of Masi residents are HIV positive and more than that are unemployed. Eking out a living or at least an existence on the margins of Cape Town society is the lot of most Masipudlians.

Their lot has been the subject matter of complaints to the SA Human Rights Commission (SAHRC) and the Office of the Public Protector. A deal was done with the City in 2016 to improve living conditions, but it has been honoured in the breach by the City.

The Masi community is more than miffed by its mistreatment.

Protests, burning barricades, and the disruption of traffic in Kommetjie Road are the order of the day. All designed to warn the authorities and sensitise the neighbours to the simmering cauldron of misery that is Masi, and as a plea for kinder more considerate official treatment too.

In December 2020 a devastating fire swept through part of the informally settled portion of Masi, completely destroying over 1 000 homes and leaving the occupants homeless and without their meagre, but precious to them, possessions.

Many were away, visiting relatives in the Eastern Cape, and miraculously there was no accompanying loss of life or serious physical injury on this occasion. Previous fires have claimed lives and it is entirely foreseeable that, in the absence of decisive action by the authorities, more lives will be lost or most certainly devastated in future fires. The stress of living with the constant fear of fire takes its toll on the health, both physical and mental, of Masipudlians.

The shacks are so densely packed that the fire engines of the newly built Kommetjie Road Fire Station are unable to fight the fires due to access difficulties. When the fires occur many of the possessions of the informally housed are consumed in the blaze and the psychological impact of the loss as well as the fear of repetition is also severe, especially on the young.

What should inform the official response of the authorities to a disaster of this nature?

The SA State is obliged to, “... respect, protect, promote and fulfil the human rights”, of all who live in the country, including its informal settlements.

It is a worthwhile exercise to consider the rights impacted by the fire and those rights involved in remediating the lot of its victims. It is all very well for the Minister of Human Settlements to visit the scene and make sympathetic sounds in a speech; a swift and constitutionally compliant rebuild plus compensation is what is needed.

In order to reclaim the rights of the victims of the fire a plan that is lawful, reasonable, and procedurally fair needs to be put in place after public participation in the process that should be open, accountable, and responsive to the needs of those affected. Without transparency and public participation the best laid plans are likely to go awry.

The plan needs to address the human rights violated and threatened by the fire. Life, limb, psychological integrity, and dignity are all protected by the Bill of Rights; but not by plans that do not swiftly address the overcrowded conditions in the entire informally settled parts of Masi.

Freedom of movement and residence are guaranteed to all and everyone has a right to an environment that is not harmful to health and well-being. Property rights of those who lost everything in the blaze have been violated in a manner that was entirely foreseeable.

At the centre of the conundrum that is Masi is the right that everyone has to have access to housing. The State must, “... take reasonable legislative and other measures, within its available resources, to achieve the progressive realisation of this right”. The quoted words are taken from section 26 of the Bill of Rights. Under section 27 health care, food, water and social security are similarly catered for and under section 28 the rights of children are described and it is laid down that:

“... a child’s best interests are of paramount importance in every matter concerning the child”.

The mothers of Masi will tell anyone prepared to listen that their children’s best interests are not served in the temporary accommodation now under construction. The units are 6 by 4 sq m. A tiny space for a family of four or more. They are hot now and will be too cold in winter. Sanitation is provided in a manner that has no regard for the dignity of the fire victims. They do not believe the temporariness of their relocation to the units and point to the experience of victims of previous fires who are still housed in temporary relocation areas years later.

The use of State resources to address the consequences of the fire is appropriate.

The Constitution prescribes that the resources have to be used in a manner that is efficient, economic, and effective. The units are none of these, unaccountably so as, “... people’s needs must be responded to, and the public must be encouraged to participate in policy making”.

The outcomes are meant to be development orientated and, “... services must be provided impartially, fairly, equitably and without bias”. This is all set out in section 195 of the Constitution which also calls for constitutional obligations to be performed “diligently and without delay” in section 237.

It is plain that more fires will occur, they are predictable in the sections that survived the last fire and also in the newly built units that are so small and closely packed that they would, if given to prisoners in the EU, be regarded as torture.

A minimum of seven square meters is required according to the famous case of Kalashnikov v Russia. Do the maths: 24 sq meters for a family of four or more is torture in the “temporary” units.

Either the authorities need to go back to the drawing board or the community of Masi needs to go back to the Public Protector and the SA Human Rights Commission. The community to claim its rights, and the authorities to comply with the various obligations set out in our supreme law which have been referred to and summarised above. And yes, the Bill of Rights does outlaw torture as a human rights violation in section 12. Torture is a crime against humanity. Indeed, the fire victims are being treating in a degrading way which is also a violation of section 12 of the Bill of Rights.

A major rethink by official decision-makers, in consultation with the community of Masi is urgently needed. The alternative is more fires, more misery, more protests and more complaints, an unkind vicious circle that does government no credit.

We live in a world where facts and fiction get blurred
In times of uncertainty you need journalism you can trust. For 14 free days, you can have access to a world of in-depth analyses, investigative journalism, top opinions and a range of features. Journalism strengthens democracy. Invest in the future today. Thereafter you will be billed R75 per month. You can cancel anytime and if you cancel within 14 days you won't be billed.
Subscribe to News24
Related Links
Government announces R32m in relief funding after devastating Masiphumelele fire
PICS | City appeals for help after fire guts 1 000 dwellings in Cape Town
Covid-19 | 'People are going on like there is no crisis' in Masiphumelele in Cape Town
Next on News24
Edwin Cameron | Stellenbosch University deserves to be free from hate and degradation