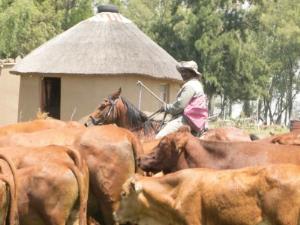 Cattle on offer at the land-reform stock sales at Besters. Cattle farming is taking off on the Besters land-reform farms, making important contributions to rural incomes.
Yves Vanderhaeghen

As long as the politics of memory requires us to have one story declared the ultimate winner and sole truth, the common ground will be lost leading to a battle for the single truth, writes Elmien du Plessis.

A recent legal question guided me to the physical boundaries of our country. As I read about our boundaries and borders, the research spiral took me to treaties concluded in the 1800s. I lost myself in the stories that these treaties tell.

This road-trip of treaties and international agreements ensured that the laws guaranteed that in most part, things stay the same, even if the governments change.

In my imagination I travelled this route. The boundaries of the Transvaal Republic had names of farms that sound familiar to my Afrikaans ear, sprinkled with reference to the indigenous peoples living there in the unfamiliar names of mountains and rivers that in their turn formed the boundaries of communities.

"...[Thence up the course of the Notwane River to Sengoma, being the Poort where the river passes through the Dwarsberg range; thence, as described in the Award given by Lieutenant-Governor Keate, dated October 17, 1871, by Pitlanganyane (narrow place), Deboagnak or Schaapkuil... [...] to the north-western corner beacon of the farm 'Mooimeisjesfontein...'"

And so the boundaries tell the stories of how the lives of the people on the land were so intertwined in their foreignness. We are strangers who've know each other for centuries, divided by imaginary lines that were concretised in harsh laws. The harsh laws that divided us are repealed, but the imaginary and psychological lines remain.

The national boundaries are important. It contains us. Our borders are set out in our Constitution, our story. It tells the story that South Africa is a country, a nation, also because of the boundaries that contain us. The boundary and the treaties that were drawn and established over centuries, and that are cemented in our Constitution, therefore purport to tell us where we belong. It seeks to define who we are, to establish a common identity that transcends the ethno-racial identities that each of us embodies. This is echoed in the last line of our amalgamated anthem that ends with "South Africa our land".

Without the stories that boundaries tell, there would not be a South Africa. The question is: do we believe in the story of South Africa?

The conversation around land that the amendment of Section 25 opened up, is a symptom of our struggle to believe in the story that these national boundaries tell. Inside the South African boundaries, we sit with many stories.

The one is a story of contested boundaries and belonging, of people settling on the land and claiming ownership through treaties and allowances from colonial governments, later by claiming registered title. The title deed draws boundaries that fences entrench. There is a belief that blood and sweat baptised the claim to the land.

It is a story that is indeed true, and that did indeed happen, but that requires a belief in and adherence to Roman-Dutch law as influenced by English law, that underlies it, for a sense of legitimacy. For believers of this story, land that accrues to persons by virtue of being members to a community, held in terms of customary law that only allows insiders with consensus of the community, is a strange unbelievable story.

A belief in this story struggles to acknowledge that dispossession of land was not only a physical act. It was also the enforcement of a legal system strange to the people who were occupying the land in terms of their laws, their story. It rested on the belief that one story was less strange than the other.

The other story – the story of the people who inhabited the area before it was dispossessed physically or by law, is of course also true, and co-exists with the title deed story.

For indigenous people individual title to a whole piece of land, established in terms of proclamations and held to the exclusion of all others, bestowed by a foreign authority and separate from any social relations, was a strange story. In terms of the indigenous story, land belonging is tied up with social relations and a sense of belonging: the ancestors, the living and the yet-to-be-born. Communal land, as set out in the Baleni judgment "forms an inextricable and integral part of this community's way of life [...] a residential plot presents far more than merely a place to live: it is a symbol of social maturity and social dignity. Each residential plot further serves as a critical conduit for the preservation of relations of inter-linkage and mutual dependence between the living and the dead and is critical for the wellbeing of each imizi (household)."

Our Constitution, being a story in itself, carries this contradiction and attempts a reconciliation of opposing stories by recognising the common law alongside the indigenous law. It requires us to hold them both. And it is this discomfort and disconnectedness that sometimes play out when we wrestle with the land question.

It is this possibility that both stories are true that holds the power to either be our downfall or our salvation.

In his book "If this is your land, where are your stories?" Chamberlain tries to answer the question whether land can really ever be home to more than one people. He concludes that it is possible, but that it requires a re-imagination of Them and Us, an ability to hold the ambiguity in Them/Us, Reality/Imagination.

He relies on the role of contradictions as part of the art of storytelling. When we realise that contradiction is inherent in the stories, and when we realise that our stories sound just as strange to Them, than theirs to Us, that is when we find common ground. But as long as the politics of memory requires us to have one story declared the ultimate winner and the sole truth, the common ground will be lost leading to a battle for the single truth. A zero-sum game.

In The Book of Laughter and Forgetting, Kundera writes that "the struggle of man against power is the struggle of memory against forgetting ... The only reason people want to be masters of the future is to change the past. They are fighting for access to the laboratories where photographs are retouched and biographies and histories rewritten."

If the current struggle for power is indeed a struggle to change the past, it is because the ambiguity of two equally true stories can be uncomfortable, and a single truth comforting, at least for the winner of a zero-sum game. Being confronted with the strangeness of your own story can leave one bewildered.

Therefore, our solace lies in the knowing and accepting that both the stories are true. That both stories are familiar and strange at the same time, a realisation that makes it possible for the ears to hear a story that is strange.

This listening to and understanding of the stories of the Other holds the possibility to believe in the collective story that the boundaries of South Africa tells: that we are indeed one sovereign, democratic state, based on human dignity, the achievement of equality and the advancement of human rights and freedoms. From Soebatsfontein, to Umgungundlovu.

- Elmien du Plessis is associate professor in Law at the North-West University.

We live in a world where facts and fiction get blurred
In times of uncertainty you need journalism you can trust. For only R75 per month, you have access to a world of in-depth analyses, investigative journalism, top opinions and a range of features. Journalism strengthens democracy. Invest in the future today.
Subscribe to News24
Related Links
Land panel report looks post-apartheid failures square in the eyes
Land report: Growth vision dispelled by commitment to expropriation
Land reform that unleashes a rural economic miracle should be the goal
Next on News24
Lawson Naidoo | Let's continue to build on the legacy of Gandhi and Madiba