Who looks after the interests of Palestinians? 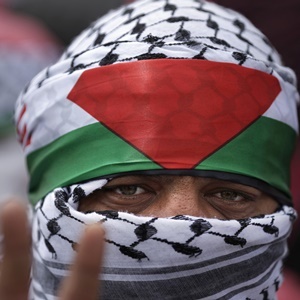 A Palestinian protester demonstrates on the Israel-Gaza border, east of Gaza City in the central Gaza Strip, during the fifth straight Friday of mass demonstrations and clashes along the border with Israel on April 27, 2018. (Mahmud Hams/AFP)

Israelis have their government to care and to protect them. Gazans have no one. Certainly not Hamas. What makes it worse is that the painting of Israel as the sole aggressor in this conflict lets Hamas off the hook completely, writes Howard Feldman.

The tried and tested narrative of the Israel and Hamas conflict is that Israel is the dominant force in the region and that Palestinians suffer daily. The statement is accurate. What follows, however is not.

The incorrect assumption is that the suffering of the Palestinians is caused by the Israeli regime. Failure to recognise the inaccuracy of this will result in continuous oppression and ongoing bloodshed.

Hamas has control of Gaza and is the cause of much of Gazan suffering.

On Monday night, following what seems to be a botched Israeli reconnaissance mission into Gaza, more than 400 rockets were fired from Gaza by Hamas at civilian targets in Israel. Israel's south was on high alert with the iron dome defence system successfully defending its citizen from around 75% of the missiles fired from Gaza.

Until midday Tuesday most South African news publications made no mention of this, despite fatalities in Israel.

Hamas rules Gaza. It allows no freedom of expression, does not allow for any democratic process, kills anyone who it believes is a threat to the power base and routinely abuses gay people. It uses international aid funding to build terror tunnels and to purchase military hardware. Their goal is not the betterment of the people of Gaza but the destruction of Israel.

Hamas does not hide it. They do not pretend. It's what they say and it's what they do. Confirmation is a Google search away.

Hamas does not recognise Israel's right to exist. Their charter openly states that they will remove every Jew (hiding behind a rock) from Israel when they ultimately take over the country.

And yet, South African media chooses to ignore these inconvenient truths.

We live in a world that is complex. And complexity is both tiring and taxing. That is one of the reasons that we search for simplicity. We are attracted to stories that contain good versus evil because it requires little thought and little effort. The result, however is that we might force a situation to suit that narrative, at the cost of the truth.

The story of Israel and the Palestinians is a prime example.

If Israel chooses to retaliate further to the 400 missiles fired the result will be that the residents of Gaza will suffer more. They will, as always, be the largest number of victims in this war primarily because Hamas places its rocket launchers in residential areas. The result of which is devastating to the people of the area.

Israelis have their government to care and to protect them. Gazans have no one. Certainly not Hamas. What makes it worse is that the painting of Israel as the sole aggressor in this conflict lets Hamas off the hook completely and denies the story the full context and the full picture.

This in no way means that Israel is guiltless. Israeli media is often (correctly) deeply critical of its government's behaviour, as are the dissenting voices in its parliament. Global media is equally analytical and, in some cases, ruthless when assessing Israel's behaviour.

And yet the voices of introspection on the other side of the conflict hardly exist. What follows therefore is the inability to have a conversation that is real and balanced. Without any voice that condemns Hamas when necessary, and without Hamas being held accountable for their actions, it is not a conversation at all. Rather, it is a regurgitation of the same narrative. Repetition that is no more accurate than it was the last time.

There is currently an uneasy ceasefire. If the conflict resumes and Israel retaliates, there is little doubt that media will blame Israel. The narrative is firmly entrenched and is hardly questioned. If it were interrogated, then Palestinian activists and the BDS would, at least from time to time, be critical of the behaviour of Hamas. The fact that they are never able to condemn their actions, sadly, tells the whole story.

Residents of Gaza need protection, which is more than likely why the sympathetic media focusses on their suffering. The mistake, however is to solely look across the border into Israel in order to find the aggressor, when the cause of all the pain lies within Gaza itself.

We live in a world where facts and fiction get blurred
In times of uncertainty you need journalism you can trust. For only R75 per month, you have access to a world of in-depth analyses, investigative journalism, top opinions and a range of features. Journalism strengthens democracy. Invest in the future today.
Subscribe to News24
Related Links
Gigaba's pinky gesture and the values we model to our children
US synagogue shooting no surprise as anti-Semitism thrives
Are strange factors driving coverage of Khashoggi's murder?
Next on News24
Howard Feldman | The past might have seemed brighter - but right now is better