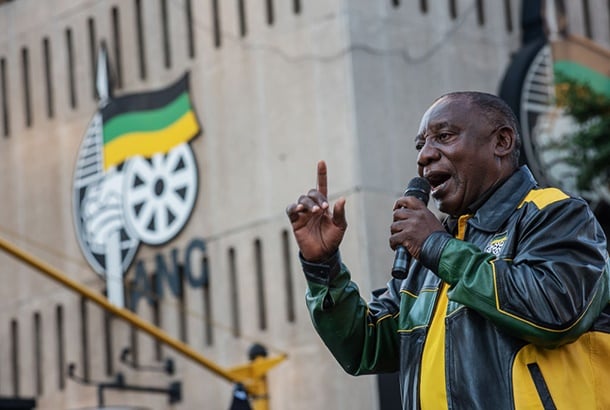 President Cyril Ramaphosa addresses the crowd during an ANC election victory rally on May 12, 2019, in central Johannesburg. (Photo: Michele Spatari/NurPhoto via Getty Images)

It's naïve to simplistically divide the ANC into "good guys" and "bad guys". Things are much more complex than that, writes Jeremy Cronin.

The late security branch warrant-officer "Spyker" van Wyk was a psychopath of note. Like Julius Malema who seems to have similar pathological skills, he would change persona in a flash. In Van Wyk's case, the sudden switches were not the good-cop, bad-cop routine. He would go from bad to very bad.

Back in 1976 I had the unhappy experience of being driven in leg-irons from Cape Town to the security branch head-office in Pretoria along with the self-same Van Wyk and two of his accomplices. In between boasting, for my edification, about how they had "dealt with" Imam Haron, murdered while in custody in 1969, there was a memorable discussion amongst themselves about Marxism-Leninism. I gathered that the two were preparing for the security police exam on "communism", Van Wyk who had just written and scored, as I recall, six out of ten, was their coach.

This past week, I was reminded of that earnest communism-for-dummies discussion when I heard Helen Zille on radio. She was explaining what, to use her terms, that arch "communist concept national democratic [NDR] revolution" actually means.

In this moment of post-New Dawn depression, Zille is advocating, to quote from a recent Rapport article authored by her: "a far-reaching realignment of South African politics, to build a new 'centre majority' of South Africans". Well, okay, maybe. But, as the colloquial saying has it: "you and whose army?" Who is to be in? And who is to be excluded from Zille's envisaged grand realignment in defence of constitutionalism and non-racialism?

This is where Zille deploys her Cold War litmus test: if you mention the concept NDR you turn nasty red. She tells us that "state capture over the past 20 years was not a Zuma aberration, as many people seem to think. It was, and remains, an essential ingredient of the NDR, in any format."

On the basis of this Cold War identikit, Zille takes issue with the idea that a Cyril Ramaphosa or a Pravin Gordhan could really ever be part of the struggle for constitutionalism against state capture – as if they were not currently thrust into the very front-line of this struggle. They are, she concedes, "undoubtedly less corrupt" than others in the ANC, but because they, too, invoke the idea of a NDR, they are inextricably part of the problem.

This, I am afraid, is both tactically and strategically inept. In fact, it ends up with exactly the same positioning that the Zuma fight-back campaign, routed through the Public Protector, seeks to achieve around investigating campaign donations to Ramaphosa.

It is, indeed, a matter of grave concern that internal party election campaigns are now costing millions of rands. It is problematic that Mmusi Maimane's internal DA presidential campaign raised R100m. It is highly problematic that the CR17 internal ANC presidential campaign raised around half-a-billion rand, not to mention the funding received by other candidates. But this swamping of inner party-political elections with business-interest money is one thing. State capture, that is to say the industrial-scale looting of Eskom, Transnet and SAA into a near-death experience along with money laundering, is quite another thing.

As Sun Tzu might have said some two thousand and five hundred years ago, and as Mao Zedong did say last century, in politics as in warfare it is absolutely critical to be able to distinguish the principal front of struggle in any particular situation from secondary differences, no matter how large these might be.

Of course, it's naïve to simplistically divide the ANC into "good guys" and "bad guys". Things are more complex than that. Moreover, I certainly agree with Mcebisi Jonas that as a country we cannot be passive spectators, held hostage to the hope that the ANC may (or may not) reform itself. And, of course, neither Ramaphosa nor Gordhan are single-handed saviours. (Why on earth, by the way, did Ramaphosa allow his presidency to be associated with the Sun King notion of a rising "new dawn", rather than the earlier and more collaborative idea of a "new deal"?)

Zille, for all of her undoubted pluckiness, can be extraordinarily muddle-headed. See, for instance, the mess she has got herself into over the question of colonialism, praising it for having brought, amongst other things, piped water to the dark folk of the world. In fact, her confusion over the idea of a NDR and her colonialism muddle are related.

When, in the late 1960s the ANC began to use the concept of a NDR, it was in recognition of the fact that the struggle in South Africa was akin to other anti-colonial struggles across the Third World. (It wasn't to proclaim a struggle against piped water.) In our case, this colonial problem was, so to speak, largely an internal colonialism, with a minority ruling bloc and a nationally oppressed majority.

It was a system that reproduced within the boundaries of a single country acute First and Third World realities, cheek-by-jowl – development and under-development, each the cause and effect of the other.

The deep structures of this system are still largely untransformed, hence the continued reproduction of acute racialised, gendered and spatial inequalities. For those of us, including Ramaphosa and Gordhan, who still invoke the relevance of a national democratic struggle, this is the nub of the matter.

Of course, no political strategy or ideological-ism is immune to vulgarisation. A progressive liberalism can be found in the social justice aspirations of the founders of the ANC. It was to be welcomed in the human rights campaigning of Helen Suzman or the Black Sash in the granite years of high apartheid. But liberalism is also invoked by the likes of the Free Market Foundation, calling for the unleashing of untrammelled market appetites with all of their ecocidal implications in the midst of runaway climate change.

Likewise, you will find thoroughly vulgarised versions of the NDR, notably among the Zuma-aligned grouping. But that's no excuse for Zille's cut-and-paste Cold War-era hatchet job – particularly when the stakes are so high.

We live in a world where facts and fiction get blurred
In times of uncertainty you need journalism you can trust. For only R75 per month, you have access to a world of in-depth analyses, investigative journalism, top opinions and a range of features. Journalism strengthens democracy. Invest in the future today.
Subscribe to News24
Related Links
Land panel report looks post-apartheid failures square in the eyes
Zuma's conspiracy narrative a timely warning against the dangers of paranoia
Unless it leans leftwards, the centre won't hold
Next on News24
Jeremy Cronin: No excuse for Zille's hatchet-job analysis of state capture