Lessons from the Hajj on the purpouse of life 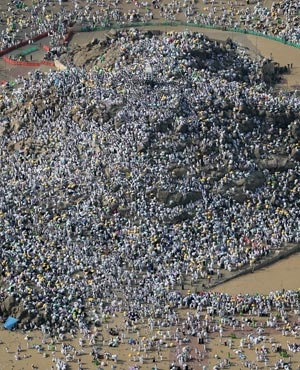 Hajj, the journey to the house of the Almighty in Makkah, is one of the pillars of Islam; the others being Shahadah (Testimony of faith), Salah (five daily Prayer), Saum (Fasting in the month of Ramadan) and Zakah (giving charity).

All Muslims are required to perform Hajj once in their life, if health and finances permit this. It is not only the largest annual gathering of Muslims, but the largest pilgrimage in the world.

The Hajj is associated with the life of Prophet Muhammed (PBUH), Prophet Ibrahim, his wife Hajar and their son Ishmael. The rituals or worship are designed to advance the bonds of Islamic unity and sacrifice. Every year, millions of Muslims from across the globe make their way to Mecca to perform Hajj.

The hearts, eyes and ears of every Muslim have been on Arabia for the past few days as pilgrims from all parts of the globe embark on their Hajj pilgrimage.

The Hajj inculcates a sense of belonging to one community (Ummah) as Muslims of different countries, races, cultures, traditions, shades and nationalities sleep, eat, go around the Ka’ba, pray and repeatedly recite the supplications to the Almighty known as the Labbayk or Talbiya: “Here I am O God, here I am at your service, and you have no partner. Here I am. All praise, grace, and dominion belong to you. You have no partner”, together in large numbers.

Hajj has a much deeper meaning and objective. It is not just the completing of rituals. During Hajj many lessons are learnt from this spiritual pilgrimage and life-changing experience. A noteworthy point of Hajj is that it removes all symbols of race, class, self-aggrandisement, and wealth, which is why the pilgrims wear simple clothes for the pilgrimage. Males wear two pieces of unstitched white towels or cloth, and females wear a simple dress.

Malcolm X, an African-American civil rights activist, who also became known as Al-Hajj Malik El-Shabazz, reflected on his Hajj to Makkah in a letter to his friends. In his letter he wrote about how the pilgrimage breaks down all forms of skin deep differences and man-made barriers. Seeing pilgrims interacting as contemporaries led him to believe that Islam as a way of life could overcome societal problems like racism and discrimination.

The spirituality, the overwhelming spirit of togetherness, the importance of being human and the fulfilling of human rights, collectively practised by pilgrims were some of the factors that changed Malcolm X’s mind from being “anti-white to anti-racism.”

The symbolism is in the heart and in the mindset – a readiness to make sacrifices in our lives in order to stay on the Straight Path – Siraate Mustaqeem. Each one of us makes sacrifices in our life – small and big ones, giving up things that are enjoyable or important to us. A true Muslim, one who submits completely to the Almighty, is willing to follow Almighty’s commands completely and obediently. It is this strength of heart, purity in faith, and willing obedience that Almighty desires from every believer.

Hajj has its own unique qualities and life lessons; everyone who performs Hajj knows how it impacts on the purpose of life. The sea of pilgrims dressed in simple clothes praying and crying in the most vociferous expression of religious passion, is something that remains with the pilgrim for the rest of his or her life.

- Mohamed Saeed is a social commentator with a passion for probing the media headlines, critical thinking, creating waves and promoting fundamental rights, social justice, rule of law, dignity and values.

We live in a world where facts and fiction get blurred
In times of uncertainty you need journalism you can trust. For only R75 per month, you have access to a world of in-depth analyses, investigative journalism, top opinions and a range of features. Journalism strengthens democracy. Invest in the future today.
Subscribe to News24
Related Links
Muslim pilgrims mark final Hajj rite with 'Stoning of Devil'
Muslims around the world celebrate Eid as hajj enters final days
Hopes fade for Qatar residents to perform hajj
Next on News24
LANDISA | Growing up queer in an Indian South African family