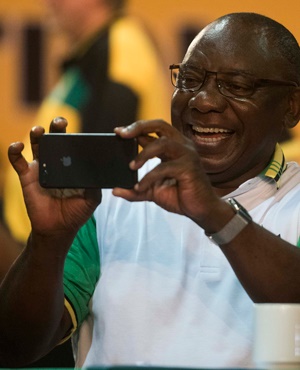 New president of the ANC Cyril Ramaphosa snaps pictures during the announcement of new party leadership at the ANC national conference at the Nasrec Expo Centre. (Alet Pretorius, Gallo Images)

It is the ANC’s newly found populism.

The poisoned chalice that Jacob Zuma had prepared for his successor means Ramaphosa would have to dance a delicate dance around issues like land expropriation and free tertiary education, without avoiding the tough steps demanded if the country’s economy is going to be stable and growing.

It’s a stark choice: join the populist chorus and be popular now, but within a year or two face the music of a collapsed economy, increasing unemployment and poverty, and possible public revolt.

The way out for Ramaphosa is to talk the populist talk, but quietly do the right things.

Like he did in Nongoma at the weekend, talking about the Garden of Eden that expropriation of land without compensation could bring – and then adding the caveat: If it leads to higher food production, if it doesn’t harm the agriculture sector or food production.

The ANC has largely avoided cheap political populism since it became the governing party, apart from occasionally allowing its Youth League to make wild statements.

But then Julius Malema arrived on the scene and refused to be controlled by Luthuli House, and populism gradually became mainstream politics.

That was the fertile ground the Zuma/Gupta axis – ably assisted by British PR firm Bell Pottinger – capitalised on, introducing the mantras of #WhiteMonopolyCapital and radical economic transformation into the national discourse.

These concepts have since been used as a machete to attack the constitutionalists and economic realists in the Ramaphosa camp.

Populism is a phenomenon that is researched widely in the world nowadays.

In his recent book, What is Populism?, Princeton University professor Jan-Werner Muller says that a rejection of pluralism is at populism’s core. Populists declare themselves to be the only legitimate representatives of the masses and divide the nation into two: the masses and the exploiting elite. Populists propose simplistic solutions for complex social and economic problems; they are strong on rhetoric and weak on policy.

In the case of Zuma, the Guptas and Co populism is actually just a cover for state capture, corruption and maladministration; an exercise to seek a scapegoat for the lack of development and the failure to provide better lives to ordinary people.

It is an effort to cover up the reality of many billions of rands stolen or misspent, billions that should have gone to development, and to obscure the terrible decisions that had led to economic downgrades and a weak rand.

The scapegoat is white business and the white minority generally, and of course those who are labelled as protectors of white privilege.

Zuma’s reckless, unilateral decree on free tertiary education on the eve of the ANC’s elective conference last month is an example of cheap populism. As is the EFF’s encouragement for prospective students to arrive at universities in their tens of thousands.

The way in which the land debate at the conference was steamrollered late at night, when everyone was exhausted and that ended up in a decision to change a key clause in the Constitution’s Bill of Rights, is another.

It was a bit like Brexit: a one-time referendum among ill-informed citizens decided by a simple majority that ended up changing the course of history.

Ramaphosa and people in the ANC who think like him were fiercely against expropriation without compensation, and argued quite rightly that the existing clauses in the Constitution allowing expropriation under certain conditions have never been used or tested.

Moreover, it is common cause that the state hasn’t shown the capacity to establish farmers on land already acquired for redistribution.

All these arguments were spelled out in detail in Kgalema Motlanthe’s voluminous Report of the High Panel on the Assessment of Key Legislation and the Acceleration of Fundamental Change, issued two months ago.

Ramaphosa cannot ignore the ANC resolution, so he would probably try to ameliorate its potentially catastrophic impact by slowing down the process and making sure the eventual amendment is very carefully worded.

This will not be popular. Neither would cutting state expenditure, another necessary step.

The populist genie has escaped from the bottle and it will be hard to put it back.

Ramaphosa’s task is to bring the reality home to his party that the only way real radical economic transformation that benefits more than a few can be achieved, is if the economy expands.

The uncomfortable truth that the populists will have to digest, is that the South African economy’s strength above most others on the continent is that it is part of the global economy. If government acts as if it isn’t, the economy will suffer, as we have seen several times during Zuma’s tenure.

Ramaphosa’s advantage is that his support as a national leader is much wider than is reflected by the narrow margin with which he won against Nkosazana Dlamini-Zuma at the ANC’s elections.

Even more importantly, even his enemies in the ANC have to admit that the ANC’s best chance of doing well during next year’s general election would be under Ramaphosa’s leadership.

That should focus some minds.

We live in a world where facts and fiction get blurred
In times of uncertainty you need journalism you can trust. For 14 free days, you can have access to a world of in-depth analyses, investigative journalism, top opinions and a range of features. Journalism strengthens democracy. Invest in the future today. Thereafter you will be billed R75 per month. You can cancel anytime and if you cancel within 14 days you won't be billed.
Subscribe to News24
Related Links
Expect swift action from the real, ruthless Ramaphosa
The future lies with us, the people - not the ANC
It's not as simple as 'giving back the land'
Next on News24
Unsure who to vote for? These are your options